As we've written before, the real key to the runaway success of Fab.com is the founders' curatorial eye and its deep relationship with designers to offer off-the-beaten-path, heavily curated objects of design lust. As Fab co-founder Bradford Shellhammer said to us, one reason the company was successful is because they "had the connections to sell prints from Milton Glaser on day one.”

Bamarang -- the Samwer Brothers' blatant rip off of Fab.com -- clearly doesn't have these relationships. It has a different method, which is to go to Fab and check out what items Fab has picked from a universe of options, and do one of two things. It contacts the designers and asks if Bamarang can sell the items also. If it doesn't hear back? No worries. It'll just find a third party distributor, buy up their inventory, and offer the same items as Fab anyway.

To be clear: Bamarang is no longer just ripping off the idea or the design elements, as Fab CEO Jason Goldberg outlined in this post. It is now trying to rip off each actual item for sale, whether the designers agree to sell on Bamarang or not.

We've heard of close to a dozen examples of designers who had no clue their goods were being sold on Bamarang until someone forwarded them an email from the site trumpeting the sale. Here's an example: 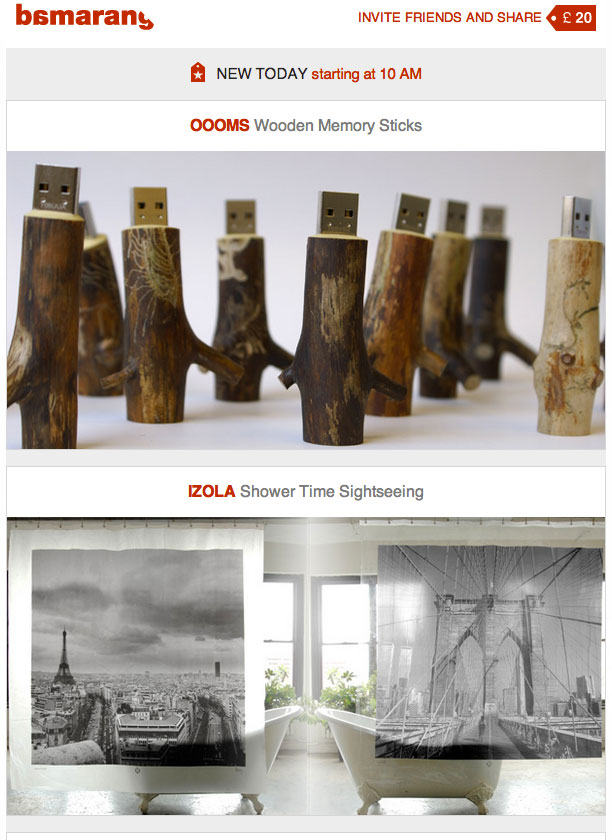 Izola, the company who makes the shower curtains above, has been a Fab company from day one, thanks to personal relationships with the founders. They never once heard from Bamarang, had no clue who was behind the site, have no idea how the company may have gotten the shower curtains, or if they actually sold on the site. "I have no idea who Bamarang is," said Neil Rasmus of Izola. "They've never contacted us, and they were sending our logo out on at least several, initial emails, promoting a website we didn't even know about."

This isn't the first time the Samwer Brothers have misrepresented deals to an unsuspecting audience. Back in 2010, Groupon's Brazilian arm -- under Samwer management -- advertised a raft of fake deals, including fake pictures of places that didn't even exist. The justification at the time was that they were showing the types of deals they could offer, without, you know, actually labeling them as examples. In other words, they were misrepresenting the business.

In the case of Bamarang, it's unclear if the goods in these cases were ever sold on the site or not. The designers I spoke with literally don't know. It's very possible that the emails went out saying there were only two items left, and then they just labeled the items were sold out. In some cases, it seems a small amount of inventory was bought out from a distributor and sold on Bamarang.

If you're a designer and you have more information, we'd love to hear about it. Many have been reluctant to speak on the record.

Fab, on the other hand, has been unafraid to draw a line in the sand with Bamarang. It stops short of telling designers they have to pick between the two; they can do business with whomever they want. Fab just wants designers to know the kinds of people the Samwer brothers are and the type of companies they start. When they get a Bamarang promotion, touting a designer Fab has a relationship with, Fab emails the designer to let them know and explains what exactly Bamarang is. Frequently, it's a surprise to the designer.

Goldberg didn't mince words about it on his site when Bamarang launched:

"Let me put bamarang and the other copycats on notice. Ripping someone off is not going to work in this space. Knock-offs are just bad design. Users will see right through it. Such tactics may work in some industries, but not in design. In design, customers are smart and customers value real authenticity. Do something original or don’t do anything at all."

To the designers I spoke with, it's an effective message. Fab doesn't have to give them an ultimatum.

Artist Loz Taylor isn't a Fab vendor and was actually was approached by someone from Bamarang. He initially agreed to sell his goods on the site, until he Googled them and saw Goldberg's post. He called and asked Bamarang to pull the page the day it was supposed to go live, out of principle.

"I didn't want to go against Fab," he said, even though he's never done a sale with them. "As an artist I do understand the concept of fair use and appropriation, but this went to the extreme. It's a complete and utter copy of their site, right down to the color scheme. It didn't sit right at the time and doesn't now.

Rasmus added, "I don't think Fab has anything to be worried about. We've worked with them since their launch, and we've known several people there for a long time. I'm sure most vendors will be loyal to Fab, when it comes to anything that is a pure knock off."

There are three reactions to the Samwer Brothers ripping off your site. You can throw millions of dollars at them as a reward (like Groupon). You can ignore them (like most of the Valley). Or you can call them out, like Goldberg has.

It's bad enough that Bamarang is ripping off Fab's design elements and misrepresenting its relationships with designers. But when it comes to Samwer clones of companies like Airbnb and Square, there are far more dangerous ramifications of such shoddy, sleazy shortcuts.