Let's Build a Future Without Cars

Last night at PandoMonthly (Brilliant! Inspiring! etc), Peter Thiel discussed the challenge of innovating as opposed to competing. He has talked before about Silicon Valley focusing too much on 140 characters and not enough on flying cars, which is an awesome thought. But I think we can go one better. After all, flying cars are cool, but do you know what's cooler? No cars at all.

If you step back and think about it, cars suck. For a start, the car is old technology. Karl Benz invented the first one back in 1886, and despite what those ads featuring Roger Sterling tell you, there really hasn't been much advance in car technology in the intervening 126 years. Okay, so they now come with Internet radio, heated seats, and rain-sensing wipers. But they still run on four wheels, they still greedily consume fossil fuels, and they still can only drive on roads. Which is the other problem.

Roads are old technology too. We spend billions of dollars a year to flatten and tame vast tracts of land so that these clunky four-wheeled inventions can move us from place to place. Then we spend billions maintaining them. One reports estimates that the US needs to spend $2 trillion updating its crumbling infrastructure, of which roads represent the biggest cost. These hard, unfeeling strips of anti-ecosystems exist only to facilitate the movement of motor vehicles. All that money, all that waste, all that damage to our planet: It’s simply because we haven't been able to come up with a better idea than the car.

If we knew the full truth about the scale of wretchedness the car and its accompanying roads would have wreaked on society, we never would have let it get past the Model T.

The car has become so central to our lives that we have designed almost the entire living experience around them, especially in the US. We sacrifice a stupid amount of our urban areas to roadways and parking lots. We blow up the sides of mountains so we can wind cement ribbons around them. And we pollute rivers, build over burial sites, squash forests, invade farmlands, and plow through quiet neighborhoods with flat tracks of tarmac.

Big, gaping garages – or their rollaway steel doors – dominate the front-facing features of our homes. WalMarts, Targets, and mega-malls don’t even bother catering for the pedestrian shopper.

The car is bad for our health, too. As Slate points out, long commutes in cars are linked to obesity, neck pain, loneliness, divorce, stress, and insomnia. Exhaust emissions can do a whole lot of nasty things, as well as contribute to climate change. Over a period of nine years, nearly 370,000 people died on US roads.

And yet we not only accept the car as a part of everyday life, but we worship it as a symbol of freedom and status, a moving monument to personal wealth and mobility. We fetishize it in popular culture, reproduce its image in high-definition gloss, idolize it in orgiastic expositions.

We sacrifice ourselves and our environment to these death traps, health hazards, planet killers, money sucks; these land-grabbers, respiratory rapists, and insidious isolation engines. And for what? The pleasure and convenience of rapid movement? That's a problem we can solve in other ways.

Dream with me for a moment. It's not that hard to think of a world without cars. Much of the technology we need to replace them already exists. What we're so far lacking is the willpower, political commitment, and imagination to implement it on a wide enough scale to change the world. (And yeah, none of that is trivial; I’m not totally naive – only a little.) Silicon Valley, with all its wealth, intellectual resources, creative thinkers, and alleged determination to change the world for the better, has to lead the charge on all these fronts.

So let's build more bullet trains and hovercrafts. Let's extend, upgrade, and renew our subway systems. Let's invent the 'super scooter' – a speedy, clean alternative that takes the place of the single-occupancy commuter car – and push forward with flying cars. 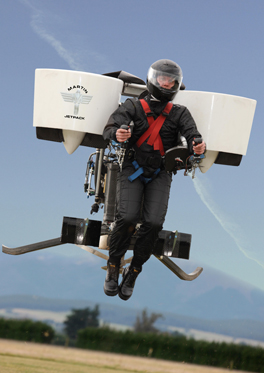 Let's apply Google's driverless-car technology to buses and motorcycles (just in the meantime, until we can get rid of them, too). Let's build more flyways between buildings, and innovate with horizontal elevators that operate on the outside of, and in between, edifices. Let's build amazing cycleways that are a pleasure to ride on. Let's adapt T-bar ski-lift technology for short-distance commutes (What? That one too much?).

Let's think about maglev technology for private vehicles and create awesome jet-packs for travel across water and through thin air. Let's supply developing countries with bio-fueled tuk-tuks and master the art of bio-fueled commercial aircraft.

Yes, all this would be horribly expensive. Maybe society can't afford it. But can we continue to waste money on roads that fill up faster than we can build them, only to spend more money on the impossible task of maintaining them all? Can we afford to sacrifice our health and well being at the altar of the private vehicle? How much more of our planet are we willing to give up so we can prolong the era of the car?

By getting rid of cars, we would also be doing away with the many industries and sub-industries that have evolved around them, from repairs to gas stations to road painters to garage door manufacturers. But we can rebuild our economies by rebuilding transport. Why not redistribute our resources and labor from car-based industries to a totally new transport paradigm?

Today, the idea seems crazy. But our greatest technology minds have solved harder problems. Just stop for a moment and think about what had to happen for us to put a man on the moon.

We are mere primates who evolved over millions of years to reach a point where we could consider an environment beyond the next grassy field or fish-filled lake. One day, for whatever reason, we started looking beyond oceans and mountains, beyond treetops and clouds, beyond the sky and into a deep, dark unknown that we decided to call Space. Not only would we come to understand (at least a little) an incredible universe of which our planet occupies less than a pixel, but we would build a capsule made of a mineral we mined from the earth. We would combine that with the fire we once used only to cook fresh kill. We would power it with electronics that we magicked up from our imaginations. And we would put a couple of human beings inside.

Then, we pointed this insane contraption at distant satellite in a mysterious Space and propelled it upwards from the ground. Not only did this machine cut through the clouds and out of the only world we had known for the 200,000 years of our collective existence, but it also landed on that weird pock-holed planet. Then, two dudes named Buzz and Neil opened the door, stepped outside, and walked on the freaking moon.

That, my friends, is crazy. If we can do that – and with no help from the Internet! – then we can find an alternative to the humble car. Then our grandkids can look back and say, with good reason, "That was the greatest generation."