From the Mean Streets of Baltimore... An App for DIY Home Improvement

Of all the things to emerge from the troubled inner-city streets featured on HBO’s "The Wire," few would have guessed that an app for DIY home renovations would be among them.

Gus Sentementes was, for a time, the main crime reporter at the Baltimore Sun, a position previously held by "The Wire" creator David Simon. Sentementes wrote about gangs and murder, covered the drug violence that eats away at the inner city, and helped create the newspaper's first online homicide map. Eventually, he got burnt out and sought the more gentle terrain of tech reporting.

Over the last three years, Sentementes has seen Baltimore’s tech scene grow from an anemic no-hoper into a buzzing community stuffed full of regular events and meetups. The city hopes to reinvent its post-industrial tech scene on the backs of talent from the nearby University of Maryland’s excellent Computer Science program and programmers emerging from the state’s cybersecurity sector. Earlier this month, hometown mobile advertising company Millennial Media surprised the tech world by raising $132.6 million in its initial public offering.

Some of the magic just had to spread. And indeed, Sentementes found himself itching to build something of his own. “I confess to having a bit of Stockholm Syndrome,” he says. “I’ve talked to so many optimistic entrepreneurs that their enthusiasm has really rubbed off on me. The energy is contagious.”

So, even though last July his wife gave birth to twins, the 37-year-old reporter decided to build an iPhone app that would let people track their home improvements and share their progress with their social networks. He bootstrapped it, working with an iOS developer in Austin and a Baltimore designer, and spending an hour on the project here and there over five months.

He would come to call the app NestPix, and today it officially launches.

Sentementes struck upon the idea, which is totally independent of the Baltimore Sun, after being frustrated by the housing market and realizing he couldn’t do much work around the house anymore, because he was always changing diapers. He decided he needed a app that would help him track his projects, get feedback from a community, and perhaps find a good contractor or two. 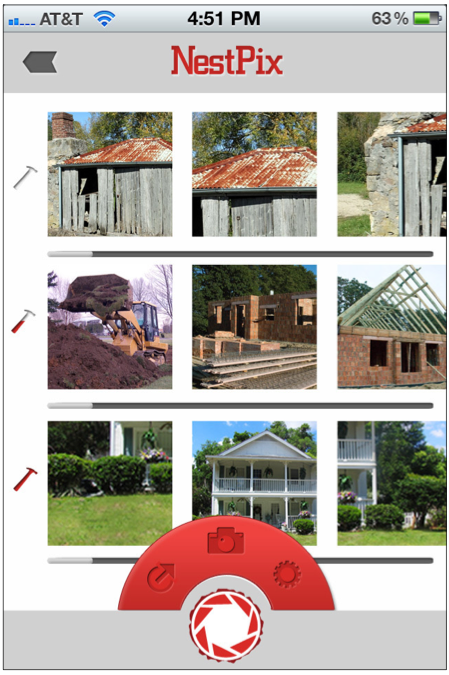 NestPix is based on a simple concept: You take photos of your before-and-after projects and drag them into "project folders" within the app. You can then share the folders with your social network, or with the rest of the NestPix community. You get the first folder free, but beyond that you have to pay 99 cents for a three-pack and $1.99 for a seven-pack. That’s a risk – getting users to reach into their wallets is asking a lot, if only because it adds friction to the social-sharing experience, which is central to the product's success.

It’s also not the only player in the space. Houzz is the dominant home-improvement app, but it is focused largely on professionals. In the true Baltimore spirit, NestPix is a strictly DIY affair, eschewing professional offerings in favor of community feedback and recommendations.

Sentementes is taking a mobile-first approach, starting with the iPhone app. The next step will be an iPad app. A full-blown companion website that lets people sync their home projects across multiple devices is also in the works.

If a successful bootstrap DIY home-improvement app were to come out of anywhere, it might as well be Baltimore. The city of 600,000, still smarting from decades of de-industrialization, has 16,000 vacant homes. But it'll take more than an app to fix that.