Ethical Shopping and the Guilt Trip: A Love Story

After the Founder Showcase in San Francisco on Tuesday night, I was in a bar chatting to Adriana Herrera about her shopping-with-a-conscience startup, Fashioning Change. The company’s goal, she said, was to direct consumers to environmentally friendly and ethical purchase choices for “on and in your body."

“Oh!” I replied, pouncing on the in part of that line. “Like tampons?”

Herrera didn’t quite audibly gasp, but her shocked silence was enough to momentarily derail the conversation. Turns out she was talking about food. I was talking about green-friendly alternatives to women’s sanitary products, which, in my defence, some people think are pretty toxic. Oh, well!

Once we got over the discomfort, Herrera told me about how Fashioning Change was about to launch a new product recommendation tool called Share the Goodness.

Essentially, if you have an account with Fashioning Change, this tool pulls in all your Facebook friends, takes note of their interests and Likes, and then matches that data to fashion items within the Fashioning Change catalog. You can annoy your friends by pointing out that instead of buying that top from J Crew, they really should consider this alternative from Fashioning Change, which is the same price and style but doesn’t kill any polar bears. 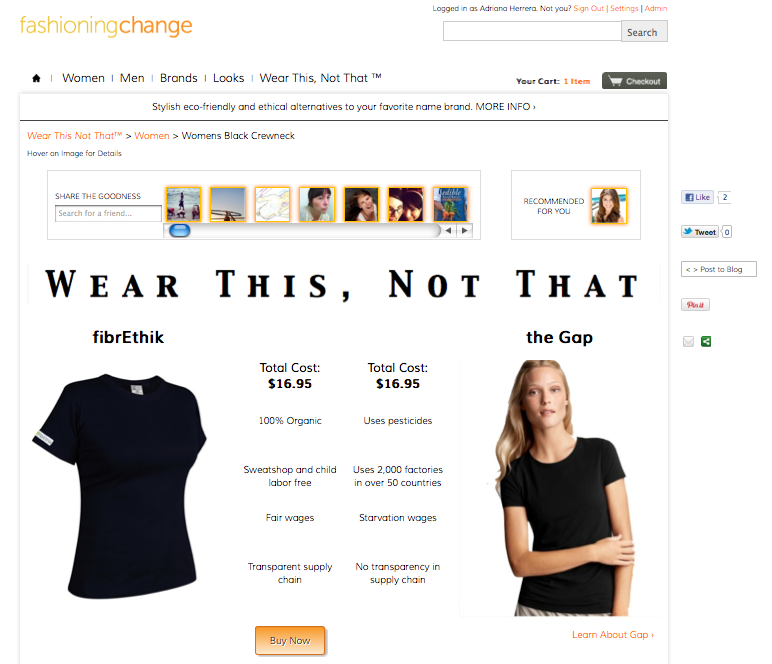 Anyway, that launch happened today. By all means, go and see how it works. But I’m more interested in the psychology behind this process, and the opportunity for ethically minded Internet businesses to exploit our guilty consciences in the name of good.

Fashioning Change is already beta-testing a great called Wear This, Not That, which invades any big-brand shopping sites you may be browsing and offers ethical alternatives to clothing items you may be interested in. You can also use it from the Fashioning Change site, where you can select a number of fashion retail brands and search for better alternatives.

The tool will also tell you what good you’ll be doing by buying from Fashioning Change instead of the mainstream option. For example, if I buy a United By Blue messenger bag, instead of one from J Crew, I not only save $19, but I also give my money to a company that “removes 1 pound of trash from oceans for each product sold” and get a product that is 100 percent organic cotton. On the other hand, the site tells me, J Crew has a lack of transparency in its supply chain and no commitment to eco-friendly manufacturing.

I admit I’ve bought clothes from J Crew online, and I haven’t given a second thought to it. The store is well designed, the clothes look good, and the price is right. Of course, I’d like to say I’d prefer to buy green-friendly options, but my inherent laziness and the big brands’ effectiveness at making it easy to get their clothes ensure that I will mostly go the ocean-poisoning route.

By adding the Share the Goodness option, Fashioning Change allows you to spread the guilt on thick across your friend network, as well as brag to people about how amazingly Whole Foodsy you are. It also helps create a viral effect for Fashioning Change’s marketing.

This could quickly piss off a number of your friends, but my bet is that they’ll be afraid to admit it. We now live in an age in which people pay a lot of lip service to responding to climate change and human rights in China, but in which they take very little action to address either (see: slacktivism).

So, instead of griping, your friends are likely to join you in bugging people to buy tree-friendly T-shirts. It not only makes them look good, but it might even get them laid.

If Fashioning Change could build in an individuated affiliate-marketing feature (like this one) that gives discounts to consumers who are spreading the word via their social networks, then it would be an even more powerful proposition.

This model could provide a crucial next step in converting Kony 2012 fans into actual contributors. I hope other ethically minded causes are watching closely.