Here's a Social Shopping Site That Could Undermine Pinterest

Yirong Xu, a mild-mannered and spectacled gentleman who carries a backpack and a master’s degree in data mining from Stanford, is perhaps not who you would expect to find as head of one of the world's most popular social shopping sites for women.

When Xu returned to Beijing from California in 2003, he decided to put his engineering prowess to work by starting his own company. He built an RSS reader, just like Google Reader. After selling it to culture community Douban in 2010, Xu turned his mind to a softer science – studying how people like to shop.

On September 27, 2009, he was sitting with a female friend in a Beijing shopping mall when he was struck by a revelation. He noticed all these groups of girls walking past. People, he suddenly realized, like to shop together. Until then, however, online shopping in China was a very solitary experience. As is mostly the case in the US, there were no mechanisms for discovering what your friends were buying online, or what they were interested in buying.

That's how he stumbled upon the model for Meilishuo, which has become one of China's leading social shopping sites for women. Think of it as a more focused and more commercialized version of Pinterest. Then ask yourself why it doesn’t exist in the US.

Meilishuo, which means “beauty talk” and is one of China's fastest growing Internet companies, is racking up those sorts of head-spinning numbers that we are becoming accustomed to seeing from the world's largest Internet market. As of March, it had 2.5 million daily active users, and 130 million daily page views. Xu says it sends 4.5 million shopper referrals to fashion retail sites every day, and leads to an estimated US$125 million in ecommerce transactions every month. By the end of 2012, Xu expects the site to have 6 million daily users. When I talked to him in San Francisco recently, he said the site now has 3.5 million daily users.

Like Pinterest, Meilishuo taps into the power of human curation and image sharing. It targets only white-collar women in China, an increasingly rich demographic that numbers between 50 million and 100 million. These potential shoppers can share items they find from shopping sites that are then displayed as images in a personalized catalog. They do so via bookmarklets and, more frequently, by copy-and-pasting links from the shopping sites into Meilishuo – a slightly cumbersome practice that has been habituated in China by long-ingrained use of the ubiquitous QQ instant messaging service. As with Pinterest, Meilishuo collates only the main images from each site, so users can build visually striking collections. 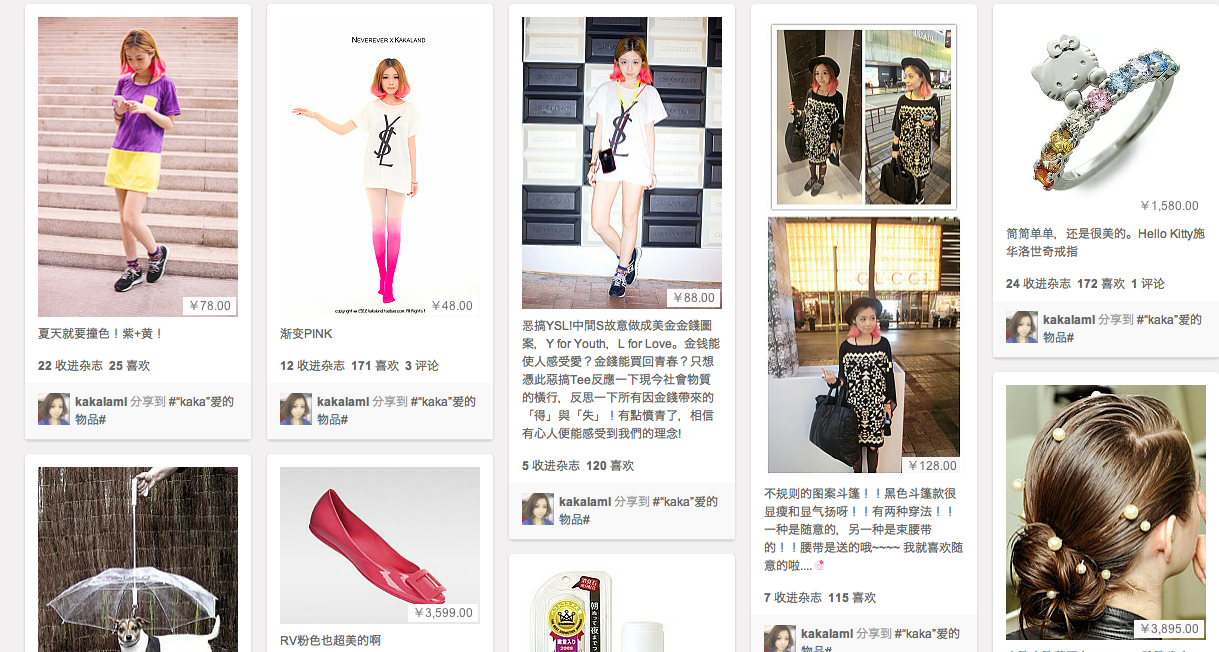 Their friends, as well as casual users, can then browse those catalogs for shopping ideas. In new-money China, where groupthink and status-driven shopping are especially prevalent, this social approach is particularly compelling.

Xu says there are three types of Meilishuo users: Super-users who produce most of the content and use the platform as conduit for personal expression. These users can be celebrities, designers, or just particularly engaged users. Then there are the consumers who regularly browse and share content from the catalogs, serving as viral conduits. And finally, there are the "mass users," who come to the site on a casual basis whenever they need to buy something.

Many users also use Meilishuo's iPhone app, the latest version of which was released in August. The app enjoys a freakish 24 minutes of engagement per user per day, and its peak hour is 11pm, when tired office workers sit back and browse the catalogs. Because it’s difficult for users to conduct transactions of more than about US$8 a time (the third-party platform has a low cap), they mainly use the app to save items they might like to buy later, often when they get to their desktop computer at work the next morning.

So back to that obvious question: Why doesn’t a similar service exist in the US? Pinterest, which likely plans to make money using a similar lead-generation model and last week raised $100 million in a funding round led by Japanese ecommerce giant Rakuten, has proven that American users are willing to share ecommerce content with their social networks.

But Pinterest doesn’t have the tight focus of Melishuo or Mogujie. Xu makes no pretence of appealing to everyone. Meilishuo, he says, is only for white-collar women, and jokes that the 2 percent of its users who aren’t female are probably just industry analysts.

Xu says Pinterest is an example of how American Internet companies tend to take an architecture-driven approach to their businesses, while Chinese Internet companies try to solve existing problems for consumers. China lacks a strong established retail infrastructure, especially outside of Beijing and Shanghai, so ecommerce is very important.

While Pinterest has proven extremely adept at building a social network, its revenue model is yet to be proven. Given a more dispersed audience, it may well have more difficulty driving profits and attracting brand advertising than does its Chinese counterparts.

As Mogujie’s CEO, Chen Qi, told China Daily, “On Pinterest, users tend to collect pictures they regard (as) interesting and beautiful, while Chinese users prefer to collect pictures of apparel and cosmetics they want to buy. It will naturally lead to online shopping."

By this logic, there is room for a Meilishuo-like service to do well in the US, perhaps as a vertical offering that slips under Pinterest’s umbrella. Or perhaps Pinterest will look to create its own verticals. Either way, Pinterest will have a strong challenge on its hands.

Over iced tea in San Francisco, I asked Meilishou’s Xu what he thinks. His response: "I don't see any reason it cannot happen here."