With Barely a Whisper, SnappyGo Has Turned 10,000 People Into Part-Time Travel Agents

The travel agent is not dead. Those words, in fact, are just changing meaning. Increasingly, we are all becoming travel agents, sharing tips and pics on Facebook, writing restaurant and spa reviews on Yelp. We’re just not getting paid for it.

A new startup called SnappyGo has risen up, all Airbnb-like, to give us all the chance to make money from our fine travel tastes and local knowledge. The website matches travelers with like-minded and self-appointed “travel advisors” for any given destination. The advisors make customized recommendations for individual travelers based on their particular needs and charge a small fee for the service.

And the news today? SnappyGo has just signed up its 10,000th advisor – all without a public launch.

SnappyGo is the newest of a bunch of travel startups trying to reform the industry. Searching for flights and hotels has become too arduous, the thinking goes, when technology’s promise was always to make the travel planning process easier. Responding to an era in which the value of human curation is just being realized – my boss Sarah last year referred to it as “Revenge of the Travel Agent”, and I discussed the phenomenon with NextDraft writer Dave Pell – the company combines peer-to-peer travel advice with the power of social search, links to booking engines, and on-site instant messaging for discussions with advisors.

The company plans to make money via numerous means. It will claim a commission on sales conversions it sends to booking sites such as Expedia, HomeAway, and Viator (the same way TripAdvisor makes the bulk of its money). It will run display ads. It will take a 30 percent cut of all peer-to-peer display ads. And it will also allow travel agencies to use its platform to offer their services – and charge them a fee for the privilege.

The New York Times recently highlighted the rise of travel agents and noted that one in three leisure travel agencies is now hiring, while travel agencies last year experienced their second successive year of growth. That’s not to say all the numbers are encouraging. During the industry’s mid-1990s peak, the New York Times reported, there are about 34,000 retail travel agencies in the US, compared to just 15,000 today. But online travel booking has become so onerous that 20 percent of 2,000 international travelers in a recent survey said it took them more than five hours to search and book travel online, while almost 50 percent said it took them more than two hours.

It seems what the market wants, then, is something that blends the human aspect of travel planning with the automated convenience of search. Something like SnappyGo. And Jetsetter. And MyGola. And Trippy. And Gogobot. And Fortnighter.

While those sites use friend recommendations from social networks or advice from paid experts, however, SnappyGo relies on a vast network of everyday citizens who have specialized local knowledge. Just as Airbnb turned homeowners into casual hoteliers, SnappyGo turns regular folks into moonlighting travel professionals.

Camilo Gomez, an ex-banker from Colombia, founded the company with Louis E Garcia in February. A few years ago, the two founded Mantaraya, which is Colombia’s leading online travel agency. They have passed Mantaraya to a management team so they could move to Silicon Valley and concentrate fully on SnappyGo, which has a larger potential audience with international reach. They have their eyes on an online travel bookings market that is set to surpass $313 billion in 2012, according to PhoCusWright Online.

Gomez says the founders invested $100,000 of their own money in the company, and they’re now about to seek angel investment. The founders expect to grow their Colombia-based engineering team from three to about 15 people within a year. While SnappyGo is incorporated in the US, it will keep its engineering team in Colombia, which competition for talent isn’t so intense and where the cost of an engineer is about a third of the going rate in Silicon Valley.

Human curation is at the center of the SnappyGo experience, says Gomez. “If we’re not doing that,” he offers, “then we’re not doing anything.” He looked to dating sites such as eHarmony and Match as models that show the power of personalization. “All businesses on the Web must think about personalization, or else basically they will go out of business,” he says.

SnappyGo is off to a strong start. So far, the company has attracted all 10,000 of its advisors through social media campaigns. The next challenge will be attracting actual users. Gomez says the focus has been on building a network of advisors so an infrastructure was in place by the time users arrive at the site. SnappyGo hasn’t spent a cent on marketing to potential users. That will change when the company secures funding and ramps up its promotional efforts. 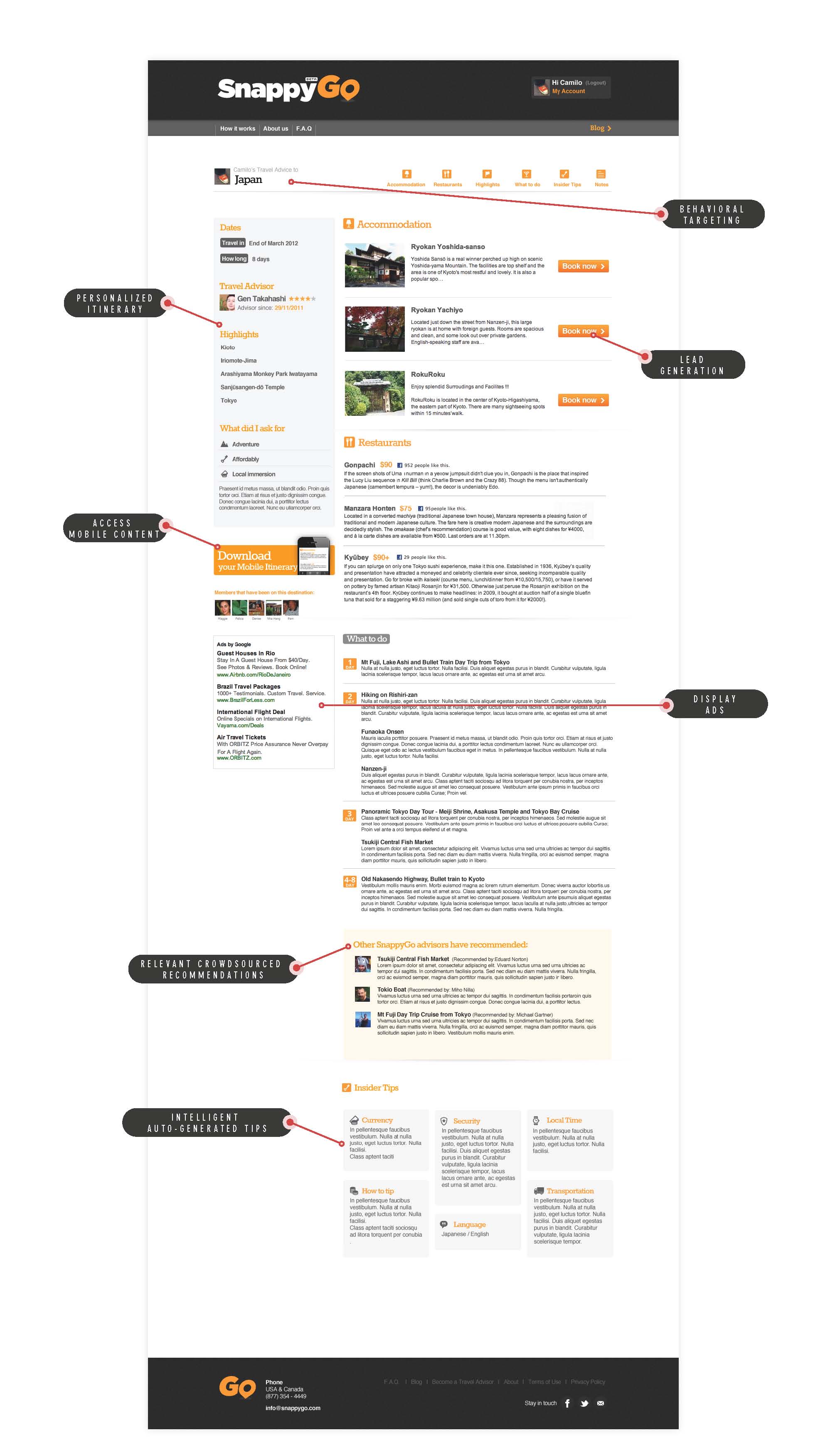