Sneaking in From Canada, Gijit Promises to Take the Pain Out of Organizing Meetings

Of all the mundane tasks that mess up life and sap precious minutes from our days, setting up meetings via email has to rank among the most annoying. A startup out of Toronto called Gijit is trying to fix that.

Gijit recently, and very quietly, launched as a browser extension for Chrome, Safari, and Firefox that installs itself as a sidebar in Google Calendar. It helps you manage the next 48 hours of your life. It tells you who you’re due to meet, gives you background on that person, along with a mugshot, and it helps you pick a place nearby to meet, or even to park your car. Soon it will let you book a cab just in time for your meeting. Most excitingly, it will also offer a smart, automated assistant that will scour calendars to find a meeting time that best works for everyone.

From an aesthetic and usability perspective, Gijit is a lot like Rapportive, which shows you rich contact information about people you’re corresponding with in your email. The difference is that Gijit sits inside Google Calendar and takes advantage of location data as well as whatever social data your contact has chosen to share.

Gijit founder Andrew Draper says the company intends to not only help people manage their calendars, but also manage their own lives. “For some people, we’re trying to be your assistant’s assistant, or we can be the assistant you don’t have but you need,” says Draper, who also co-founded Toronto-based men’s underwear delivery service Manpacks.com.

Draper, along with his co-founders Mike Potter and Marc Meszaros, chose to focus on a 48-hour timeframe, because from a productivity standpoint that often represents the window of time that matters most to you. Anything beyond that is a problem for your future self.

Gijit is publicly available right now, eschewing the “beta” approach in favor of just launching and iterating. It’s only two weeks old and is still very much a work in progress. A mobile Web version will be available in two weeks, with native apps for iPhone and Android soon to follow. Perhaps its killer feature – what Gijit calls “Smart-Invite” – will also launch in two weeks. 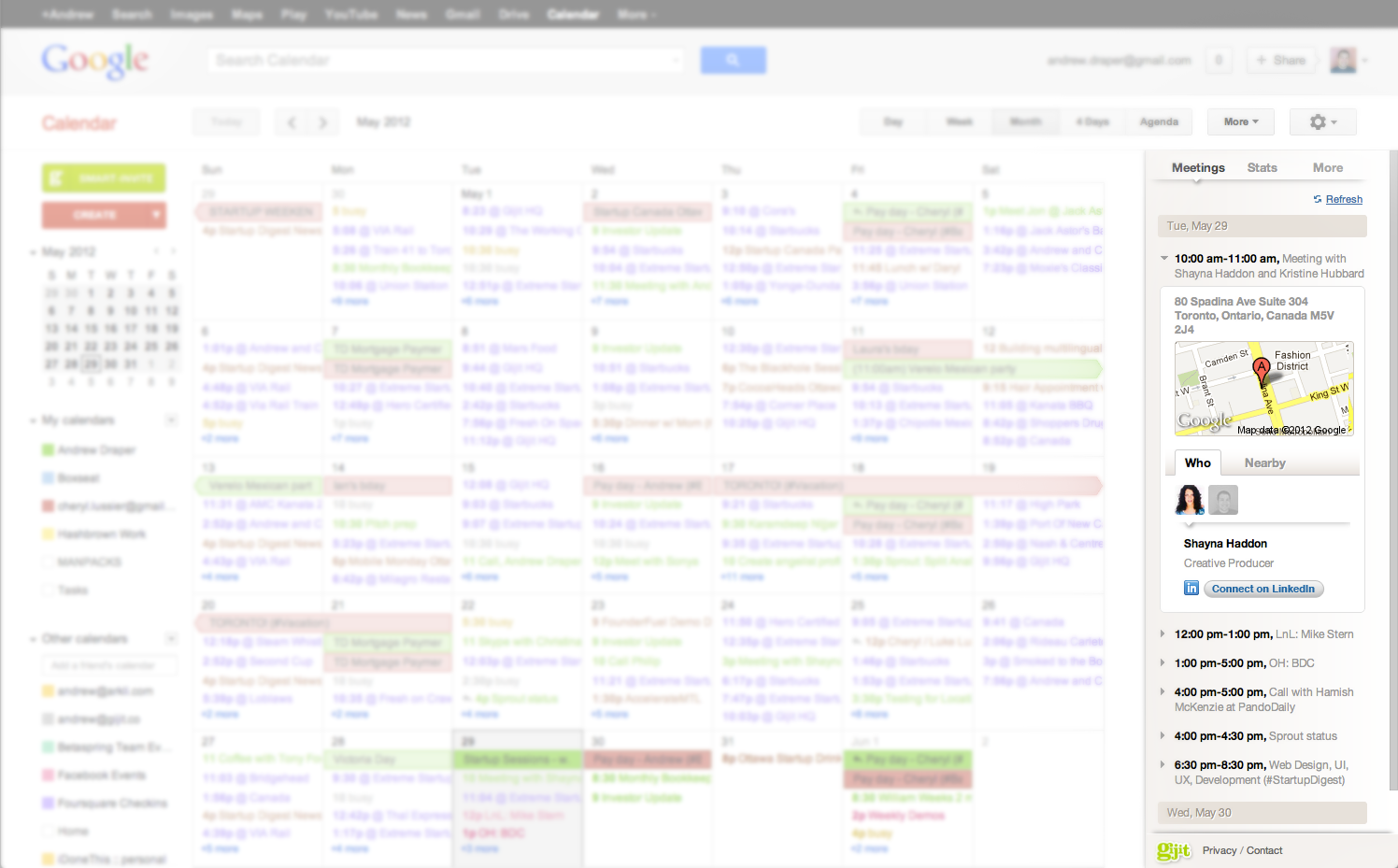 When you click the "Smart-invite" button, you'll get an interface that allows you to input the email address of the person you're meeting. If they’re also a Gijit user, the service will look at both people’s calendars and find the best times to meet. Then, based on the participants' respective locations, it will intelligently suggest a meeting place.

Clearly there’s a big red flag on privacy for this service. Draper is anticipating the push back and says the company would only ever try to monetize data once it has been completely anonymized. “We’re really aware of it and are very careful around that, for sure,” he says.

The founders plan to monetize Gijit with a freemium-premium model much like Evernote’s, in which a set number of features are available for free, while others can be unlocked with a fee. There are also opportunities for lead-generating referrals, helping to drive bookings for flights and hotels, for instance, similar to travel portal Kayak's model. Based on location data, Gijit could push ads for potential meeting locations – restaurants, cafes, and bars – to the top of the suggestion list, noting that they’re paid results. It may also suggest partner cab companies for those last-minute taxi rides.

Gijit is a participant in Toronto-based incubator Extreme Startups, which contributes $50,000 to its companies. It will likely seek funding in the months following the Extreme Startups Demo Day, which takes place on June 19.