Today I visited Google's new co-working space in East London. It rules. Called Campus, the five-storey building hosts more than 90 startups and is helping to consolidate and feed an emerging tech cluster that Startup Genome recently said is the third most active in the world, behind only Silicon Valley and New York City.

The space is only two months old, and it is already buzzing with the energy and optimism of a tech scene that is clearly growing fast (despite the dire state of the surrounding economy). It is a haven for cash-strapped entrepreneurs. For instance, they can come to the garage-like cafe on the ground level, run by Central Working, and work for free while availing themselves of wifi, great coffee, and tea provided by start-ups, and bumping into some of the most important people in London's tech community.

"This is an open source building," Eze Vidra, Google's head of Campus, told me. Each of the floors is run, or co-run, by a partner incubator or accelerator. SeedCamp, TechHub, Springboard, Coadec, and Startup Weekend all maintain operations in the space. Vidra (pictured above) is the only Google employee at Campus. The project is so new that Campus only yesterday started its registration system for people who want to work in the space for free. At its grand opening party eight weeks ago, Google literally launched a small rocket out of brick chimney on its outdoor patio (well, with the help of a rooftop crane).

It has already attracted some big names. A couple of days ago, Google CTO Patrick Pichette came in for a free-ranging Q&A session. Today, Prime Minister David Cameron's innovation advisor, Tim Luke, was in the house. 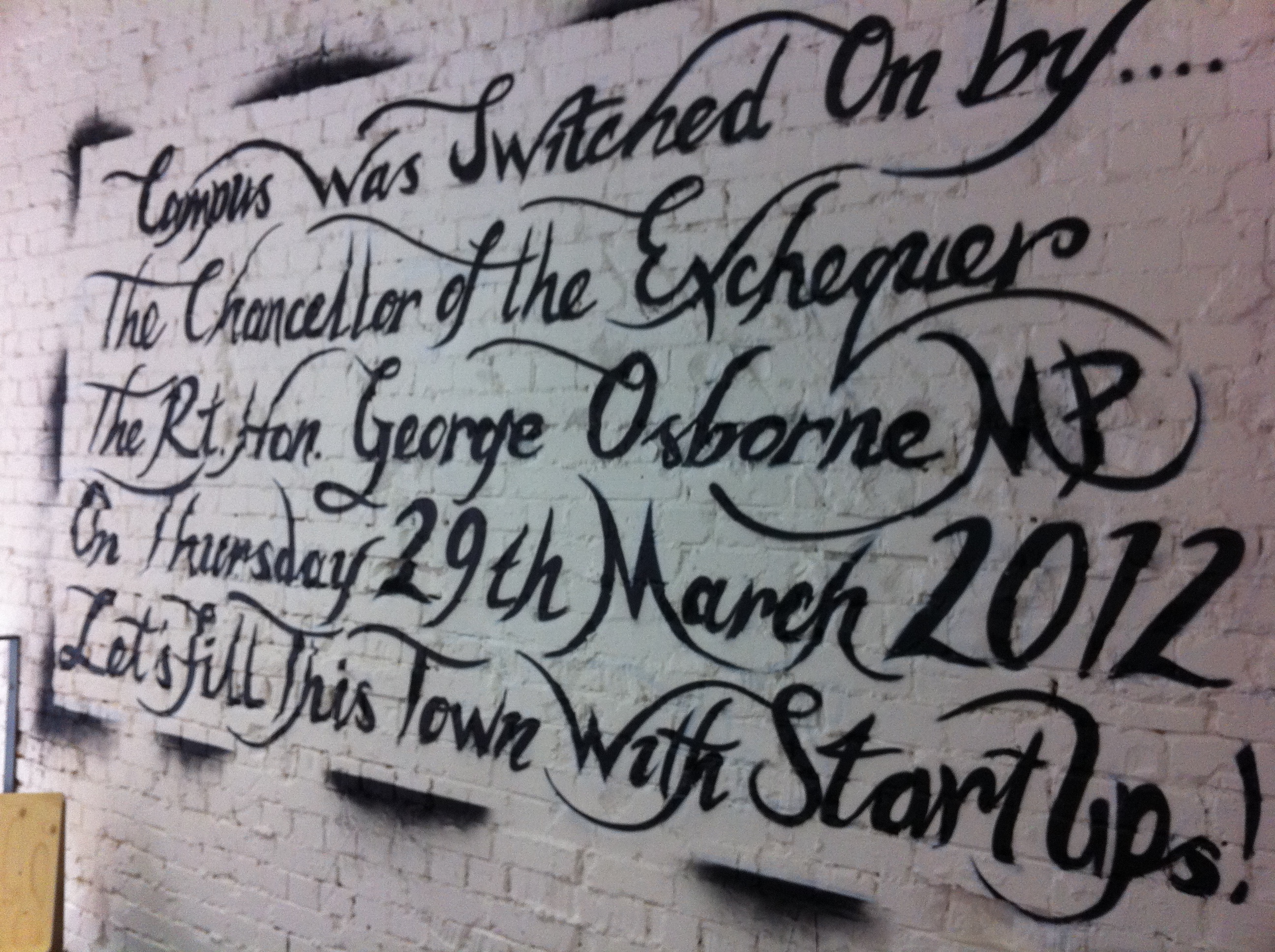 Vidra, an amiable Argentinian who arrived in London by way of Israel, San Francisco, and New York, says the goal of Campus is to provide free or cheap real estate for startups in a city where it can be frighteningly expensive to rent space. It's the first time Google has done anything like this. "We're investing in start-ups in the sense of community," he says. It's not, he swears, an attempt to get an early look at potential acquisitions. "We don't need a building to find companies."

Google is investing in the not-for-profit platform as a way to give back to the community, which is reflected in the pro-bono mentoring work done at Campus by many of the search giant's London staff. That sounds like PR speak, which it partly is, but when you visit the space it's hard not to believe in the vision.

Take Jody Orsborn, for instance. Eighteen months ago, the 27-year-old was a music blogger in Los Angeles. Now, after spending a year doing a master's degree here, she has started her own company with a couple of British friends. The company, The Backscratchers, promises to help creatives collaborate easily on projects. It's part of Springboard's accelerator program on the third floor of the building and is due to launch in a couple of weeks. 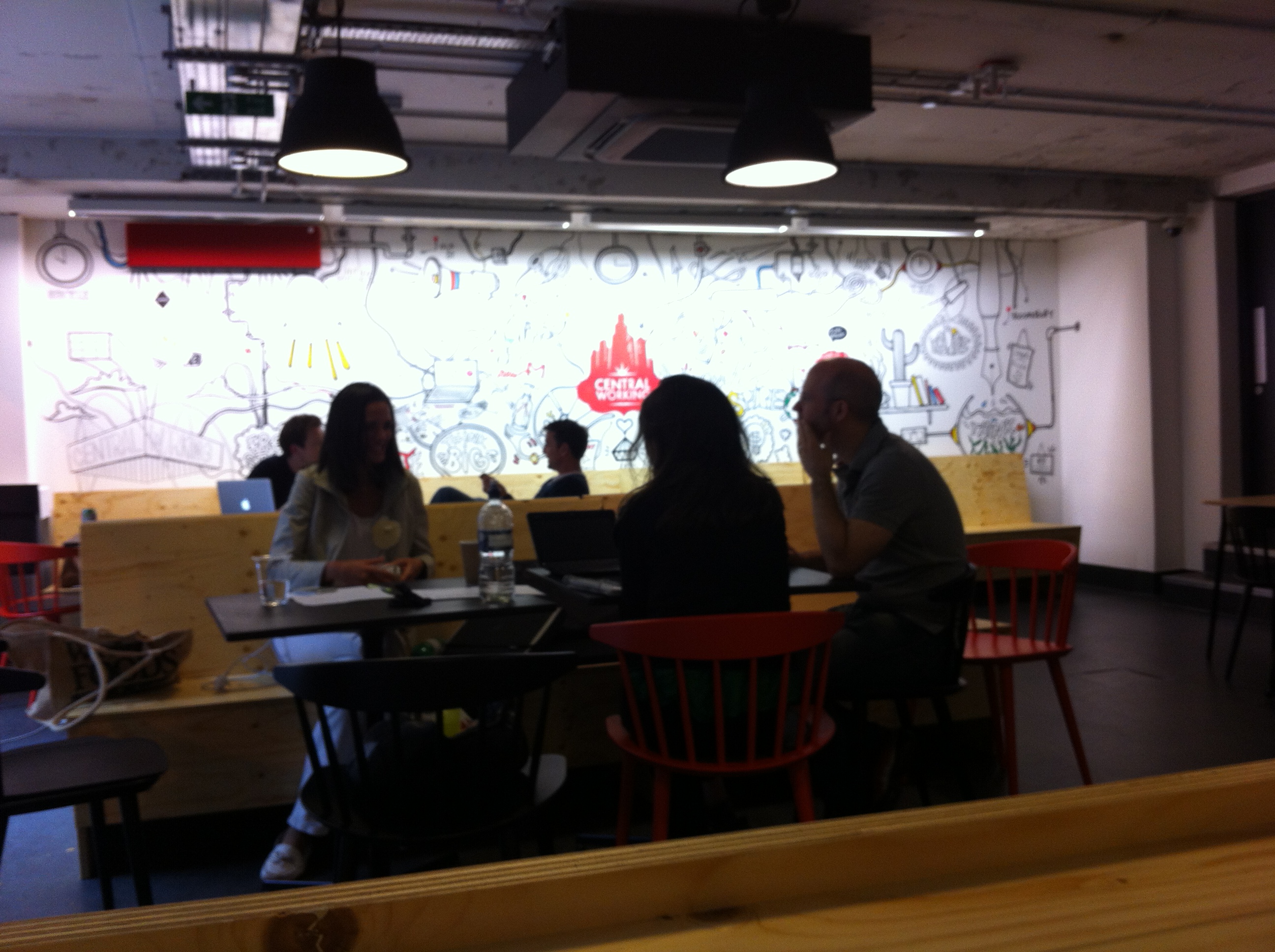 "It's such an amazing way to stay connected with people," Osborn says of the Campus environment. Before arriving here a few weeks ago, she knew three people in the tech world. She now knows a bunch of VCs, angel investors, and fellow entrepreneurs who share the space. Recently at one of Google's Big Tent events, she met the manager of Radiohead, which for a music blogger is a pretty big deal.

Osborn also says that London has afforded her so many business opportunities she wouldn't have had back in the US. The tech and creative industries in London are super concentrated, she says, as opposed to in the US, where they're spread mainly between Silicon Valley, Los Angeles, and New York. So many of the companies she wants to talk to exist within a two-block radius of Campus, meaning she can pop over to meet with, say, the Last.fm guys at the drop of a hat.

Being an American in the UK, she also gets invited to a lot of events she otherwise wouldn't have access to. Recently, she sat beside Kate Winslet's family at the London premiere of "Titanic". Perhaps most importantly, London's after-work drinking culture means she also meets a lot of interesting people down at the pub...

Springboard co-founder Jon Bradford said Google reached out to him to offer the space to his accelerator for free. Bradford says the arrangement is working out well. Springboard currently has 11 teams representing eight nationalities in its three-month program, and in the first four weeks it has facilitated 1,343 one-on-one meetings (he was very precise) between 26 entrepreneurs, more than 120 mentors, and potential investors.

The building contains its own ecosystem, Bradford reckons, and provides ample opportunity for a meeting of minds, often on a totally casual basis. Says Bradford, "A lot of it's to do with just sitting down and having smart conversations with smart people."

London has a long way to go to catch up to Silicon Valley (and may never), but, with the help of Campus, it may very well be the next New York – just with slightly crappier weather.