With Yelp, Groupon, Foursquare, and Belly – and that’s just to name a few – the local offers space is getting crowded, but a bootstrapped Brazilian startup has just thrown another app into the mix. Nears, which is today available as an iOS app and will soon come to Android, is a location-based marketplace that lets users find offers nearby, send gifts to friends, and get rewarded at their favorite places.

Founder Eric Willis says he and his 11-person team of Americans and Brazilians built Nears to help people discover things to do in real time and save money while they’re at it. The app is based around four key features: Foursquare-like discovery, loyalty points, deals, and gifts. The team has been testing the app in Brazil under the name SaveLocal.

Willis says Nears is entirely commerce driven. While the app is for consumers, generating repeat business for merchants as key to its success. Unlike Groupon, Nears won’t drive only bargain seekers to establishments for one-off discounts, and unlike Foursquare and Yelp, it isn’t so interested in reviews and daily deals. The emphasis, then, is more on building loyalty for businesses. For example, merchants can offer customers discounts that increase based on how many times they check in.

Nears also comes with its own Wrapp-like gifting platform, which lets you send gifts such as coupons to friends, and you might even be able to claim the odd freebie for yourself. By checking in at a bar and sharing the deal on Facebook or Twitter, for instance, you could get a free drink. Not only should that appeal to the thirsty spendthrift, but it’ll also be a cheap way for merchants to advertise. 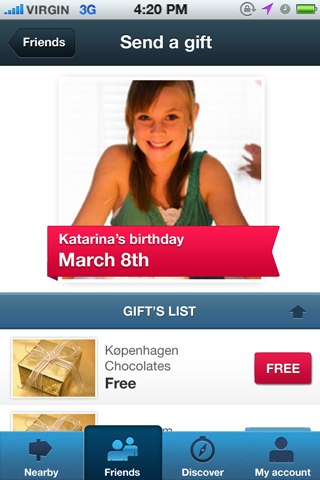 It will be interesting to watch how a Brazilian startup can fare on US soil. With a bubbling economy and a fizzing tech scene, many see the Latin American country as the next great hope. But Willis says some of the Recife-based team will relocate to Silicon Valley. They want to dominate Latin America, so maintaining a base in Brazil remains important to them, but they are looking to add technical talent that has experience scaling applications to millions of concurrent users. “Because Brazil is still very much in an embryonic stage, there are very few people with that type of experience,” says Willis.

Willis is also attracted to the types of investors in the Valley, who can offer support beyond just writing a check. “This is not a knock on Brazil as it is a vibrant and growing community,” says Willis. “But there is no place in the world like Silicon Valley.” And of course, Willis has his eye on the US market’s mature and lucrative mobile market.

Willis has funded the team himself for about a year but will soon look to raise capital in order to grow.