RebelMouse Is the Social Media Aggregator We've All Been Waiting For

I just fell in love.

I'm so in love, that I don't even care that I'm about to write a post about RebelMouse, a site that the rest of the blog world wrote about two days ago. (Note to Gmail: Please route anything from Paul Berry to the Priority Inbox from now on.)

I must have seen forty pitches of companies who promise to make sense of all of your social feeds. I feel like we had at least two a year at each Disrupt.

Are they trying to solve a huge problem? Absolutely. We all have way too many feeds, and anyone with half a life doesn't sit there all day watching them. You miss stuff, and you have no idea if you missed good stuff or just more self-promotional Retweets and Likes.

Do any of them solve it? Absolutely not. Because they all take the approach of taking your feeds and slapping algorithms on it and just giving you another mega feed. Put another way, they take a Silicon Valley approach to a problem the Valley itself created.

RebelMouse takes a very New York approach, which is to say it's rooted in what works about media. So it's not a huge surprise being a media person, this is the one I love.

Paul Berry was the CTO of The Huffington Post, and for those of us who wrestle with sub-par technology products to showcase our words, he's sort of a big deal. He spoke at Lerer Ventures' recent CEO Summit. Erin Griffith was sitting next to me and whispered breathlessly, "He's like a CMS God!"

RebelMouse is his attempt to bring the magic he built for HuffPo to everyone. The good parts, not all that SEO bullshit.

"People would always say to me, 'Help me do this,'" he says. "The answer was always, 'This is really hard, and you have to find someone really good, and I don't really know anybody, because I've hired them all.' Underneath it all was a realization that there was so much work I'd done with Twitter and Facebook integration at Huffington Post. I was in a unique position. I clearly saw how to solve everyone's problem without having to make them programmers."

We're only in step one of RebelMouse now, and it's still by invite only. (Request an invite here. Seriously, do it.) Once you get accepted, this is all you do. You link RebelMouse to your Twitter account and Facebook account and pick your vanity URL. That's it.

Your page is transformed into a gorgeous mirror of your life on social media instantly. It's sorted into "stories," your Tweets are like headlines and the bulk of the "story" is the image. That makes it imminently consumable. It's also not overrun, which is a minor miracle given the insane volume of things I Like and Post and Tweet everyday. It's like my life splashed up on The Verge's homepage. And somehow all of the curated bits are eerily relevant.

My page was the right mix of all things PandoDaily and about 15 percent personal stuff, which is about how I like my public persona to be. That's sort of how my life is. There were not only my favorite stories we published (and I RT'd) from the week, but our two-week old PandoMonthly video. 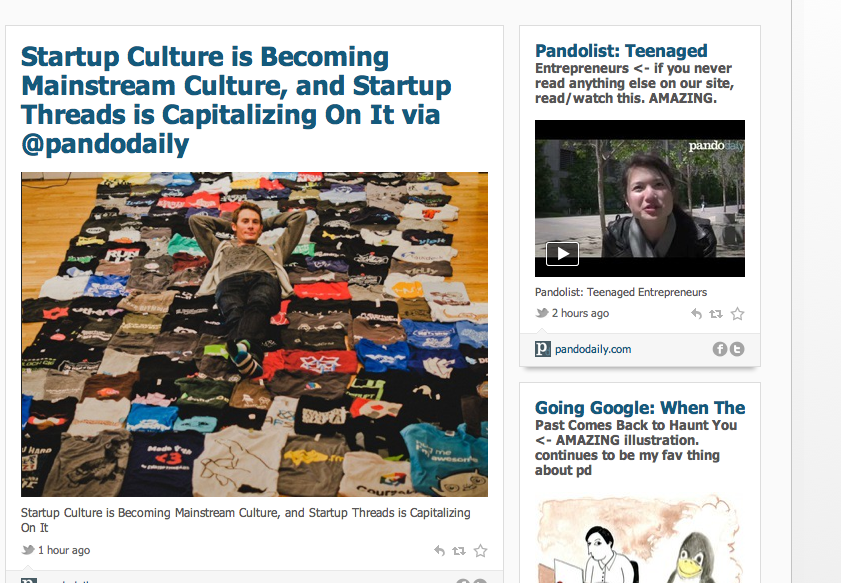 But the personal bits were telling. There was a picture of my son, Eli, and my husband in bed missing me while I was out of town, and another picture of us at Eli's first 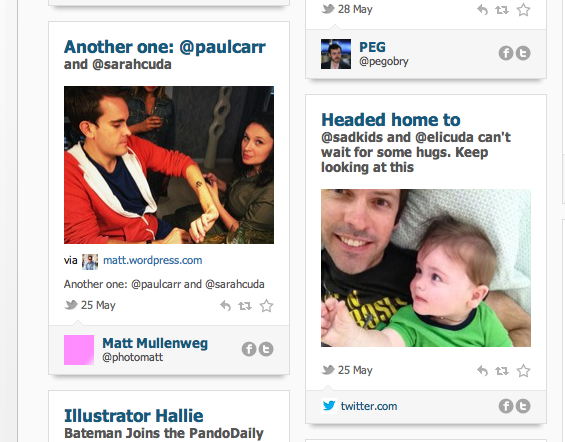 baseball game. There was a RT of a picture Paul Carr snapped of his book at SFO. There was also a picture of Paul and I at Matt Mullenweg's house after PandoMonthly NYC, where he's putting a temporary WordPress tattoo on. I loved that picture when I saw it, but it had flown past on a Twitter river never to be seen again. Yay, you're back!

Ok, so you might think, pictures of your kid, and a milestone from your best friend's life, how hard is that for an algorithm to figure out?

But then it gets weird: There's a RT of a Tweet of someone mocking Eduardo Saverin. All I did was RT it. I added no commentary. I do that all day long. But I do especially loathe 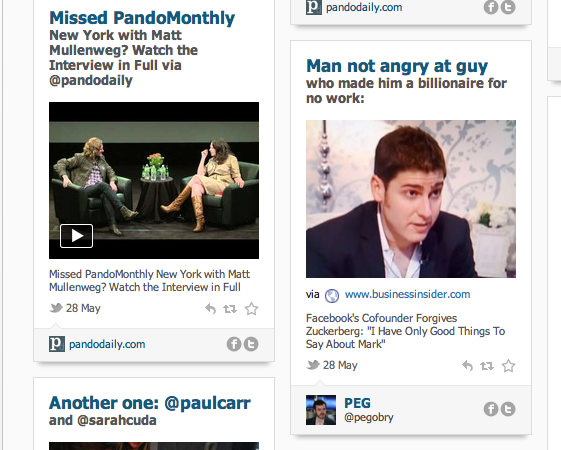 Eduardo Saverin. How did you know, Paul Berry?

Then this one blew my mind: A RT of Kara Swisher on the eve of D10 holding a picture of her son at her first D. I like Kara, but we're not super close. It was an odd pick next to Paul and my husband. And as far as the Web knew, this was just another RT. I didn't add any commentary, as I recall.

But the truth is that was actually a poignant moment, and I actually remember RT'ing it. 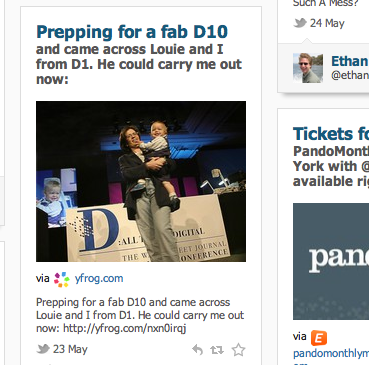 What I was thinking was how Eli always comes to PandoMonthly with me, and how one day, if we succeed, maybe I'll be standing at a tenth anniversary of PandoMonthly with a ten year old Eli. You can't get much more inside my soul than hopes and dreams for my company and my son, as vicariously viewed through a competitor. And I didn't share it with anyone. Paul Berry is some weird CMS God... Get out of my head, Paul Berry!

You can star stories so they stay and drag and drop them around, but I was sort of fascinated with how they picked and sorted them it. I checked back several times a day to see how new things were filtering in, and what they were pushing out. It emphasized how much of a ghost town SarahLacy.com has become -- note that I haven't posted once since I started PandoDaily. I don't have time and if I did, I feel like it would look bad to spend a moment blogging for anything other than the company. Similarly, there are thousands of people who were gung ho on blogging, but lost steam and found social media easier. This is a great way to have your own page again with zero extra work.

Given the phenomenal job RebelMouse did organizing my feed for me, I can't wait until stage two: Making sense of all the feeds coming at me.

Holy shit, a company might actually pull this off.