Five years ago this month, Lynn Jurich and Ed Fenster decided to build an energy company that would defeat fossil fuels. How would they do that? By making solar power not only totally accessible, but so cheap that it wouldn’t make sense to go any other way. Today, as they look back at a solar market that has been rocked by the failure of large-scale American manufacturers, their revolutionary model for distributed solar seems more prescient than ever.

Jurich and Fenster’s idea initially seemed bold beyond economic reason. Their company, Sunrun, would cover the costs of solar arrays for rooftops, and consumers would pay only for the power those panels generated, with potentially large savings.

This was a big idea in 2007, a time when many people thought big generators such as Solyndra, which planned to make solar panels without the expensive polysilicon, would be the future of solar in the US. Five years later, we know that things didn’t turn out so great for Solyndra. In the face of intense competition from Chinese companies, and with sharp drops in prices for natural gas and polysilicon, Solyndra couldn’t compete. Having accepted tens of millions of dollars in financing from the Department of Energy, the poster child for President Obama’s clean energy policy last year filed for bankruptcy.

That failure spooked some consumers and provided grist for critics of solar, and especially for Republicans eager to bash Obama on his supposed clean energy naivety. But for the downstream market – in which solar generation is treated as house-by-house matter rather than one of mass generation – it was a blessing in disguise.

The increased competition in foreign markets – China, in particular, but also Europe, Korea, and Japan – helped drive down the costs for solar panels, making them a commodity and increasing the opportunity for companies such as San Francisco-based Sunrun, which rely on putting solar panels on as many rooftops as possible.

So, after surviving the early wobbles of the financial crisis, the startup has emerged in a healthier-than-expected position five years into its quest to become one of the biggest power companies in the US. So far, the company has raised $145 million of venture capital in four rounds, as well $1 billion in investments from US Bancorp and PG&E Corp, which in return get a cut of Sunrun’s tax credits and monthly revenue. Late last month, Sunrun closed a $60 million funding round led by Madrone Capital Partners.

By most measures, Sunrun’s first five years have been very successful, which is testament to an innovative business model that has re-imagined the utility of solar in an American market that doesn’t easily lend itself to micro generation. 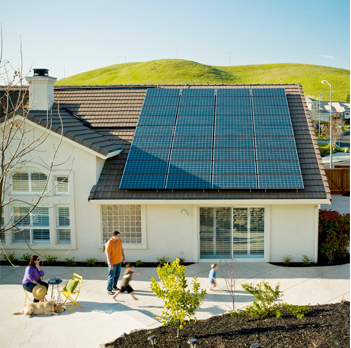 "It's definitely proven victorious in the residential market in the US," says Matt Feinstein, an analyst with Lux Research who covers the energy sector. "They've shown that they can do something really interesting, which is not just capitalize on demand, but create it."

Sunrun says it now installs more than $1.5 million of solar every day in a market that didn’t exist before 2007. Today, it has 20,000 customers in 10 states. But that base didn’t come easy. It took four years to accrue the first 10,000 customers. The next 10,000 came online in the ensuing 11 months, suggesting the company is only at the beginning of a potentially steep upward curve.

“They've basically exceeded all our expectations dramatically,” says Richard Wong of venture capital firm Accel Partners, which invested in Sunrun three years ago. “They had projected at some point getting to 20,000 homes, but I wouldn't have expected that they would do it quite as quickly as they have. That's an important milestone for this company.”

Provided it can keep the capital flowing in, Sunrun is in a strong position to take advantage of a maturing market that is set for rapid escalation. A report from McKinsey & Company, for instance, says that those who think the solar industry has run its course may be surprised. The report, called “Solar power: Darkest before dawn," is especially bullish on the potential of distributed solar. “Solar companies that reduce their costs, develop value propositions to target the needs of particular segments, and strategically navigate the evolving regulatory landscape can position themselves to reap significant rewards in the coming years,” the report says.

Sunrun’s main competitors are SolarCity and Sungevity, but it leads the market in California, a bellwether state for solar, by a wide margin. Sunrun, however, can expect intensified competition from the Google- and Elon Musk-backed SolarCity, which is expected to launch an IPO in the third quarter of 2012, according to CNBC.

“Ultimately solar will be cheaper than the cost to deliver fossil fuels, without subsidies,” says Sunrun co-founder Jurich, who met Fenster at Stanford’s business school after a career in finance. Sunrun, like other solar companies, gets a 30 percent federal tax credit. While Jurich says the company is moving faster along its growth curve than expected, it envisages greater growth as the market matures. The company wants to succeed without the federal subsidy, which means it needs to eliminate 30 percent of the costs in its system.

Jurich points to Germany, where personal solar systems cost 40 percent less than in the US, as an example of how achievable that goal is. There, the market fully understands and embraces personal solar, which means solar companies need to spend less on marketing and customer acquisition, which are Sunrun’s major costs today. Less than half of the company’s actual costs are hardware related, she says.

Perhaps Sunrun’s biggest challenge to overcome in the US is cheap electricity. That has limited its ability to expand beyond the 10 states in which it currently operates: Arizona, California, Colorado, Hawaii, Maryland, Massachusetts, New Jersey, New York, Oregon, and Pennsylvania. It’s unlikely to be able to offer a competitive rate in, say, Tennessee, where the population is dispersed and electricity prices are low. However, Jurich says the company plans to add five states in the next two years, which is more than enough to expand the business.

Sunrun is focused on drilling deeper into those states, rather than expanding across a wide market. Electricity spend in those 15 states amounts to $43 billion a year, she says, which leaves the company plenty of room for revenue growth.

For Sunrun, the next five years will be crucial. The company will concentrate on growing awareness that solar is an affordable option, while continuing to raise millions of dollars to fund rapid expansion, and driving costs down even further, so fossil fuels finally can be put in their place: at the back of the line. The US might be a long way from Germany's solar utopia, but, rooftop by rooftop, it's getting ever closer.