Google has to bear some responsibility for Facebook’s inability to build a presence in China, according to a leading market analyst.

I introduced Shaun Rein here on PandoDaily a couple of days ago. He’s the founder of the China Market Research Group and a veteran watcher of the country’s tech industry, having spent 12 of the last 15 years here. He recently published a book called The End of Cheap China, which he launched in the US with an event hosted by Marc Andreessen (disclosure: a PandoDaily investor) at the Menlo Park offices of venture capital firm Andreessen Horowitz. I met Rein over lunch and asked him about all the major issues in China’s Internet landscape today. When it came to talk of Google and Facebook, he didn’t hold back.

“I don't see how Facebook could succeed in a meaningful way in China,” he says. One of the major reasons is that China’s more reform-minded government officials felt like they got their legs cut off at the knees by Google. Rein is angry at Google because of that.

When in 2010 Google very publicly pulled its search operations out of China in response to “sophisticated cyber attacks," including the infiltration of Gmail accounts of China-connected human rights activists, those officials who greenlighted Google got in trouble. In China’s government, discipline is taken very seriously, and in Chinese society, loss of “face” – which can be roughly understood as a blow to one’s reputation – is just as damaging. The consequences of the Google drama are thus hurting Facebook today.

“Nobody in the Internet field is willing to stick out their head and go to bat for an American Internet player again,” says Rein. “Because it's not worth it for them. They don't want to see their career stunted, like those guys who approved Google originally.”

Google, by the way, has declined my requests to discuss its presence in China.

Facebook faces other problems, too, Rein reckons. He’s not convinced there’s a real market for the company here, because of the strength of homegrown online communities, such as Sina and Tencent’s Weibos, which are microblogging services, and social network RenRen, all of which count registered users in the hundreds of millions. Facebook would also struggle to be profitable, because digital ad spend is only about 3 percent of most marketing budgets in the country, compared with 8 to 12 percent in the US. Then there’s the uncertainty over whether or not the service would be blocked.

“A lot of advertisers would say, 'Do we want to plan a Facebook advertising campaign six to 12 months out?' when there's going to be that underlying fear that it can get blocked at any time, and then their whole campaign goes to hell and then they have to find something else at the last minute.”

Ultimately, Internet media companies such as Facebook, Google, and Yahoo were always going to have a tough time in China anyway, because of the nature of their businesses.

“A lot of people have been saying that China's government is becoming more protectionist,” says Rein. “That's not true. China has always been protectionist. There's always certain sectors, as long as I've been here since the mid-90s, that foreign firms cannot operate in easily. And one of them would be, say, media. Another would be electricity, finance, and the Internet. The Internet is actually the worst, because it's a mix of media, it's a mix of entertainment, it's a mix of culture and everything.”

People often talk about the massive potential waiting to be unlocked in China. Facebook already has 950 million users – imagine if it could tap into the Middle Kingdom’s 500 million Internet users. It’s looking increasingly unlikely, however, that that’s ever going to happen – especially in the wake of tighter regulations recently proposed by the government.

Meanwhile, check out the table below (click through for larger version) to see the full extent of Facebook's challenges in China. Brought to you by William Moss, aka @imagethief. 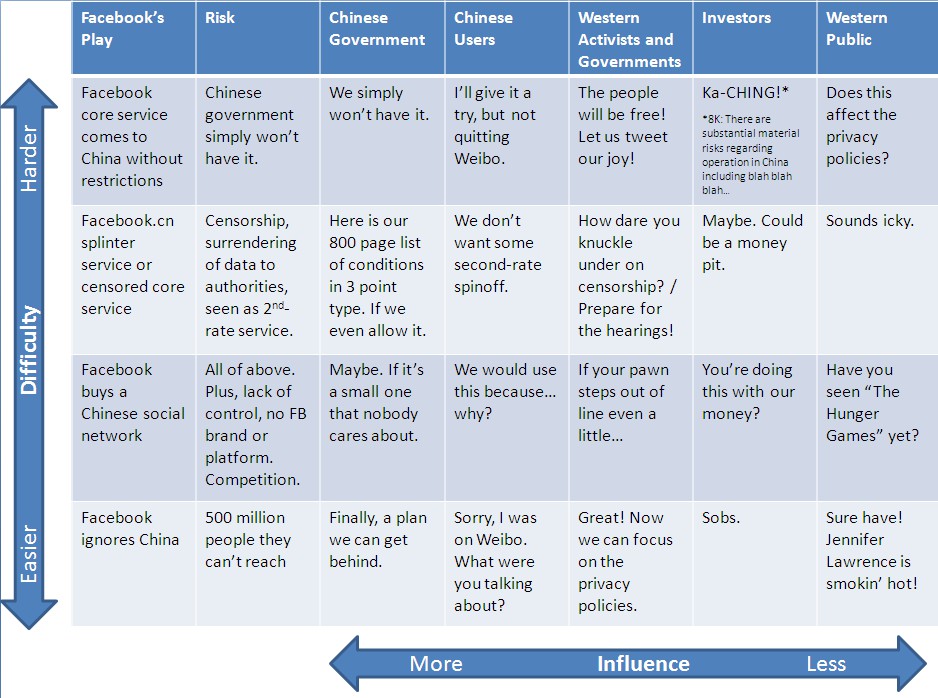