These are torrid times for ecommerce in China. The numbers can be intoxicating. Online retail sales last year were equivalent to the GDP of Vietnam, and by 2015 are projected to rise to $420 billion (Austria’s GDP), according to Barclays Capital. At that time, China will be bringing in 20 percent more than what the US ecommerce market will achieve at the same point. But even as the market swells and swoons, many of the China’s once-promising ecommerce businesses are in serious trouble.

Group-buying site Lashou, a Groupon analogue, is the latest in a growing line of hard-luck stories, having just cancelled plans for a $100 million initial public offering on the NASDAQ. One of the top three group-buying services in the country, out of a list of more than 1,000, Lashou blamed poor market conditions for its IPO withdrawal. It is not alone in its suffering. For example, publicly listed apparels and accessories site Mecox Lane is in free fall, as its falling share price indicates, and online books retailer DangDang is also in decline. Take a look at their stock charts. 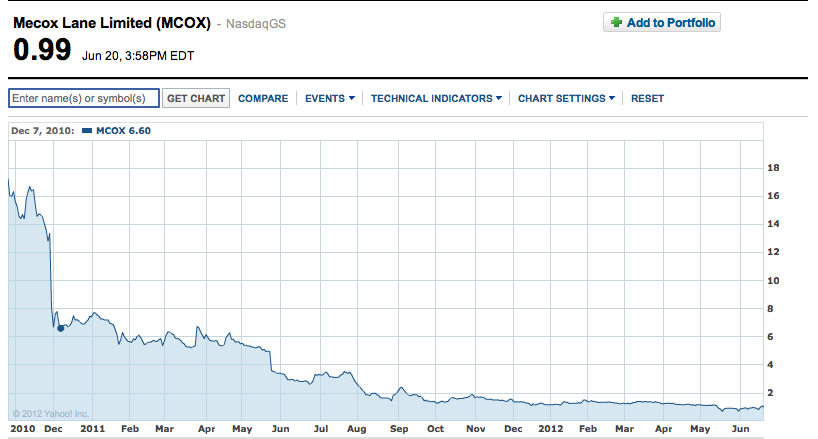 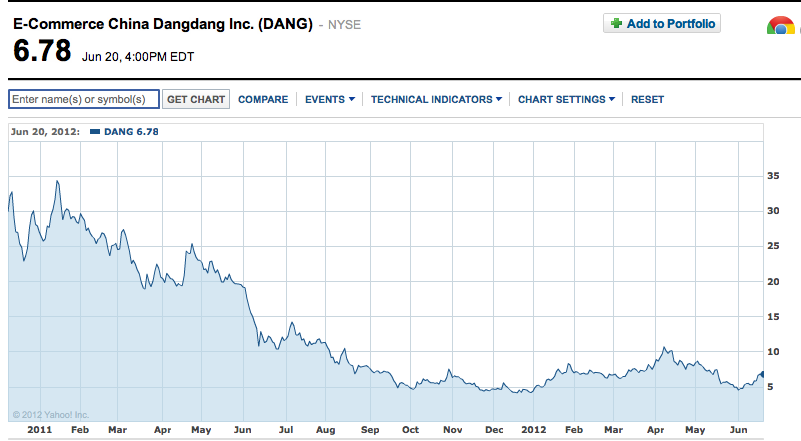 The explanation for those droopy charts? Intense and brutal price wars. Encouraged by investors to spend money on grabbing market share, many ecommerce companies are digging a ditch they can’t climb out of. In a fight for consumers, sites such as 360Buy, Mecox Lane, DangDang, Meituan, RedBaby, Letao, VANCL, and Alibaba’s business-to-consumer site Tmall in the process also have been tearing each other to shreds, shaving margins ever thinner. Tmall, for instance, will spend $15.7 million on incentives this month, promising any customer a $314 rebate on any purchase of the same value or higher.

“What you have is VCs, private equity, and hedge funds investing hundreds of millions of dollars into these companies and saying, ‘For 10 years, basically just get market share. We don’t care about profitability,'” says Shaun Rein, head of the China Market Research Group. “And so that’s destroying the brick-and-mortar set. When you're a clothing store, or a home electronics store, like a Suning or a Gome, and you have to compete against a 360Buy, which doesn't have the same real estate overhead, it’s very hard to compete. So I think you’re going to see some serious bankruptcies in retail in the coming five years, both brick-and-mortar and ecommerce, because at some point it’s not sustainable.”

Tmall’s big June splash is probably meant to undermine competitor 360Buy, currently the country’s second largest online retailer, behind Tmall and its consumer-to-consumer sister site Taobao. The Walmart-backed 360Buy, which also counts Baidu founder Robin Li and Yuri Milner’s Digital Sky Technologies among its investors, is expected to file for IPO in the US later this year, and recently announced plans to go on an acquisition spree in the next six months.

Tmall’s aggressive play is a prime example of the cut-throat nature of China’s ecommerce sector and its “innovate or die” demands. But the service has a distinct advantage over rivals. The site can afford strong-arm tactics not only because it is backed by Alibaba, but also because it’s a platform that doesn’t rely on sales margins for profit. Instead, it charges businesses fees for transactions. Last year, it generated $16 billion in sales, according to BCG. The eBay-like Taobao, on the other hand, doesn’t take a cut of the transactions it facilitates, but instead makes its money from advertising. Next year, it will bring in $716 million in pre-tax earnings.

Life will be much harder for multi-brand competitors that don’t have the benefit of being a platform. Sites such as fashion etailer VANCL, Zappos clone Letao, and books specialist DangDang are competing on price, which means their margins are getting squeezed to zero, which quickly sucks up capital. The upshot, say industry experts, is that China’s ecommerce sector is about to enter a period of serious consolidation.

“It’s basically just a shake out. But that's paved the way for the retailers that survive, as well as the brands, to really make money and get a return on investment in China,” says George Godula, head of Shanghai-based digital advertising consultancy Web2Asia.

Godula says companies that can’t afford to wait out the price wars will have to either establish their own brands, on which they can claim higher margins, or pivot into logistics companies, managing the tricky terrain of the service and delivery chain. “I don't think any of those big players will die, but they will focus on their core strengths, and they will try to make a business out of that,” he says.

On the bright side, says Godula, China’s ecommerce infrastructure is now mature enough for individual consumer brands to start their own online retail operations. That has already happened with Suning, Gome, Haier, and Lenovo – all Chinese electronics brands investing heavily in the space. Such brands are realizing they can make more money by cutting out the mediators. Their moves also echo Adidas’s recent announcement that it will no longer sell its apparel through third-party online retailers in Europe, ostensibly because it is concerned about its premium products being sold in environments beyond the company’s control, but more likely because there is enormous economic gain to be had in going direct to consumers.

At least one prominent Chinese investor says that despite all the bad news about the ecommerce sector, there is reason for optimism. “If you only look at the top line, it’s very risky,” says Allen Zhu, a partner at GSR Ventures. “You need to look at much more than just the revenue.”

Zhu points to some encouraging market metrics. A quarter of all apparel sold in China this year was sold online, he said. In five years, ecommerce will account for 10 percent of all retail sales. Consumer demand for online shopping is soaring, especially in second, third, fourth, and fifth-tier cities, where the brick-and-mortar retail sector is underdeveloped.

Today, China has about 193 million online shoppers, and by 2015, they’ll be spending $1,000 each per year, as much as Americans do today. Certainly, there is gold in them there hills. But for most companies, it’s going to be a hell of a climb to get to it.