First Enswers Will Kill QR Codes, Then It Will Invade Your Living Room

On my last morning in Seoul, I sat at a boardroom table and made a mess of a sugar-coated waffle while Enswers’ executive team tried to explain to me exactly what their media-recognition technology does.

I watched a demo video that showed Enswers’ technology out-performing Shazam at recognizing a Guns ’N Roses song. On another video, I saw how, just by pointing an iPhone at a TV screen, the same technology could recognize what show was playing, send the info to the app, and then start streaming it on the mobile device. On a laptop, CEO Jack Kim showed me how the company’s Imideo plug-in can recognize a screenshot, hunt out the video, and then start playing it in an overlay on the site in a matter of seconds. (Here's a demonstration video from AsiaD.)

And then Kim pulled out a children’s book about two friendly birds, used his iPhone to take a photo of one of the pages, and showed me the almost-instant transcription of the text, which appeared in an app alongside translations from English to Korean. Then the app read the text out loud, all Siri-like.

It was at that point that the penny dropped. “Oh,” I said. “So, do you want to kill QR codes?”

Kim got a big smile on his face, while his two colleagues, Sherman Li and JP Lee, looked at him sideways. After grasping for the word just a bit, Kim said: “Sure.”

But of course, Enswers won’t just be killing QR codes. It will also threaten Shazam. And if it has its way it could become the leading technology provider for the “second screen” industry, providing extra contextual information to accompany any televised content. It already has partnerships with Japanese advertising giant Dentsu and Korean TV station SBS to provide technology that will bring second-screen enhancements to coverage of the 2012 Olympics.

Rather than decide the ways in which the technology should be used, Enswers will open up its API so the technology becomes a platform. It will then leave it up to app developers to find new and inventive ways to add value to media experiences. A simple example the men provided was using the technology to “check in” to an NBA game you happen to be watching on television. Of course, once you’ve done that, you’d be open to receiving a bunch of pop-ups or push notifications throughout the game, offering deals, connecting you with like-minded fans, or just giving interesting extras, such as statistical breakdowns.

The technology will also be built into smart TVs. Enswers has lined up partnerships with two major Korean TV manufacturers to do just that later this year. Kim refused to name names, but the math isn’t that hard: It has to be Samsung and LG. Which of course means it’s only a matter of time before this technology is in your living room.

Enswers is not alone in this space. In Japan, it competes against NTT Data, and IntoNow is already well established on the market. But the company prides itself on being faster and more accurate than the competition. In the long run, its ultimate opposition might come in the form of Google X’s self-teaching recognition engine, which leverages the power of 16,000 computers. 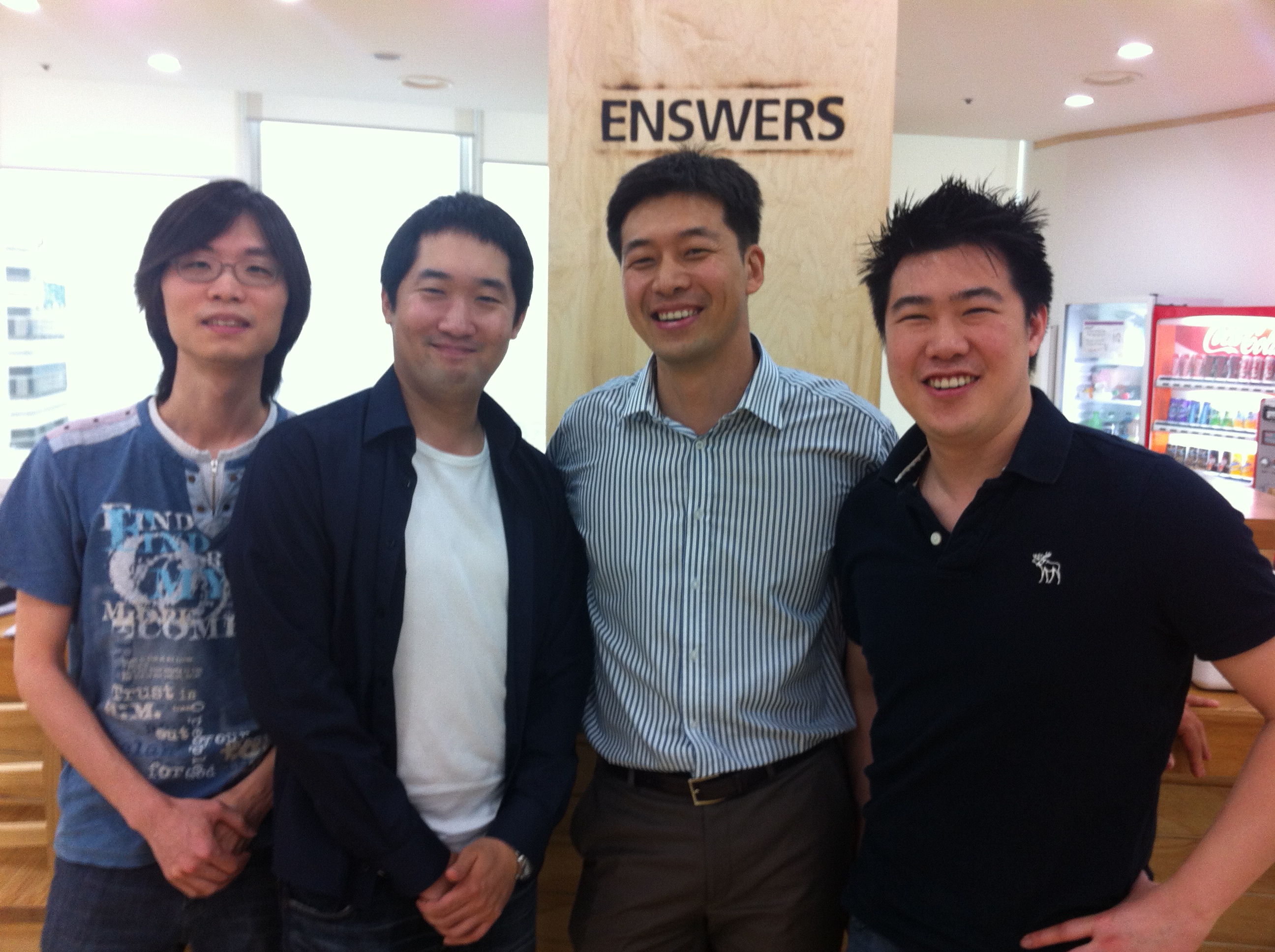 But that’s a concern for another day. In the more immediate future, Enswers is concentrating on expanding to the US. Next month, it is setting up shop in San Francisco. The company’s president, Sherman Li, will head up the office, which will focus on sales and product development. “We’ll be talking to every developer and media owner under the sun,” Li said. The team of five will initially be based in a co-working space.

Founded in 2007, Enswers is already a major success in Korea and Japan. It was one of a handful of prominent recent deals that have excited the startup community. In December, telecommunications giant KT acquired the company for $40 million. Following the sale, Enswers moved into swish new digs on a high floor of the modern downtown Seoul City Tower, with grand views of the city, a large open cafe that doubles as an informal art gallery, and massive fern-type pot plants that pretty the place up. On the whole, the company has been allowed to retain its independence.

Yesterday, I wrote about how traditional Korean culture – which is predicated on hierarchy and obedience of authority – often hinders startup culture, which has opposing demands. That’s not much of a problem here. About a fifth of the 70-strong team is international, there are no official office hours, and staff get together for Monday night poker games. Taking a page out of the Valley playbook, there’s an on-site nap room, and a dart board and foosball table occupy a prominent space in the common area.

Kim learned the hard way that a conventional Korean work environment is not conducive to the type of creative work he needs his developers to be doing. In 2000, he founded a voice-recognition startup that proved to be well ahead of its time. The corporate culture there was very nose-to-the-grindstone. Even though the team worked their asses off, it didn’t work out. After six years of struggle, Kim was forced to close the company. This time, he has built a more relaxed corporate environment – standard dress code is T-shirt and jeans – and gives his engineers more creative freedom. “I don’t want to make people to work by force,” he says.

That failure wasn’t all bad, however. The same underlying technology from that first venture is what powers Enswers today. What happens to it tomorrow is another question. I’m looking forward to finding out.

[The photo above shows, from left to right, CTO Jaehyung Lee, executive vice-president JP Lee, CEO Jack Kim, and president of Enswers America, Sherman Li. I took the photo with my iPhone. I know, it's crappy – but the guys look nice, don't they?]