When China's Netizens Are Angry, They Really Meme It

Anyone with an even passing interest in China's Internet should read the excellent Tea Leaf Nation, a blog by writers in the US and China who distill the best of Chinese social media into very readable daily posts.

Recently, the blog has been curating powerful images and conversations posted to social media in response to a bloody conflict between riot police and protesters in Shifang, a small city in the southwestern province of Sichuan. The protests were against a planned molybdenum copper plant. The photos collected on the site show just how powerful the Twitter-like Sina Weibo has become for China's previously relatively voiceless citizens.

It’s too much to say that Weibo thus functions as a “shadow democracy.” At best, it’s a weak simulacrum shot through with exceptions, deletions, and danger.

But, there is at least the ability to conduct a “digital protest,” or a “shadow protest.” In netizen parlance, it might be called “wei guan,” (围观) or “gathering ’round.” Netizens use the term broadly to call attention to the trivial, but also to the profound.

“Gathering ’round” perfectly captures both the power and the passivity of online protest. On one hand, netizen commenters or re-tweeters are doing nothing more than bearing witness to injustice. And yet, the number of witnesses is itself a projection of power. It sends the message that a large number of Chinese find a behavior, or an outcome, unacceptable. This remains true even if censors move to delete comments after the fact. That is as balanced a view of China's social media as you can hope to get.

The blog has also posted a translation of a recent Weibo post from Chinese Internet celebrity and youth leader Han Han. Wertime noted that Han had previously expressed doubts about online protests, but this time he defended the protesters against overly aggressive police behavior. Western readers who assume that China's online censorship is so rigid as to deny any dissent might also be interested to note Han's tone:

If citizen conduct crossed the line, and then they were held by police and received punishment under the law, I would not have any complaints; but when the police cross the line, using anti-crime weapons against their own citizens, shouldn’t the police have to apologize? We can see from the Weibo tweets sent out by the Shifang government that its words are pedantic, its tone harsh, not apologetic in the slightest. The government official sounds like an emperor offering his people amnesty, even calling out slogans like “determinedly protect the legal rights of the masses, determinedly protect social stability and harmony.” These two phrases are like singing while playing the harmonica–they can’t both be accomplished at once.

One thing I really admire about Tea Leaf Nation, though, is that it knows how to keep things light – as do Chinese netizens. In the face of the disturbing protests, up has sprung a meme in the vein of Pepper-Spray Cop. The Shifang version stars a rotund officer of the law named Liu Bo. He was originally caught in charming pose in the photo displayed at the top of this post. Sina Weibo users soon posted other sightings of the corpulent officer. We include them below, via Tea Leaf Nation, for your simultaneous outrage and enjoyment. 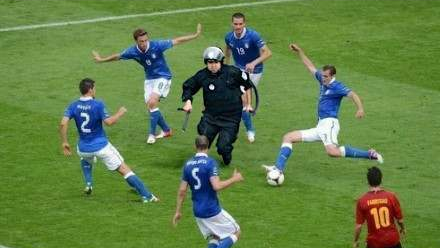 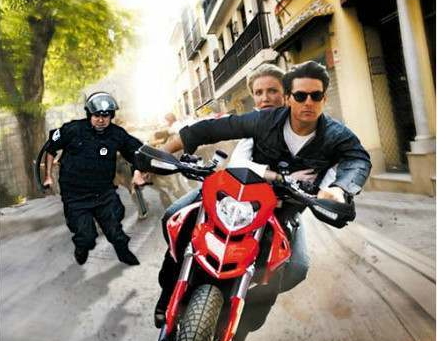 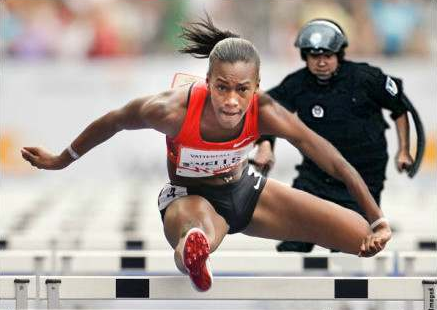 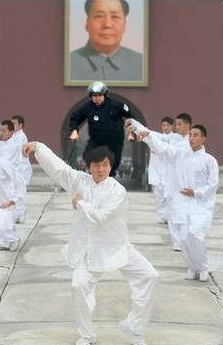 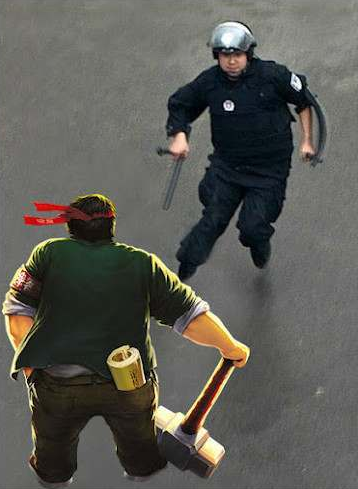 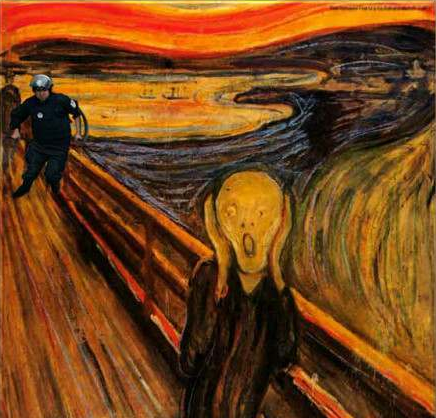