To many casual observers, China in 2005 was anything but calm and organized. But Evan Osnos was not a casual observer. He had just come from Iran, where he reported on the controversial national elections that brought hardline conservative Mahmoud Ahmadinejad to power.

“I was coming from a place that was in disarray," says the New Yorker's China correspondent over a smoothie in an upmarket Beijing juice shop, "and I was coming to China, which at that moment was feeling so muscular and ambitious and optimistic. And orderly. That was the funny comparison.”

Osnos was near the top of my list for people to meet in Beijing, not only because I admire his work and the publication for which he writes, but because he has been covering culture and society in China for the last seven years, a crucial and fascinating period of time in the remarkable story of the Chinese Internet. In that time, China surpassed the US to become home to the largest number of Internet users in the world. More importantly, however, it experienced a series of tremendous Internet-induced seismic shifts that have reshaped its society and complicated its domestic politics.

Few Westerners have been better placed to bear witness to these changes than Osnos, an award-winning reporter who has shares in a Pulitzer with his former colleagues at the Chicago Tribune. As well as regular longform contributions to the magazine, Osnos writes a “Letter From China” blog for the New Yorker. Recently, he has covered how Facebook’s IPO highlighted China’s innovation weaknesses, the vagaries of Chinese technology companies’ government ties, and a story about matchmaking site founder Gong Haiyan, an unlikely Internet entrepreneur.

When I catch up with Osnos on a humid Sunday morning, he’s dressed in khakis, sandals, and a blue check shirt that looks just like what I’m wearing. He’s about the same height as me, has similar light-brown hair, and, like me, he even orders an apple-raspberry smoothie. To people at the other tables, we must look an odd pair. “If only,” I think, “they knew that one of us is a widely admired journalist of international renown who works for a prestigious publication. And that the other dude writes for an American magazine.”

In reality, of course, Osnos is a journalistic heavy-hitter. He has a Harvard pedigree, speaks Chinese fluently, and did eight years with the Tribune before joining the New Yorker as a staff writer in 2008. Before he got to China, he spent three years in the Middle East, which included going into Iraq with the US Marines during the invasion that started the 2003 war. It was, says Osnos, a perspective-changing post.

“Seeing human experience at its most extreme moments affects your way of seeing the world,” Osnos says in a tidy American accent, adding that he would recommend the assignment to any reporter. “Going from there to here is a really amazing experience. I don’t think I would have quite the same understanding of China if I hadn’t seen people at their lowest moments and at their highest moments, which is what Iraq showed me.”

While Osnos has exhibited keen insight on China’s Internet industry, he says he is less focused on the technology side and more interested in how it affects people’s lives. One of the most important changes, he says, is the advent of Sina Weibo, a microblogging service that can best be described as a hybrid between Twitter and Facebook. Tencent quickly copied Sina's initiative, and today the two services each claim 300 million registered users. Among other, more mundane uses, China’s netizens turn to Weibo to share and discuss information that official media sources would otherwise avoid, often because of censorship. Netizens share pictures, which are harder for cyberpolice to block, as a way to broadcast sensitive messages.

American-Chinese ethnographer Tricia Wang, who studies the use of social media in China, recently described the importance of Sina Weibo to Fast Company. “A big turning point in China was the train crash last year [which killed 40 people],” Wang said.

Everyone in China takes the train, and it’s a state-run enterprise. So after this big crash there was essentially a large government cover-up. But people were taking pictures and sending out messages on Weibo up until the last minute when the crash happened, and even though it was censored, the news got out because all these pictures were forwarded through social media.

These days, the trend is to talk about the way the Internet in China is being constrained and compromised by authoritarianism. That's all true, says Osnos, but it comes on top of an essential shift that has triggered and exploited network effects and ushered in the rise of a powerful political force: skepticism.

“Being skeptical in China was always a fairly rare attribute,” says Osnos. In the past, people have been skeptical privately, but few have been willing to speak out and say they don’t believe the official media.

Until recently, isolated voices that resisted the official line would remain isolated. Now, all of a sudden, it has stopped mattering that only a small percentage of a population holds a particular view, says Osnos. The likes of Sina Weibo serve as a gathering point for such a large population that those voices are no longer marginal. “That had a powerful galvanizing effect, and then it multiplies, because if people realize that they’re not alone, then they start to be bolder and it gives them confidence.”

For a new generation of Internet users, the idea that official media is thoroughly unreliable has become part of their world view. That’s a very disorienting discovery, says Osnos, because then they have to find other, more trustworthy information sources. “If you can’t believe what the officials are telling you, then you have to find your own sources of authority,” he says. “That’s one of the reasons why Internet celebrities in China are so much more meaningful than they are in other countries.”

Osnos points to race-car driver and youth leader Han Han as an example. “He was unavailable to a lot of people before, and the Internet has essentially made it possible for him to reach all these people around China who are interested in what he has to say. What they’re interested in, ultimately, is a culture of skepticism. That’s very corrosive.” 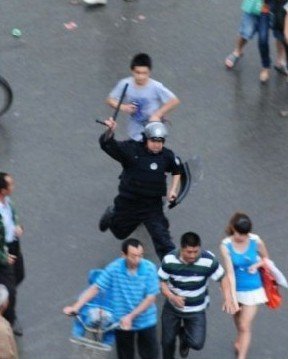 China's version of the Pepper-Spray Cop, from Sina Weibo

The power of social media was again demonstrated two weeks ago during the protests against a planned copper plant in the city of Shifang, in Sichuan province. Photos of police violence against the protesters quickly spread online, and the cops soon became a subject of meme mockery, in much the same way as Pepper-Spray Cop became a symbol of heavy-handed law enforcement during the "Occupy" protests in the US.

“What you’ve got are people who are un-intimidated, they’re willing to put things online that they wouldn’t have done a few years ago, and they’re connecting with each other in very substantive ways,” says Osnos. “That’s meaningful.”

Yes, he concedes, the government could always shut down Sina Weibo. But if it did, it would face serious problems. People would be frantic, because it is a way in which they feel connected to each other, and that’s core to their sense of security, he says. But then there’s the bigger problem, which is that the idea of government intervention – something the authorities would prefer remained in the background – floats into the cognitive space of ordinary Chinese citizens. “That’s the counter-productive element. If you didn’t censor Weibo, there’s all kinds of people who would just be able to live their lives without really thinking that much about censorship. But now they can’t avoid it.”

Osnos reckons that rather than shutting down Weibo, the government will continue its attempts to dial it down. “The Chinese government – without getting too Sun Tzu about it – they know that you don’t always have to use a hammer, that you can choke it instead.” That started with its requirements for real-name registration, which have so far proven largely ineffective, in part because Sina has dragged its feet on complying with the order, protesting that the identity verification system is too difficult to implement. One of the surprises, though, is that many Weibo users have been willing to register their accounts under their actual names, says Osnos.

However, rules from on high are not the government’s only tool of control. Indeed, the authorities often don't even have to do their own dirty work. As independent analyst Bill Bishop has written in an essay about Internet control in China, self-censorship is sometimes effective enough. Writes Bishop:

Chinese internet companies are forced to sign government-mandated ‘self discipline’ pledges, and large firms employ dozens or hundreds of censors who monitor content and remove anything of concern. Failure to comply leads to warnings, fines, shutdowns or worse. The government provides guidance on restricted topics but has structured enough ambiguity into the system so that company censors frequently overcompensate in their efforts to comply.

Despite Google’s high-profile defection and frequent gripes from abroad, Internet companies here are willing to fall into line. They have to. “The government makes it quite clear that if you want to participate in this enormous market at this moment of extraordinary growth, this is the bottom line,” says Osnos. “People don’t really have all that much angst about it at the executive level.”

It’s an interesting non-dilemma, he says, that highlights a nuance of the political and economic culture here that may not be intuitive to Western observers. An American, Osnos suggests, might look at the self-censorship practice and say, “How could you do that?”. “That strikes a Chinese ear as being very naive," he says, "because they say, ‘How could I not? What am I supposed to do? Become a carpenter?’.”

As ever with China and the Internet, the questions are always complicated, and answers seldom satisfying. The role Weibo has to play in determining the future of this country will likely produce the same mixed results.