If ChinaJoy Is Anything to Go By, the US Can Relax For a While Yet

The Atlantic's James Fallows has frequently argued that some Americans are too quick to over-hype China's power. This morning, at the 10th annual ChinaJoy digital entertainment summit, I got a strong sense of what he means.

First, to his main point, which he elucidated in a January blog post:

China has too many things going on, and going wrong, within its own borders to have the time, energy, skill, or ambition for much of an "expansionist" world effort. From the outside, it looks like an unstoppable juggernaut. From inside, especially from the perspective of those trying to run it, it looks like a rambling wreck that narrowly avoids one disaster after another.

The look I got "inside" today was of the country's leading gaming conference, best known for its weekend expo featuring blaring digital displays of the latest online games and the accompanying ridiculously attired young females who happily pose for photos taken by young males who are apparently leaving their bedrooms for the first time. (See photo above.)

That pervy part doesn't happen for another couple of days, though. Instead, today was all about business, and for that reason I was excited to see NetEase CEO William Ding on the agenda, due to deliver a keynote at 10.15am. NetEase is one of China's best and biggest Internet companies, known especially for its games and game distribution. China's bulging bureaucracy, however, had to have its moment in the spotlight first. Events of this scale commonly have to bend knee to their masters.

This year's conference kicked into gear with "keynote" addresses from six government officials. The eager early morning audience was rewarded with electrifying speeches by such luminaries as: the deputy director of the science, technology, and digital publishing department of the General Administration of Press and Publication (GAPP); the vice minister of the Shanghai Municipal People's Government's publicity ministry; the vice minister of the Central Committee of the Communist League's publicity ministry; and two other suits whose titles I can't even begin to decipher.

By arriving a little late, I managed to miss all but the last one: Mr Sun Shoushan, deputy administrator of GAPP. I needn't have worried. Sun shone brightly, surpassing his allotted time by a full 30 minutes in delivering a rousing sermon that exhorted the industry to develop games that play on traditional and historical Chinese themes. He also stressed that the online game industry should focus on the quality of its content. Never have more inspirational words been spoken by a deputy administrator. 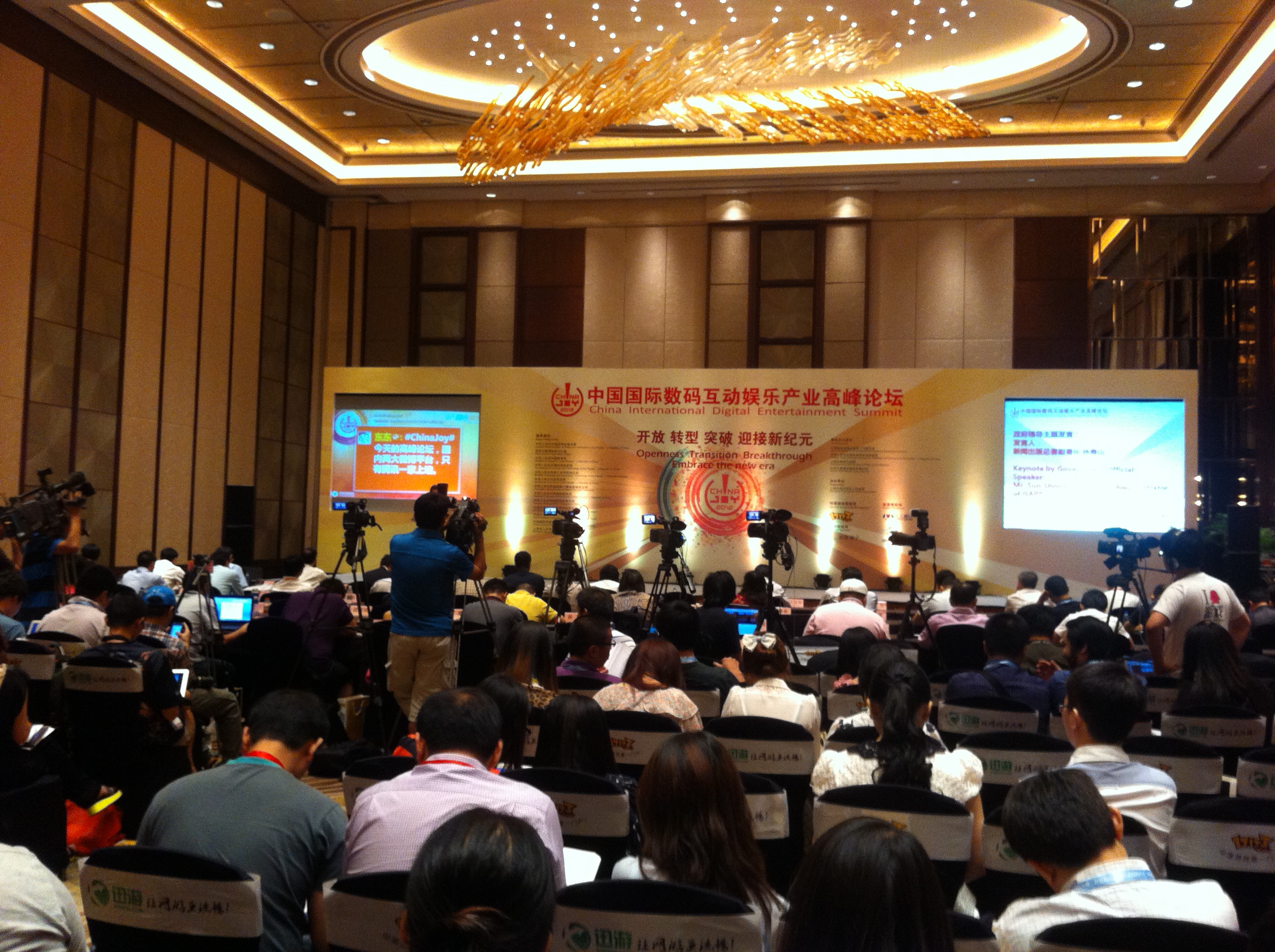 A government official unleashes excitement in a ChinaJoy conference hall

Incomprehensibly, the attendees somehow seemed a little less than electrified. Many played on their phones. Others chatted quietly to each other, ignoring what was happening on stage. A fair number just slept. And then others zipped about from seat to seat handing out business cards to people they had never met and will probably never meet again. One girl carrying a backpack and dressed in a black-and-white striped summer dress gave me her card. I can report that she is a senior account manager for a company that specializes in game localization and translation. I'm not sure I would recommend the company's translation services, though. The English side of her card had the word "Address" printed twice, one right next to the other.

William Ding eventually made it to the stage half an hour later than scheduled. He rushed through a 10-minute presentation, said nothing newsworthy, and instead indulged in some self-praise. NetEase, he said, was willing to try its hand at "indigenous innovation" – meaning it had made some games with strong Chinese themes – and that even though the online gaming sector's growth was slowing nationally, his company was seeing healthy growth.

"As long as you can stand the loneliness, then you can embrace prosperity," Ding said.

Like the government official before him, Ding delivered the bulk of his speech with his head down, reading from his notes.

Chi was followed by speakers from Taomee and Blizzard, both of whom succeeded in discussing nothing but the inherent true awesomeness of their own companies. Then, just when a visiting official from Japan was starting in on his speech – offering an international perspective on gaming – I decided it was time for lunch. 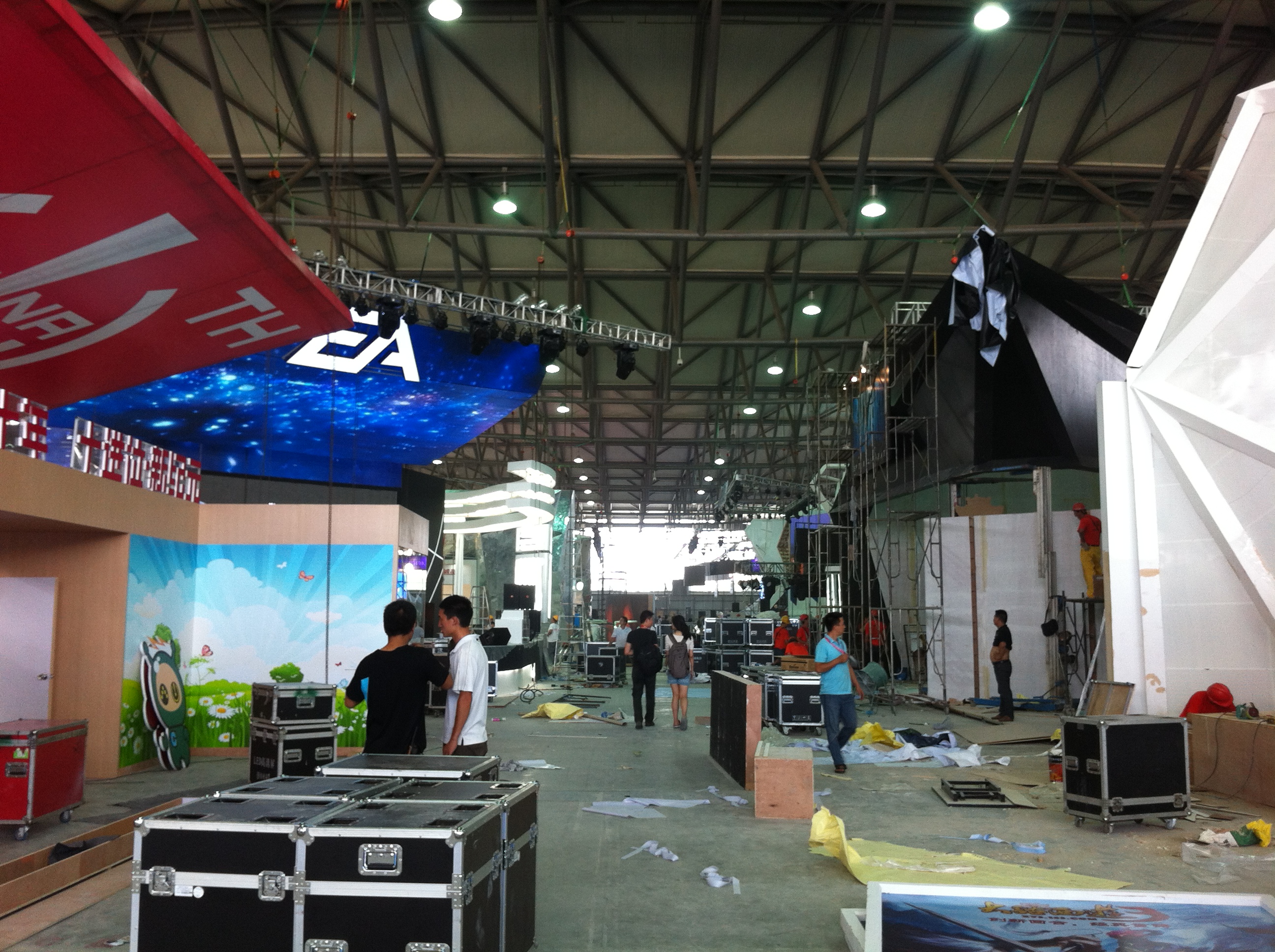 Construction workers build a temporary shelter for the chronically under-dressed

Before leaving, I took an unauthorized tour of the expo hall as workers set up the many elaborate temporary structures that will soon house the country's hottest game companies and girls. It looked like a definite hard-hat zone, but non-construction worker types – including me – wandered the hall freely. The air was filled with saw dust and the floor littered with debris. But it was still more riveting than whatever was going on in the grand ballroom.

I left the conference thinking that a lot of my reporting here has been about the most exciting developments in China's Internet industry. What I haven't stressed so much is that it is still a long way behind the US on many fronts. So lest you get too excited, or fearful, about China's imminent rise in tech, remember Fallows' words: While from the outside it may look like an unstoppable giant, from the inside it often seems like little more than a rambling wreck.

By the weekend, that expo hall will look shiny and sexy. Today, where the business was happening, the conference looked anything but.