Once Touted as IPO Hero, China's 360buy Hits the Doldrums

Just 10 months ago, Walmart-backed 360buy appeared to be preparing for one of the largest-ever Internet IPOs. Now, as it burns through cash on razor-thin margins and has seen the departure of a key staffer, it seems destined to be one of the biggest disappointments in a string of underwhelming Chinese Internet business showings in the last year. The company’s weak performance is likely to further undermine investor confidence in Chinese companies that are publicly listed or have IPO aspirations. (Mind you, to be fair, even the giants in the US aren't doing so hot right now. The global markets are firmly in frown mode.)

The ecommerce giant – second only to Alibaba’s Tmall in China’s business-to-consumer online retail sector – has apparently shelved its much-hyped plans for an IPO and instead is seeking a Series D funding round that will likely see its valuation drop compared to its previous round, according to various sources. Some reports pegged 360buy’s previous valuation at $10 billion, although several sources close to the company have suggested that a valuation of $7 billion is closer to the mark. Update: A source close to 360buy has confirmed that the $10 billion is outright wrong, and that the actual valuation was $6.4 billion.

One well-placed source has suggested that the company is now asking for a valuation at a 10 percent discount compared to its previous round, which came in April last year and raised $1.5 billion from Russia’s Digital Sky Technologies and Tiger Fund, among others. That may be optimistic given the current state of the market, internal management issues, multiple self-imposed handicaps, and the struggles in China’s price-war-battered ecommerce sector. But even if the company does meet that goal, it will be a significant backstep from the excitement that had surrounded its IPO potential earlier in the year.

As recently as last September, Reuters reported that the company planned to raise $4 billion to $5 billion in an IPO tentatively scheduled for the first half of 2012. In June, 360buy’s founder and CEO Richard Liu told the Financial Times in his first interview with foreign media that the company would do a lot of acquisitions in the second half of 2012, further fuelling IPO speculation. In the same interview, however, he said the company was in no hurry to list. “We have enough cash until 2015,” he told the newspaper, claiming that the company had nearly $1 billion in cash at the end of 2011.

Liu’s comments came just a week after the China Daily reported that the company had hired former Merrill Lynch Asia-Pacific board member Kate Yingchun Kui as its vice-president in order to help prepare for an IPO that would probably be filed in the US.

Just a month later, however, 360buy was denying plans it would go for an IPO before 2013. Even more recently, the company’s chief operating officer, Shen Haoyu, who had joined from Baidu, suddenly left the company. Some reports said he resigned. Baidu’s founder Robin Li is a key investor in 360buy.

According to leading Chinese business magazine Caixin, in May 360buy met with bankers who estimated its value at $5 billion. That represented a steep drop from the reported $7 billion valuation that came from its third round of fundraising, attributable to the company falling well short of its 2011 commitment to investors, a private equity source told Caixin. Despite that, 360buy was less than happy with the valuation, which was significantly lower than it had hoped for.

(I have reached out to 360buy for comment, but have yet to hear back. It the company responds, I will update the story accordingly.)

360buy – also known in China as Jingdong Mall – has a remarkable growth story, having started in 2004, grown to more than 25 million registered users, and recording annual revenue growth rates of more than 200 percent. In 2009, it had net revenue of $421 million, which jumped to $3.3 billion last year. The company expects revenue to more than double this year and rise almost tenfold by 2015, according to the Financial Times.

But it is sustaining heavy losses. Its net losses more than doubled last year to $157 million, and the company does not expect to turn a profit until 2015, according to the FT. Last year, it recorded a gross profit margin of 5.5 percent – very low by US ecommerce standards, but not unusual in hyper-competitive China, where online retailers compete mainly on price. Its core electronics business sees about a 5 percent margin, which many analysts believe is too low to sustain a business in the long-term.

At 5 percent, the company’s operating margin is certain to be negative, says Michael Clendenin, an analyst at Shanghai-based RedTech Advisors. “It’s quite a lousy business to be in in the near term.” In the US, Amazon’s margin hovers at around 25 percent, says Clendenin. 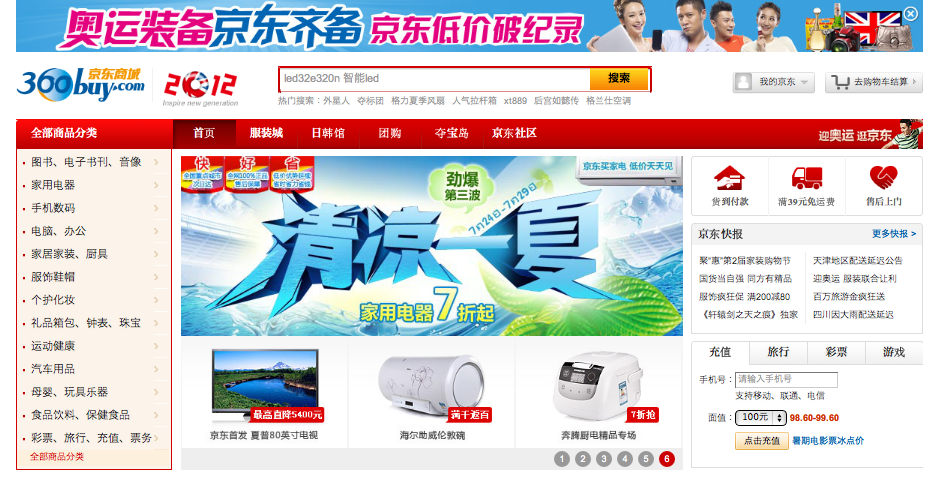 However, Clendenin doesn’t believe 360buy will go away anytime soon. With backing from Walmart, DST, and Robin Li, among others, as well as its large market share in terms of traffic, “it’s a situation where they’re almost too big to fail.”

In the context of the intense price wars China has seen over the last 18 months and the country's grim IPO prospects, it’s not surprising that 360buy would be forced to accept a "down" financing round in terms of valuation. “It would be perhaps more surprising if they didn’t take a down round, because that would show the foolishness among private investors,” says Clendenin.

When the company got its early funding, the market was a lot more optimistic for the ecommerce environment, whereas now investors are more realistic about the challenges ahead. Consumers are not loyal to brands in China right now, Clendenin says. They are only loyal to price, which means 360buy will have to continue to burn through cash to remain competitive against the likes of Tmall – which enjoys the benefits of being the No. 1 player, the deep pockets of parent company Alibaba, and being a pure platform play – and traditional electronics retailers such as Suning and Gome, both of which have strong online presences.

360buy faces other challenges, many of which have been self-imposed, perhaps as a result of over-reaching and over-optimism. Not only has it set itself up as a principle retailer – meaning it holds on to inventory that it sells – but it also serves third-parties offline by selling merchandise direct from its warehouses. So, while it has recently been trying to ramp up the platform side of its business – serving as a marketplace for third party brands – it has also been acting as a distributor. Adding a further layer of complication to its business, the company recently announced that it will send a fleet of delivery trucks on the streets as early as August to take care of the “last mile” of distribution.

Some analysts believe the company has grown too big too quickly. There is a real need for ecommerce in China, which lacks the basic underlying retail infrastructure seen in the US, but the fight for market share in the overcrowded sector has turned into a war of attrition. Despite its size and its deep-pocketed backers, not even 360buy is immune to that.

Until recently, Chinese companies have believed that if they grow fast, they can go public. For a while, that seemed to be true for 360buy as it eyed up a blockbuster IPO. What the company has experienced in just the last few months, however, has changed the landscape. If nothing else, the story of 360buy is a crashing reality check.

[Image from Eguan.cn via TechInAsia.com]