China Recap: A Glimpse at How the Internet is Reshaping the Middle Kingdom

As I wrote yesterday, China’s Internet industry is at a fascinating juncture, emerging from the shadows of its copycat past and catapulting itself into a mobile future, one in which it will likely innovate in parallel alongside the best from Silicon Valley.

Looking back on two months of reporting from China, I can see that I was fortunate to get even just a small glimpse into a market in transition. Two months isn’t long enough to get under the skin of an entire country, but by talking to smart people working within China and profiling some of its most interesting Internet companies, I was able to get a strong sense of the challenges and opportunities that lie before the country. Here are the highlights of my two months there.

One of the most important features of the Chinese Internet industry’s current landscape is the dire state of its IPO market. As AdChina can attest, the combined impact of Facebook’s painful IPO, a series of accounting scandals related to Chinese companies listed on US markets, and some underwhelming showings by Chinese companies that have recently gone public in the US, has effectively shut the door on the public option in the near future. A silver lining, however, is that investors are now optimistic that the mergers and acquisitions market is heating up.

Another major theme of my reporting in China was just how brutal its ecommerce sector is. Thanks to price wars and an at-all-costs battle for market share, the sector is bracing for painful consolidation that will leave only a few really big players standing.

One company that will be particularly important to watch over the next 12 months is the Walmart-backed 360buy, which also boasts big-dollar investments from Russia’s Digital Sky Technologies and Baidu founder Robin Li. The fast-growing and ambitious 360buy is engaged in a slug-fest with Alibaba’s Tmall, and it has had to back off from a high-profile IPO that was believed to have been on the cards for this year. 360buy’s supporters swear that it has enough cash in the bank to not have to accept a “down” round of financing – its Series C valued it at $6.4 billion – but there are plenty of critics lining up to say that it will struggle to survive on its slender margins and high operating expenses.

Of the more positive trends in China’s Internet industry, I think one of the most overlooked is that a lack of developed infrastructure and technological legacy allows today’s startups to leapfrog steps in the evolution of business that in the US were drawn out over many years. Perhaps the most important leap is to be found in the shift from desktop-based Internet to mobile Internet. Many Chinese Internet users – as well as future Internet users – have never had access to a desktop or laptop computer, and soon smartphones will be in the hands of even the country's rural poor. That offers a tremendous opportunity for mobile-native startups such as karaoke app maker Changba to capitalize on the largest and most accessible Internet market the world has ever seen.

In Tencent’s Weixin and South Korea’s KakaoTalk, we can already see a vision of the social-mobile future being proffered by the East. After failing to find anyone in China who had something bad to say about Weixin, I wrote a post in which I argued that Asia might once again show the way for the future of social networks, just as it did with the likes of SayClub and Cyworld out of South Korea.

Certainly, Weixin – the English-language version of which is called WeChat – presents a golden opportunity for Tencent to expand its power beyond China’s borders, which is something I wrote about just a few days ago.

The Weixin story also comes at a time when China’s ecosystem has developed to an extent that it can grow and nurture its own entrepreneurs, without having to rely so heavily on experience or education in the US. 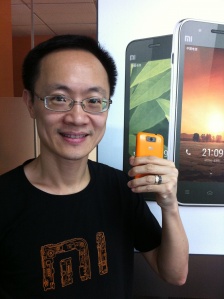 To me, the biggest startup story in China right now is Xiaomi, an ambitious effort at melding hardware, software, and Internet in the Apple mould. I spend two hours with co-founder and president Bin Lin and wrote a 3,000-word profile of the company as it prepared to launch its second handset model, due for August 16. In just two years since it formed as a company, Xiaomi has sold 3 million of its mid-priced, high-spec smartphones and looks certain to be a strong competitor for Apple in the years ahead.

Almost as exciting – at least in terms of sheer numbers and speed of growth – was the much smaller Changba, maker of a social karaoke app that is believed to have accrued 10 million users in just two months. In Beijing, I pulled the CEO and co-founder out of his 15-person office and got the low-down on the app, including a quick demonstration on how it works.

Other encounters with Chinese Internet companies that warrant a mention include: the founder of a Craigslist-like classifieds site who says he can’t understand why Craigslist would clamp down on third parties that build on top of its data; Baihe, one of China’s most popular matchmaking services, which has seen registrations and trust levels spike since it introduced real-name registration; and LightInTheBox, a globally facing ecommerce company that has reinvented part of the manufacturing process so it can offer tailored wedding dresses for its customers.

I also popped into Baidu’s Beijing headquarters, where the general manager for mobile and cloud computing told me that the company’s mobile strategy is actually a cloud strategy, and the head of organic search said that Google hasn’t been innovating much in search of late. Later, I pointed out that, in light of the arrests of three employees who accepted money to delete posts on its forums service, Baidu still faces trust issues.

This doesn’t really fit here, but I had a hell of an interesting chat with Marc van der Chijs, the Dutch co-founder of online video site Tudou, who described how weird it felt to see his company merge with its biggest rival.

As much as we’re all suckers for the tech business, no story about China’s Internet would be complete without considering the socio-cultural elements at play within the country.

One approach I took in coming to grips with how China’s Internet is framed by cultural forces was simply talking to people. I’m an admirer of the New Yorker’s China correspondent, Evan Osnos, so I took the chance to corner him in Beijing and rack his brains about the impact of Sina Weibo. His conclusion? Everyone underestimated how powerful it would be.

In Shanghai, I interviewed another American reporter, Marketplace’s Rob Schmitz, about labor conditions for workers in China’s tech factories, and how fabulist thespian Mike Daisey – whose lies  Schmitz exposed in a memorable episode of NPR’s This American Life – distorted reality in service of his own ego.

I also wrote the first in-depth profile of Bill Bishop, a China Internet watcher and news maven who exerts tremendous influence on the Western media armed only with a Twitter account and an email newsletter. It was Bishop who told me, right at the start of my trip, that proposed new rules for China’s Internet will make Facebook’s hopes of entry into the market even more remote. 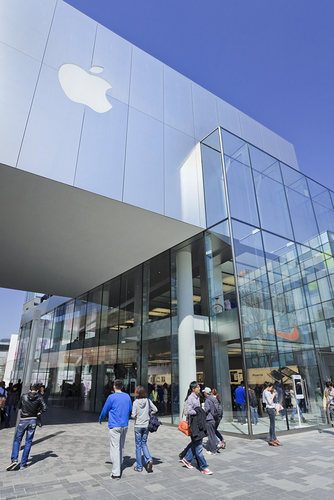 Apple is underperforming in China, according to one analyst I spoke to

Meanwhile, Shaun Rein, CEO of the China Market Research Group, told me that Facebook can thank Google – which royally pissed off the government – for its bleak China prospects. Rein also said that Apple is under-performing in China.

Perhaps my favorite cultural story to come out of my time in China resulted from an interview I had with Sam Flemming, the CEO of CIC Data, a social media monitoring firm based in Shanghai. Flemming laid out some surprising truths about China’s netizens, including that they’ve been doing group-buying since well before Groupon was born, and that gangs of Internet volunteers translate entire episodes of American TV shows and have them uploaded with full subtitles, complete with contextual explanations, within 24 hours of their original air times.

Finally, of all the posts I wrote that speak to the current state of China’s Internet business and its culture, there is probably none more illustrative than the piece about how much of an effect China’s Internet has had on the lives of everyday Chinese citizens in the last five years. The changes have been momentous, historically significant, and promise to be long-lasting.

Perhaps more than anywhere else in the world, the Internet has helped – and continues to help – reshape China’s social, political, cultural, and economic landscapes. And that's why China is, for now, the world's most interesting Internet story.