A Bold Step for the Future of Magazines? A Review of Next Issue for iPad

Presumably because I bagged it at the time it launched for Android tablets back in April, I have been given a test run with Next Issue for iPad. Next Issue offers magazines from five of the biggest publishers – Conde Nast, Hearst, Meredith, News Corp, and Time Inc – in one app for a set monthly fee.

I’ve twice staked out my position on the future of magazines – that they should unbundle their content for the Web, and that the stories should be distributed via a socially integrated platform – so much of what I’m about to say will be of little surprise to many readers. And if you’re tired of me hammering on about magazines, now would be a good time to take your leave. But this review provides an opportunity to examine how publishers are responding to the tablet era with good intentions but execution that ultimately leaves readers wanting.

I’ve now spent a few days with Next Issue for iPad, thumbing my through copies of Vanity Fair, GQ, the New Yorker, Vogue, and Wired. Here’s what I found, and what I think.

Title selection I like the way Next Issue allows you to build a personalized “book shelf” for magazines, allowing you to pick which of the magazines to store on display on the app’s home screen. It’s elegant, easy, and the layout of the covers of my favorite magazines looks great. Similarly, it’s easy to flick through back issues for each magazine.

Multimedia Whether it’s a video of Kate Upton flouncing around in a bikini (GQ) Alec Baldwin soundbites from 30 Rock (Vanity Fair), or poetry readings in the New Yorker, Next Issue effectively exploits the digital platform to add multimedia content that is both interesting and useful.

Buffet Offering an all-you-can-eat price for magazine content is definitely worth a shot. Micropayments are yet to take off in the West – although China long ago nailed the form with online games – and paywalls are a dead end. But one monthly or annual payment that unlocks a wealth of great content? That’s doable.

Cooperation It’s great that the major magazine publishers are working together to create a platform for their products. Publishing’s digital ecosystem is already too fragmented and one app to rule them all is better than an app for every imprint, or every magazine. It might be preferable to have an independent third party – such as Apple, Facebook, or something like Spotify – providing the platform, but credit has to be given the industry for jumping into the tablet space (relatively) early. Plus, in the absence of an independent third party, it at least makes sense for the platform ownership to be shared by a group of rivals.

Content portability Even though by paying my monthly fee I effectively “own” the content, I can only read it in the Next Issue app. Even if I’m particularly interested in a story, I can’t break it away from the rest of the magazine and send it to my iPhone or my laptop. Much of the content – I’m looking at you, GQ – you can’t even tweet or share to Facebook. And when the sharing functions do exist, they vary from publication to publication. Next Issue should implement a universal sharing standard that works across the platform, regardless of whether or not each magazine has its own approach to sharing. In its defense, Next Issue’s notes for reviewers say that more personalization features are coming and “We want you to be able to share your experience with family and friends”. So there is hope.

Reading experience In the review notes, Next Issue says that “All the magazines are custom-designed and optimized for tablets, so you don’t have to worry about readability or stretched images, and you don’t have to pinch and zoom to read.” Actually, the magazines are not so much custom-designed as they are retrofitted for the tablet experience. And avoiding stretched images and the need to pinch-zoom is an embarrassingly low bar to set. 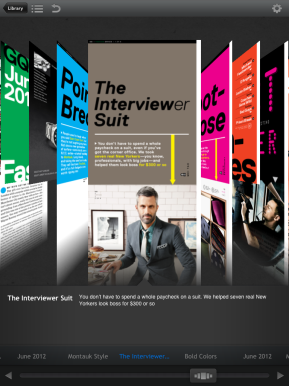 In reality, these magazines are still very clearly designed for paper, even if multimedia add-ons are smartly integrated into existing content. This, I think, is the biggest problem with Next Issue. The magazines are designed for a completely different reading environment – one in which content is necessarily fitted into the limitations of a paper page. Those templates have merely been ported into a digital space, tweaked to fit the iPad’s dimensions, and then been declared “custom-designed”. Really, they are nothing more than glorified PDFs, which is great for Adobe, easy for publishers, and crappy for readers.

This failing is most evident when scrolling through pages in the magazines. Rather than one seamless stream of text or pictures, content is chopped up into page-sized bites, so scrolling through a story can be jarring and jolty.

Publishers may protest that design is crucial to the magazine reading experience, and that the holistic layout is often as important as the individual elements. Magazine reading is an emotional experience, and the beautiful spreads exploit and serve that need. I get that. Before joining PandoDaily, I edited and wrote for magazines for eight years, during which time I had countless discussions with designers about how best to draw readers into stories.

In that case, however, publishers need to recognize that the design requirements for tablets are completely different from those for paper. (No one has made this point more persuasively than designer-writer Craig Mod.) For a longform magazine story distributed on a tablet, there should be no such thing as a page. Most of the time, simple text and some pictures around it will do. Such a minimalist approach provides a reading experience that can be beautiful and light. And you can certainly integrate video and audio and links into that without uglifying the experience.

Meanwhile, digital “pages” might make sense for slideshows or... Actually, it’s really difficult to think of any scenarios in which the page mentality makes sense for a digital platform. Which just goes to show that customized design for tablets requires a fundamental rethink and not just a “click to export to tablet” hack.

No retina support That Next Issue would launch for iPad without supporting retina display is bizarre. For an industry so intent on preserving the high-gloss beauty of its content design, the lack of retina support seems a glaring oversight. Next Issue promises “Higher resolution displays will be displayed over time”. Sorry, but “over time” is not soon enough. That sounds a bit harsh, but if I’m paying $180 a year to subscribe, it’s fair to demand production quality that meets the device’s baseline standards right from the start. I’m sure the objection at this point will be that bumping the mags up to retina quality will make the files way too big. That, then, is a design challenge. Again, tablets have different needs than paper. Treat them with the respect they deserve.

Price That $180 figure – that’s how much it costs to subscribe to the “premium” access plan, which is what you need if you want to get the weekly titles. If you pay $10 a month – $120 annually – for the “basic” plan, you get access only to monthly titles. When you consider the price of subscription to the individual digital versions, that basic price seems reasonable. People magazine, for instance, costs $110 a year, and the New Yorker costs $60. But if you’re like me and want to subscribe to the premium option for just one magazine – the New Yorker – the economic incentive disappears. The cost of the basic plan plus the New Yorker’s separate app is exactly $180.

I’m undecided on this one, though. It might be that Next Issue has got the price just right. If I did ultimately decide to subscribe to Next Issue, I’d probably pay the extra $60 to get the premium plan purely on the logic that I’d want to have the New Yorker in the same place as my other magazines, and that it would give me the option to check out another of the weekly titles from time to time.

Memory hogging Next Issue lets you delete issues once you have read them, which is useful when it comes to saving space on your iPad. But it also highlights one of the app’s problems: these magazines are large files and they hog memory. That’s probably not a sustainable approach to the future of magazine distribution. Another design problem.

Why I'm not going to buy a Next Issue subscription

Believe it or not, I applaud Next Issue for taking an important step towards the future of magazine journalism, and I look forward to seeing how the platform evolves. It is early days, and I’m sure Next Issue will get better. But the reason I’m not going to sign up is that I don’t need it. I get more than enough high-quality journalism for iPad from many of the same publications, for free and with more flexibility, thanks to Longform and Instapaper. I find that content not because it is presented in bundles and distributed via a virtual newsstand, but because people link to it on Twitter, or Facebook, or blogs, or through email, or through curation services such as Longreads and NextDraft.

Longform and Instapaper provide stripped-back reading experiences. First they take me to the publisher’s Web site, so the publisher benefits from the page view and gets to show me its advertising. But then I get to use the “read mode”, which gives me just the text and pictures. It’s light, easy, and highly portable – I can share the content easily, or copy and paste the pieces I’m most interested in. I don’t have to wade through content that is irrelevant to me. I can archive stories once I’ve finished reading them, and I don’t have to download a heavy file every time I want to read.

It’s a shame that so far publishers haven’t found a way to generate more revenue from the improved distribution their content enjoys thanks to the likes of Longform and Instapaper. But it’s also their failing that they have allowed outsiders to develop and control such a powerful and attractive mode of distribution and discovery. These models have been out long enough for publishers to understand their power and the threat they pose to the old mindset of bundling content. As Steve Jobs once said, “If you don’t cannibalize yourself, someone else will.”

What holds them back is likely a reluctance to acknowledge that the legacy model of inserting ads into bundled content doesn’t make sense on digital platforms. That reluctance could prove fatal, and, sadly, Next Issue isn’t going to prevent injury. Instead, publishers should recognize their strengths – that they produce, commission, edit, endorse, curate, and design the best and most trusted journalism in the world – and build on them for the new paradigm. They might not yet know how to monetize that new paradigm, but they should be leading the charge in figuring out how to do so. (Tomorrow, I’ll suggest some ideas they can try.) Longform’s co-founder Aaron Lammer once said to me that publishers need to “solve problems that readers have, and not just problems that magazines have.” Every publishing executive should print that phrase on a piece of paper and stick it to their monitor.

With Next Issue, publishers have shown an encouraging willingness to work together, and they clearly recognize the need to do something. But so far their something is not nearly enough.