While Twitter continues to piss off developers and add to the confusion around its API terms of use, some developers are pressing on with social readers in an attempt to improve the tweet-reading experience. A couple of weeks ago, I covered Slices, which lets users customize their tweet streams. And now, from Russia, comes a competitor: Relevance.

While Slices is focused squarely on Twitter, Relevance also grabs feeds from Facebook. It then relies on a series of algorithms to sort content according to what is most relevant to you, and how much time you have to read it.

To automatically sort content, Relevance analyzes your social graph, the characteristics of each message in your social streams, and the popularity of the authors. You don't need to do any work. For each tweet or status update, the app studies how many friends or follows you have in common with an author, how many likes, comments, replies, and retweets each message has attracted, and how many friends and followers authors have. The tweets that are then deemed most relevant get placed at the front of the queue.

Unlike traditional typical clients that ask users to scroll down, Relevance presents one message per screen. You can flip through the messages one by one and preview linked content within each frame. 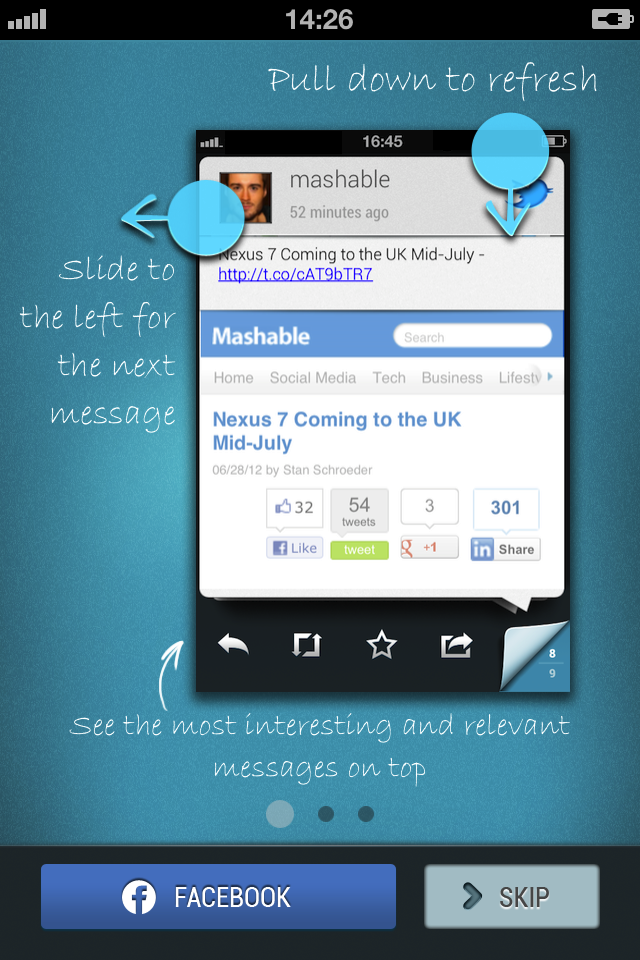 By clicking on a page-turn graphic in the bottom-right-hand corner, you can set how much time you have to read the messages. The less time you have, the more strict Relevance will apply its rules to the content sorting, so you can be sure you’re getting only the best stuff in the time you have available. To help make the experience even more relevant, you can mark messages as boring, upvote or downvote particular authors or posts, or mute them entirely. The app updates its data every time you refresh your feed.

Relevance looks beautiful, but it can be a little difficult to figure out. I took me a while to realize that I could drag a message partly across the screen to align with a menu item that would rate its importance (ie, boring, upvote, or downvote). And even though I was on a relatively stable wifi connection, switching between messages was cumbersome, with a detectable drag.

I do like the ability to preview linked content – such as YouTube videos, news articles, or images – without having to click on a link within a message, and the app shows the potential of auto-analyzing tweets and Facebook updates in ways that could prove very useful. Plus, the price is right: the app is free.

The company’s managing director, Kirill Petrov, says the idea behind Relevance “takes into account a user’s social graph along with the characteristics of messages to deliver information they want and not just what’s next.”

It’s not clear how the company plans to make money from the app, and it may indeed ultimately fall foul of Twitter’s terms of use, which seem to make life difficult for companies that have built Twitter clients. If Twitter decides that i-Free is presenting its timeline in a way that breaches its idea of how tweets should be displayed, this app could fast fall into irrelevance. So if you’re interested, you better get in quick.