Twenty minutes after 15-year-old Bobby Gladden shot and critically wounded a 17-year-old student at a Baltimore high school in what may have been a thwarted attempt at a mass murder, the news broke – on Facebook.

Perry Hall *Shooting* 4601 Ebenezer Rd @ Perry Hall High School. Confirmed 1 student shot, requesting Medevac to land at school. 1 subject in custody. If you have a child that attends this school, please do not run to the school. To check on your child either call them directly or call the school.

The news of the shooting at Baltimore County’s Perry Hall High School was first posted to Facebook page of “Baltimore County Breaking News”, ahead of all mainstream media. Hundreds of comments quickly poured in, with the expected chaos that characterizes any emotive Facebook discussion thread. Someone named Gladden as the shooter before that information had been officially released to the public, but the moderators took it down. Later, after the shooter’s name had been revealed by police, someone posted a photo of him in handcuffs, being led away by police. 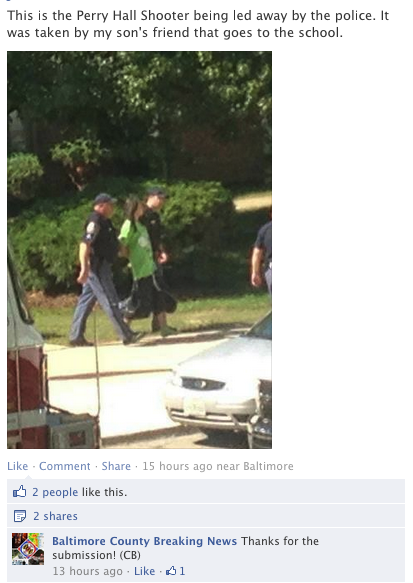 Gladden reportedly smuggled a shotgun into the school in parts so it would fit into his backpack, according to local news station WBAL TV. He was apparently in the process of assembling the gun when it fired, with the bullet hitting the 17-year-old victim. School staff members rushed to restrain the shooter before he could do any more damage. WBAL TV’s sources said he had 20 rounds of ammunition with him.

The news about the shooting presents difficult questions about the shift to a more empowered movement of citizen journalism. Baltimore County Breaking News is a group of seven volunteers with the stated aim of making citizens aware of breaking news and emergencies in their area. It’s the sort of hyperlocal news organization that has been trumpeted by journalism professor and new media commentator Jeff Jarvis.

But it’s not really a news organization.

The Baltimore County Breaking News Facebook group, which now has more than 11,000 followers – it had just over 8,000 before the shooting, according to the Baltimore Sun – is run by about seven volunteers, most of whom are connected in some way to the local fire department or police. None of them has a journalism background, or any significant journalism training, and they make the calls on how to moderate the page based on their gut.

Spokesman Ken Sigal told me this morning that the group bans any comment that’s considered hostile, racist, threatening, or demeaning to a specific individual. But it’s difficult to keep a lid on everything in a real-time social media environment. Sigal says the group deleted hundreds of comments in the wake of the shooting yesterday, and banned several people from posting to the page. It also took down any attempts to identify the shooter or the victim. “We do not put any type of identifiers on there or anything, especially when they have not been released to the public.”

Sigal, who stressed that the group doesn’t see itself as a replacement for the mainstream media but thinks of itself as a “people helping people” operation, said the feedback the group has been getting from the public has been “nothing but positive”. Indeed, many of the comments posted in response to the news updates yesterday lauded the efforts of the volunteer team. Others used the comments threads as an opportunity to vent their emotions, which ranged from despair to anger.

The page also presents the awkward sight of bad news being accompanied by “likes”. For instance, a post from late last night that revealed the shooting victim will remain in critical condition for the next 24 hours was met with 75 likes. 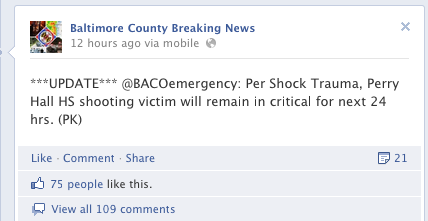 While for some, the comments threads seemed to provide a therapeutic value – providing an outlet for collective grief – others used the platform to advance armchair theories about why the crime was committed, and to express a desire for revenge.

One commenter said: “Kids raised in a heroine-infested [sic] community with their parents modeling criminal behavior for them are only going to continue the trend. If some of these parents would realize the impact of their own negligence on the world, we could start to put the breaks [sic] on this freight train to hell.”

In a post today that revealed Gladden would be charged as an adult, a commenter said: “hope he gets put on death row.”

Other comments appeared to show a reassuring self-corrective quality to the discussion.

“Check his juvenile record,” one commenter wrote about the shooter. “This kid was constantly in trouble with law, using drugs and BEING a bully... not a victim of bullying like people keep saying.”

Someone responded to that with: “Ummm,,, he has 1 thing on his record. The others you are seeing are for someone with the same name born in 1971.”

Another commenter followed up with: “Juvenile records are not public records.”

Sigal told me that the group is aware of the potential for a witch-hunt mentality to emerge on the Facebook page. “That is definitely something that we have considered and talked about quite a few times,” he said. “But by the same token, we firmly believe that discussions about things like this do help increase public awareness.” The group doesn’t ever want to stop the discussions, he said.

So far, the Baltimore County Breaking News team has done an effective job at moderating the discussion on the site, but the principles exhibited in this case pose uncomfortable questions for the future of news. What if a major news story broke in a similar way on a site that didn’t have such cautious moderators? What if wrong information posted to Facebook by armchair pundits – or people with malicious intent – led to some fast-response vigilante action by people who seek immediate revenge? How much trust can be placed in a group of volunteers to be the moral guardians of the stories that change our world?

Those questions remain unanswered, but for now it looks like groups such as Baltimore County Breaking News will only continue to grow in profile. Certainly, many citizens are grateful for the service. As one commenter remarked:

[T]hank you so much for keeping us updated on this tragic event. My husband and I have been glued to the news and internet. Scary world we live in now.

Update: WBAL TV reporter Lowell Melser took to Twitter to blast Twitchy.com for prematurely revealing the name of the guidance counselor who tackled the suspect. Twitchy defended itself by responding:

We have created a news model that allows people to read information that gatekeepers like Melser don’t want them to know. Our motto is “who said what.” His motto is “which official source said what, and we’ll let you know when we’re good and ready.”