Before You Throw That Windmill At Romney, Check This: Republican Governors Are Friends of Clean Tech

While Mitt Romney and Paul Ryan blast President Obama for trying to control sea levels and wasting money on clean tech companies like Solyndra, a new report has exposed what might be for both parties a slightly uncomfortable reality: key Republican governors have been huge boosters of green jobs in their home states.

In eight out of 10 cases, green jobs are growing the fastest in Republican or swing states, according to a report released yesterday by Double Bottom Line Investors, a venture capital firm that focuses on combining social, economic, and environmental issues with meaningful capital returns. Among the 10 states with the fastest rate of green job growth, only New York and Hawaii could be described as Democratic. The three states that registered the most pronounced growth between 2003 and 2010 are Republican strongholds: Alaska (98 percent increase), North Dakota (58 percent), and Wyoming (53 percent). Nevada, Colorado, New Mexico, Nebraska, and North Carolina round out the top ten.

When viewed through the prism of clean tech jobs as a percentage of the overall workforce, Republican states again come to the fore, dominating two the top three positions and six of the top 10, with swing state Wisconsin also in the mix. Alaska again tops the list (5.1 percent of the state’s jobs are in clean tech), while Montana (3.3 percent) comes a close third to blue-state Oregon (3.7 percent).

The report shows that while climate change remains a contentious political issue, green jobs are actually bipartisan. And despite the politicization of solar panels manufacturer Solyndra – which went bankrupt even after receiving more than half a billion dollars in government support – solar maintained a 28 percent growth rate when both direct and indirect jobs are counted. Between August 2010 and August 2011, job growth in the solar industry was 6.8 percent – nearly ten times that of the overall economy (0.7 percent). 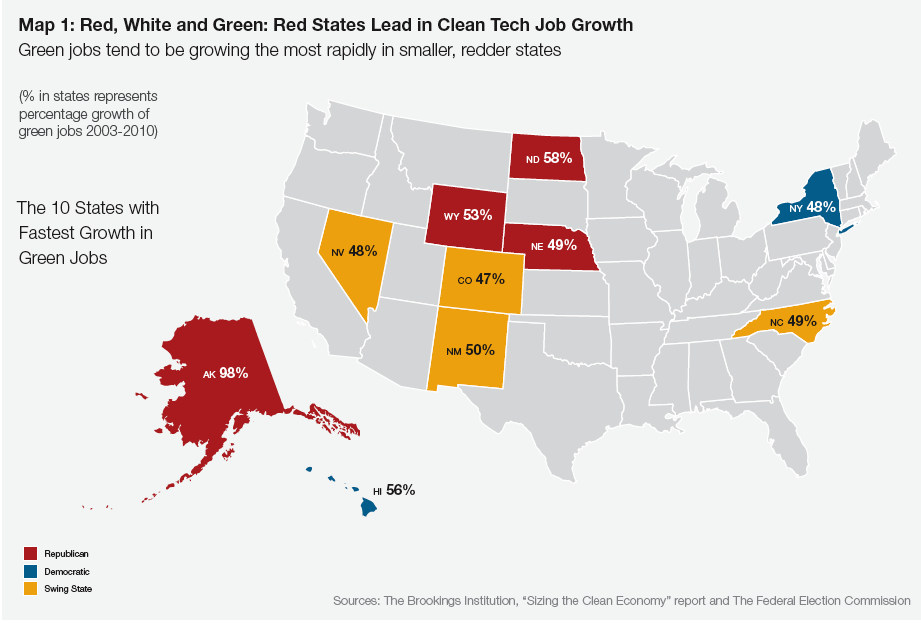 Federal legislators and candidates in this election may be “playing to the talk shows” on climate change issues, but state-level politicians are turning to green jobs to help their constituents, regardless of their political allegiance, says Nancy Pfund, a managing partner at Double Bottom Line and one of the authors of the report.

“Governors and politicians on the ground that are dealing with record unemployment levels, with economic displacement, and with all of the challenges that our society faces, are pragmatists,” Pfund says.

“Clearly the Republican governors did not get the memo that clean tech is controversial. They’re embracing it, they’re really wanting to support it because of the positive impact it can have for their constituents and economic development.”

A constructive way for politicians to navigate the touchy topic of climate change is to look at it in terms of economic development, Pfund says. That statement echoes a point made last week at the Democratic National Convention, where politicians stressed that while the two parties might disagree about climate change, both overwhelmingly support the idea of an innovation economy.

But to safeguard that innovation economy, government needs to ensure that clean technologies get the same benefits and subsidies that fossil fuel companies enjoyed in their early days, Pfund says. In a report released last year, Double Bottom Line showed that federal incentives for early fossil fuel production and the nuclear industry were much stronger than the support provided for renewables today.

Regardless of the outcome of this election, Pfund believes the political power of the green economy will continue to strengthen as more people enter the clean tech workforce. It certainly helps that that particular phenomenon is not limited to blue states.