GOOD Knows What's Up: Platforms Are the Future of Internet Content

GOOD has spent the last six years peddling its civic-minded journalism through its magazine, website, and newsletter, but today it is taking a big step into the future of the Internet by launching a platform: good.is. Ostensibly, the publication is expanding its scope so that it can function as a community of “pragmatic idealists”, but really it is proving itself an early mover in what will soon be regarded as an inevitably for Internet content: Platforms will take over the world of digital content – and although my colleague Paul Carr may disagree-- it’s all for the better.

The move, says Los Angeles-based founder Ben Goldhirsh, is an expansion rather than a pivot. Pretty bold talk given last year's widely reported layoffs, which lead to a Kickstarter campaign so the out-of-work staff could keep producing a magazine.

But Goldhirsh now says those layoffs have been made up with hires in other departments. (Yeah, that sounds like a pivot to me too.) GOOD will still publish its magazines and newsletters, and it is actually increasing its investment in editorial. But rather than just present a one-way conversation between publication and reader, GOOD will now be able to help a group of like-minded people share things of importance to each other. “It opens up the opportunity for something bigger and more important than what we have been doing," says Goldhirsh.

Thanks to Facebook, we’ve long had a place to share things of general interest among our friends, and on LinkedIn we can manage our business connections, but until now there has been no environment for our civic selves. “We didn’t have a social solution for sharing things that mattered,” says Goldhirsh. He’s not sure that GOOD is the final answer to that need, but he believes it’s a need that should be served regardless.

I agree with him, and I would extend the principal to all types of Internet content and interests, from music to business apps to personal connections. I’ve argued before that magazine journalism should get its own platform (separate to news), and that email could be better imagined as a communications platform. Platforms can offer a balance between personalization and curation, with the discovery-enhancing and conversation-spreading qualities of deep social integration. That way, consumers become not just audiences, but also conduits empowered with their own modes of self-expression and the ability to learn from their peers.

Facebook goes some of the way to providing those services, but it is so general and all-encompassing that its value as a content distribution mechanism is seriously compromised. Only a few of my Facebook friends care about the embroidery issues that I’m into, for instance, and I immediately unsubscribe from friends who share their inspirational Jesus quotes in their news feed. But what if there were a platform for craft enthusiasts, and one for the intensely Christian? Then those folks could meet like-minded others and discover apps and services that magnify their efforts within a community that gives a shit. Facebook Groups go some way to providing that experience, but they’re splintered and subject to the whim of ad-hoc user creation. There are thousands of duplications, ghost-groups, useless groups, and irrelevancies scattered all over Zuckerberg’s social network.

On the basis of providing a central distribution point for content that balances personalization and curation with social sharing, a few platforms stand out as industry leaders: Amazon for books and movies; Netflix for movies and TV shows; YouTube and Vimeo for all types of video; Facebook for friends and games; LinkedIn for professional networking; Longform App for magazine journalism; Flipboard and Pulse for news; Stitcher for radio podcasts; and, as of today, GOOD for civic interests. Each platform allows users to build profiles and then select for content according to their particular tastes. They also suggest content that the users might not otherwise have known about and let them check out what their friends, and people they follow, recommend. That’s two-thirds of what a great platform should be.

The other third is opening up the platform to allow third-parties to build products on top of it, and to host the resulting apps within the original environment. That’s what Facebook and Spotify do, and that’s what YY and Weixin are doing in China. Quick example: my favorite app on Spotify is from the indie music blog Pitchfork. It shows me reviews of the latest albums and then lets me add each one to my playlist with the click of a button. It also offers great playlists, such as the "200 Greatest Songs of the ’60s", which is just pure value.

By harnessing the creativity of independent developers, these platforms can improve their existing macro experiences while being able to focus on the micro details. They can also create their own app economies. That’s a large part of what has made iOS so successful and, because it takes a 30 percent cut from app revenue, Apple so rich. It’s also why Google is scrambling so hard to catch up with its Play store. 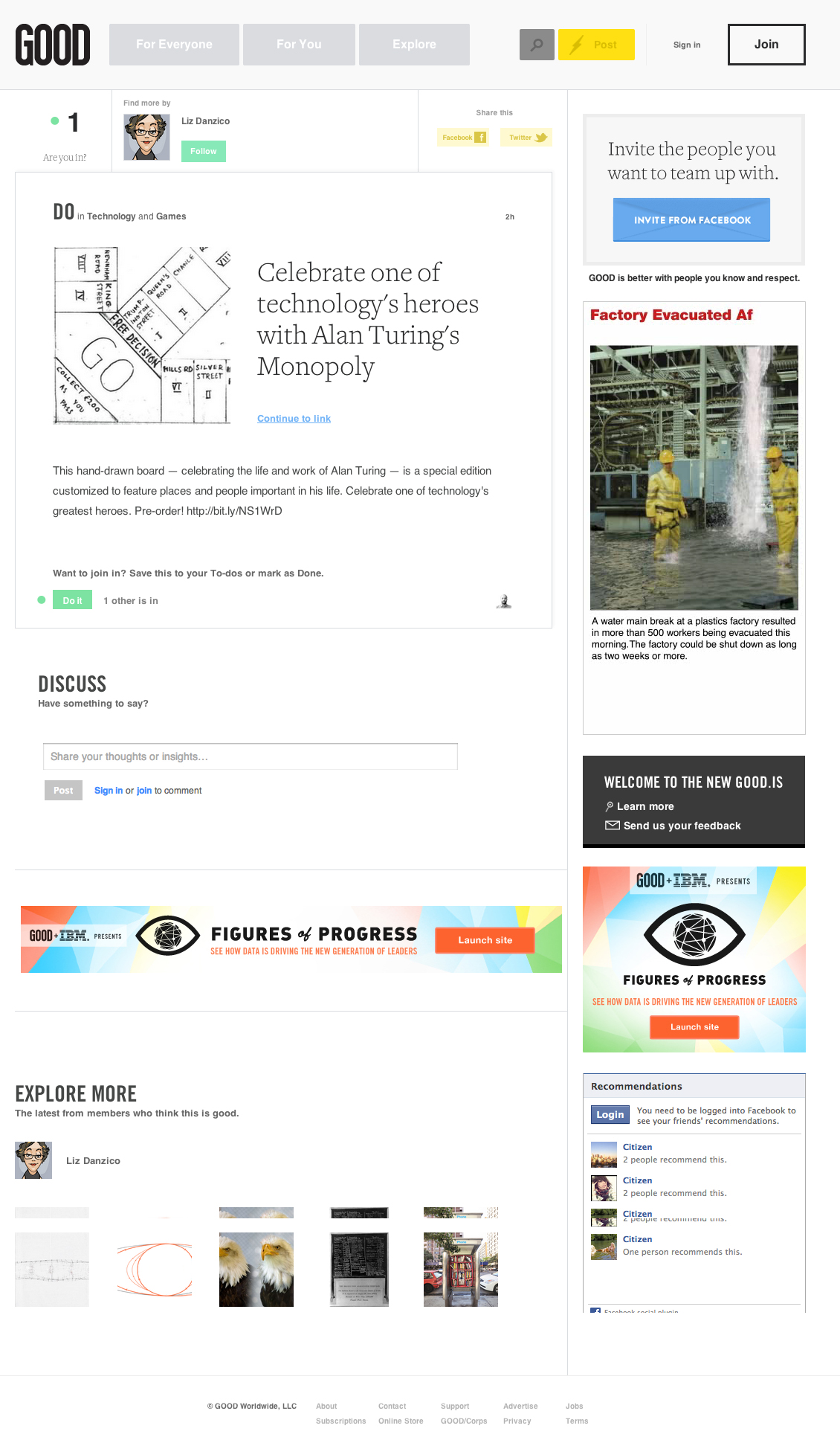 GOOD plans to do the same. Currently in beta, it lets you build a profile, follow people you’re interested in, post content to the site, keep a note of content that’s meaningful to you, and coalesce with others around specific causes. You can do the latter by adding things to a “to-do” lists or adding your vote to a highlighted section called “Together Let’s...”. Yesterday, for example, GOOD implored people to commit to hosting a dinner party on October 5 that would end with “taking action” (as part of an initiative called “The Feast”). For now, those are the bare bones of the site, but Goldhirsh says plans are in place to invite civic-minded third parties such as Kickstarter, Change.org, and Popvox to leverage the platform.

In its press materials, GOOD says the launch of the platform helps the company follow its mission of making “doing well by doing good” more attainable, enjoyable, and widespread. Having played around with it for a couple of days, I can confirm that it at least has the potential to achieve those goals. Just as importantly, I expect it will prove the concept of the platform as a superior digital product.

The platform, ultimately, provides wins all round. For consumers, it’s a centralized and flexible experience that makes discovery easy and social. For developers, it’s a powerful distribution channel with consistent standards. And for the owners, it’s a powerful way to engage an audience and the developer community while also building a sustainable business model that reaches beyond advertising. The power of the platform is only beginning to be unlocked. Watch closely as it happens – it’s the future of our Internet consumption habits.