One Million Tweets Can't Be Wrong: How the NFL Failed a Major Social Media Test

With over one million Tweets generated by a chain of events that lasted less than ten seconds, you don't have to be a fan of "sport" to know that something really off happened during last night's Packers-Seahawks Monday Night Football matchup.

Here's a quick summary: As the clock ran down with Seattle trailing Green Bay by five points, Seattle quarterback Russell Wilson threw a desperate Hail Mary pass to the Green Bay endzone. And as is wont to happen when quarterbacks throw desperate passes, it was intercepted by one of Green Bay's players, which should have ended the game in Green Bay's favor. But the referees were confused. Out of the two closest to the action, one ref ruled the catch an interception (as anyone with eyes could've easily gathered) while the other said that it was the Seattle player who actually caught the ball, making Seattle the winner. Here's an amazing gif of the conflicted calls created by SB Nation.

Ultimately, the referees ruled in favor of Seattle, despite evidence to the contrary. And to make matters worse, these weren't just any referees. These were "replacement refs" brought in after the NFL's labor negotiations with the real referees broke down.

Now, to be clear, you couldn't ask for a more perfect PR disaster for the NFL. Anger over mistakes committed by replacement refs has been simmering all season. This particular mistake was not only overwhelmingly obvious to the viewer at home, but also directly responsible for the outcome of the game. So no matter what the NFL did next, it wouldn't have turned out well. Nevertheless, the league's response on social media in the hours following the debacle was at best, misguided, and at worst, downright arrogant.

Immediately after the game, the NFL's social media team hit the ground running with the Tweet, "Touchdown or Interception? #GBvsSEA." Does the NFL consider the outcomes of its games to be as arbitrary as the results of an impromptu Twitter poll? And if so, what does that say about how much it respects its viewers?

Realizing its epic miscalculation, the NFL quickly deleted the Tweet. But the league's social overlords weren't done yet. Minutes later, it posted this to its Facebook page, showing the Seattle receiver Golden Tate making an easy catch, and NOT the pseudo-catch that ended the game: 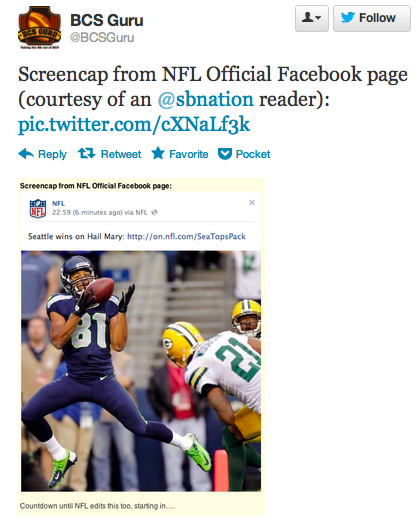 The first error could be written off as an innocent mistake. But the Facebook post comes off as a conscious attempt to mislead fans into thinking the final play of the Seattle-Green Bay match was anything but controversial. If you're a fan of the NFL, the message is loud and clear: You'll think what we want you to think.

And then there are the player Tweets. Shortly after the game, Green Bay Packers guard TJ Lang Tweeted, "Got fucked by the refs.. Embarrassing. Thanks nfl," followed by, "Fuck it NFL.. Fine me and use the money to pay the regular refs." Between the two, Lang racked up over 150,000 Retweets.

Major sports leagues have had a mixed record on social media. The NBA is probably most adept at balancing the interests of the league while giving players a healthy amount of freedom on social networks (just look at last Summer's NBA Social Media Awards which recognized players like Kevin Love and Jared Dudley who tweet with a distinctive personal flair). On the other hand, all four leagues have social media policies that bar players from Tweeting during games and for periods of time before and after games which, particularly in the case of the NFL, have resulted in some exorbitant fines for relatively innocent behavior.

Now, all eyes are on the NFL to discipline Lang over his post-game Tweets. But what may have at first seemed like an open-and-shut case of disciplining a player for publicly criticizing his employer may now come off as yet another attempt to silence dissenting voices, thanks to the piss-poor way it initially responded to the controversy.

But perhaps even more damning than the knee-jerk social media response is the official statement released by the NFL earlier today, which took no responsibility for the mistake and announced no steps to improve playcalling in the future. Ken Wisnefski, CEO of a Web marketing company told Adweek, "It is unlikely that ratings will immediately suffer from this. I agree that it is a major mistake to have a wrong call especially in this fashion, thus there is an opportunity for the League and [NFL Commissioner Roger] Goodell to express their support for the quality of the product and work to resolve this immediately.”

But so far, the NFL has done neither of these things.