We've written before about people who can't quite let go of companies they've sold. But Narendra Rocherolle may be the most extreme case of this I've ever seen.

He's announcing today he's raised a modest round from True Ventures, Freestyle Capital, Lowercase Capital, Resolute Ventures, and individual investors Biz Stone, Max Levchin, Shervin Pishevar, Greg Yaitanes, and Matt Mullenweg to buy back Webshots -- a company he co-founded way back in the prehistoric days of the Web. A few people have done this twice -- Skype and StumbleUpon come to mind. But I've never heard of anyone doing it three times. I mean, when most people call themselves "serial entrepreneurs" they mean they've had actually exits with different companies.

Because each time Rocherolle -- and his team which includes co-founder Nick Wilder this time -- have adapted the product to solve whatever the modern problem with photo-sharing is at the time. It started with screensavers, and this fall the new company, called Threefold Photos, will launch an app called Smile aimed squarely at parents of young children and families.

I like Rocherolle a lot, but I was prepared to hate this idea. The further we get in photo app evolution the more I seem to turn into a neurotic Woody Allen babbling in the corner holding an iPhone.

My one-year-old, Eli, does something adorable, like say, this: 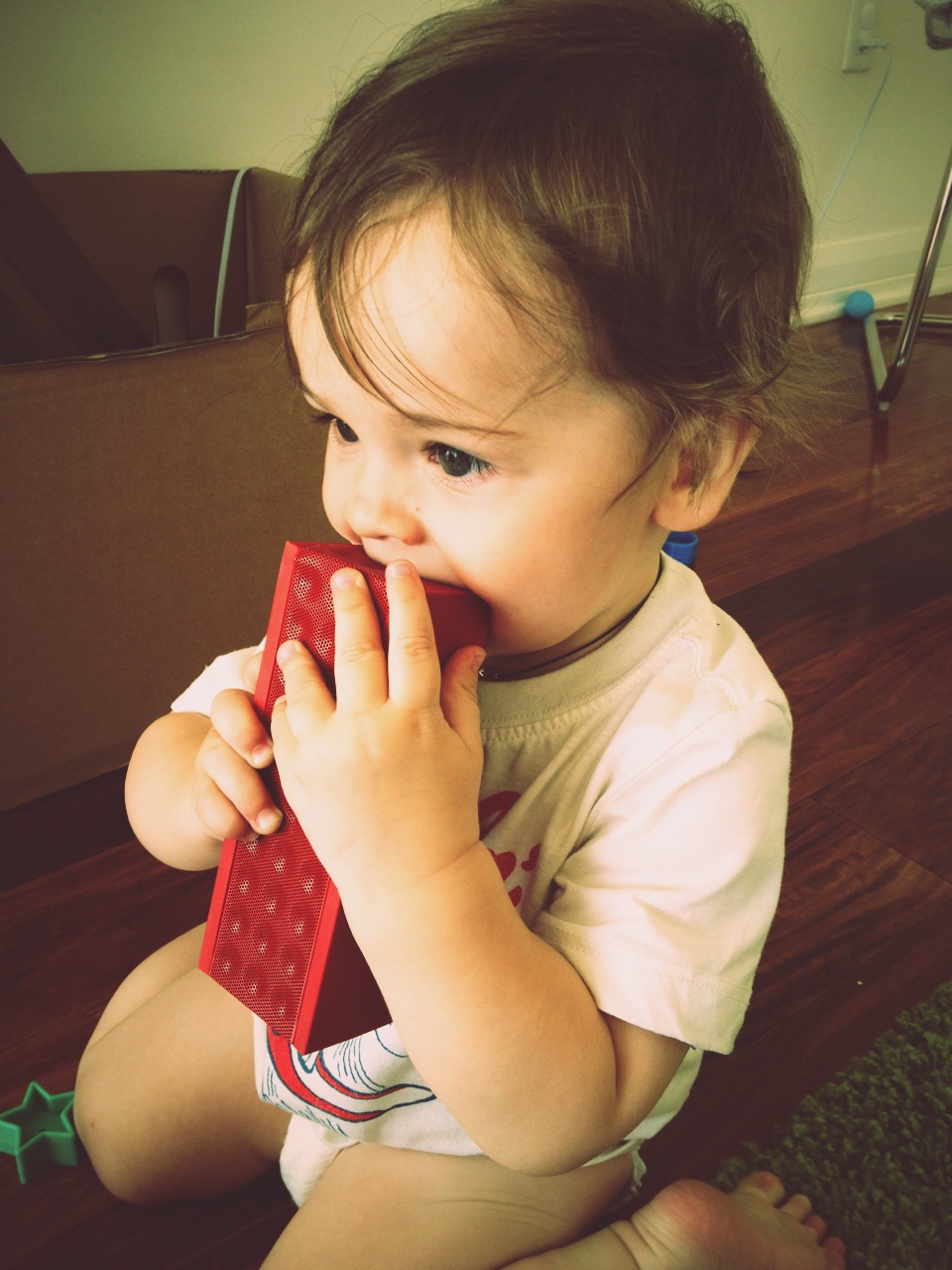 Oh great! I grab my ever-present iPhone and take a picture. Now what? Do I Tweet it, Instagram it, put it on Path or Facebook, or just email it to my parents? What is over-sharing and what is under-sharing? I get nudged when I haven't updated these networks frequently enough, but then you worry about flooding them all with the same photo at once.

And then there are all those snarky posts written by people without kids who talk about how much they hate seeing pictures of our adorable babies and celebrate baby blocking apps. First off: I was once like you. You'll eat those words, and I'm going to laugh. And second: Well, fuck you then. You don't deserve to see my cute baby!

Sure, I can share family photos on Path, and it's private and selected. That sounded great in theory. But my parents aren't joining Path, and they are the biggest consumers of Eli photos. In practice, my Path group is just a smaller network of the people who follow me elsewhere.

"Really?" I thought sitting pregnant across the table from Rocherolle who'd just welcomed his second baby into the world days ago. The two of us have an exponential explosion of baby photos coming at us, and nothing but angst on what to do with them. "You think people like us need more of this?"

I came away an hour later, actually thinking he may have solved the problem. By being so focused on people like me and Rocherolle, and the growing baby boom happening among Web entrepreneurs in the Valley, Smile isn't giving us another Instagram (filters! bars! we're cool!), he's giving us a dream app for grandparents. And the beauty is that it's doing something valuable that, if it works, people like us will pay for. And with a paid model, it doesn't have to be viral.

Launching this fall, Smile will collect all of the photos you have in fragmented collections all over the place -- on your desktop, on your phone, on Flickr, on Facebook -- and sucks them into the cloud. In testing it, Rocherolle discovered a whole trove of 1,500 photos he'd forgotten about. That'll be Smile's biggest hurdle: No matter how easy they make it, getting time-pressed parents to to upload all these photos will be a challenge.

But once they do, Smile offers really cool ways to organize, sort and search for them. They don't use keywords, they'll use things you tend to remember -- like when you took a photo, what you took it with, where you may have stored it, and in the future more sophisticated tools like facial recognition software. If you are looking for a picture you took in Hawaii at sunset, it may search for orange tones. You aren't searching for a file, you are looking for a memory, and Smile will look for them the way you'd recall the moment. "It must have been in 2007, and we were coming home from the hospital late at night..."

You can share albums, so you can see all the baby photos your spouse takes, and bring your relatives into the experience. There's a Twitter-like serendipity to Smile. I might be in the middle of a boring meeting on the East Coast and instantly get a picture of Eli swinging in the park. It's not just getting a text from my nanny, but actually getting to see what he's doing at that exact moment.

And via a slick-sounding mobile app, you can access all of those photos on the go. At the hospital a few weeks ago, Rocherolle used Smile to quickly cull through thousands of images and pull up pictures of his first baby to show the nurse how much he looked like the newest member of the family.

The target price for Smile will be about $30 a year, with special pricing for family plans. If it comes close to doing what Rocherolle and Wilder lay out, it'll be well worth it.

When he went to pitch True Ventures about investing the money to buy Webshots back (AGAIN!), Rocherolle laid out this vision first -- not mentioning the acquisition. They were sold. And then, he told them for a relatively small sum, they could buy an existing base of 7 million users. That's nowhere near the gargantuan size of Instagram, but with freemium models, you don't need gaudy numbers to build a big business. It allows Smile to start life with a nice base and build from there.

The Webshots brand name and legacy, on the other hand, doesn't lend much more than a great narrative. (Although for Rocherolle it's been a nice, self-regenerating piggy bank.)

In 1995, it was born as retail software that showed desktop screensaver photos. By 1999, they'd turned it into one of the first online photo sharing communities -- with public albums long before user generated content was a thing. That was juicy enough that Excite@Home bought Webshots for $82.5 million in stock (which could have turned out great or horribly for the founders, depending on when they sold that stock.) Once Excite went bankrupt the founders bought it back for a paltry $2.5 million.

By 2001, Webshots was profitable again as an early online photo community, bolstered by a strong freemium model. It grew fast enough that CNET then bought it for $71 million in cash, just before Flickr emerged, and Facebook used photos as the core of its massive social network. In 2007 CNET sold Webshots to American Greetings for $45 million, where it has been since.

Most founders who can't let go of their once-hot companies trap those assets in a sort of permanent state of nostalgia. The reason that Webshots has worked from creation to sale to purchase to sale to sale again (and then purchase again) is that Rocherolle has always used it as an installed base and a template for solving whatever the digital photo pain point of the time is. If you look at traditional entrepreneurial odds, it seems almost impossible that he could turn this sunsetted property around into another juicy success. But as someone square in the demographic he's targeting, I can tell you he's onto something -- whether young 20-something bloggers get it or not.