As last night's presidential debate sputtered to a close, one of the first articles published by Politico was a harsh judgement on Twitter's role during the debate suggesting that the  social network had officially "jumped the shark." For the uninitiated, the "jump the shark" metaphor is named for a "Happy Days" episode in which Fonzie jumps over a shark on water skis. Basically, it's used when a good thing goes too far and never recovers (advanced studies in "shark jumping" include Susan's death on Seinfeld and Niles and Daphne getting together on Frasier). As Politico's Patrick Gavin explained:

"Undoubtedly, it’s invaluable as both a live-stream of news and a center for water cooler conversation and gossip. But, as more and more people utilize the micro-blogging service — especially feverish news junkies for whom everything is tweet-worthy — it’s also become a relentless gush of information that can outgrow its usefulness by being too overwhelming to consume. (The 'like trying to drink water from a firehose' analogy proves apt.)

And that doesn't even cover the fake muppet Tweets.

But before diving into the argument, let's not forget this isn't the first time someone's accused Twitter of jumping the shark. Back in 2009, after Congressman Joe Barton joined the social network, Mark McKinnon of The Daily Beast wrote, "It’s time to Twitter the f%$k up." 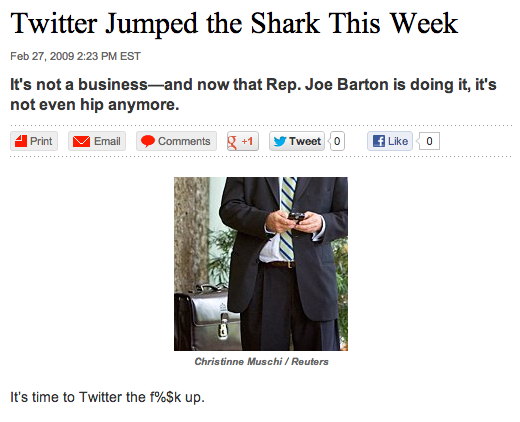 A month later, GigaOm's Stacey Higginbotham evoked the same phrase after struggling to make sense of the deluge of Tweets during SXSW: 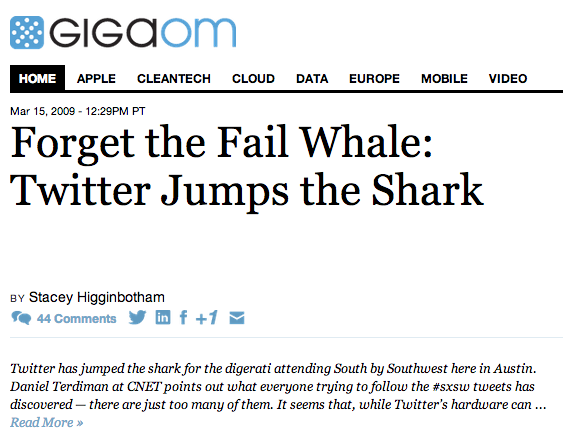 Then in April, Scott Brodbeck of Washington, D.C.'s NBC affiliate made a similar value judgment based on both the pointlessness of celebrity Tweets and the preciousness of Twitter's terminology (he singles out "Twitpic" as particularly grating.) 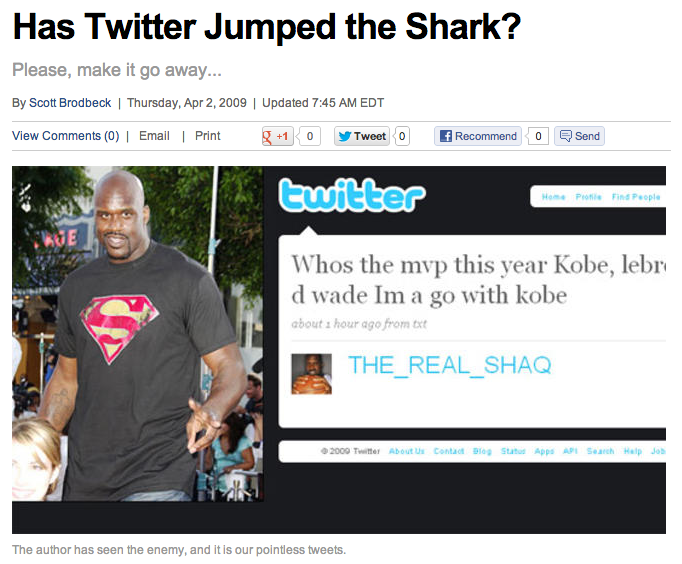 By 2010, at least writers were basing their prophecies on data, as PC World's Tom Stone does when he bemoans the number of inactive users. 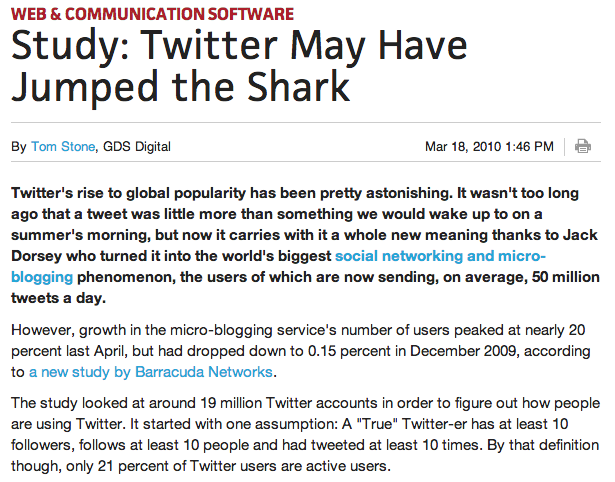 Today of course, there are more politicians than ever on Twitter, SXSW is still one of the most Tweeted-about events of the year, Shaq continues to Tweet pictures of himself napping at restaurants, and last year at least half of Twitter users were still inactive.

Yet none of this has sent Twitter flying over the proverbial shark, and for all the problems people experienced trying to follow the debate on Twitter, it was still the most Tweeted-about event in US political history (take that, Lincoln-Douglas debates).

That's not to say Gavin's concerns aren't valid. From the predictability of the parody accounts to the pointless Tweeting about the color of the candidate's ties, there was a lot of noise to contend with last night. (Buzzfeed raised similar concerns in its brilliant "Guide To The Social Media Lifecycle Of All Major News Events".) Of course, naysayers will always focus on the worst ways people are using a new technology, and last night, the "worse-case" argument could be applied to a lot more than just Twitter (see the overwhelming flood of debate-themed liveblogs, drinking games, and bingo boards).

But criticizing Twitter because some people use it to post boring stuff is like criticizing the telephone because some people use it to tell their girlfriends what they ate for breakfast. Twitter is just a tool, its use defined by its users, and we're learning more everyday about what it's good for and what it's not good for. Maybe last night we discovered it's not so useful for political elites to follow the biggest US political event of the past four years. Or maybe the system will self-correct as users become less tolerant of parody accounts and Tweets about the candidate's sartorial choices, quicker to hit the "Unfollow" button.

Either way, the simplicity of Twitter lends itself to easy adaptation. In 2009, did anyone predict that journalists in the middle of protests or combat zones would use Twitter to broadcast, curate, and verify information in real-time? Or that Twitter was capable of launching a comedy career like it did for Rob Delaney? It's impossible to know what the tech landscape will look like four years from now. But even if Twitter is long gone, when Hillary Clinton debates Marco Rubio or Mitt Romney in 2016, there will still be a demand for real-time political analysis.