Are analytics about to have their CPC moment?

Continuing a push to make big data analysis more granular and actionable, app analytics startup Mixpanel is launching a product that not only tracks specific user actions but also enables developers to market to these users based on their previous actions.

The company's founder, Suhail Doshi, claims that the new product — called Engage — is a step forward for marketers because these “action analytics” shift the focus to conversion and away from less precise results. Instead, Mixpanel can let developers know exactly how well outreach efforts translate into measurable effects within an app or on a website, such as how many people watched a particular video or saw a TV ad. It may mean that marketers are closer to being able to measure return on investment, something that has flummoxed them even though companies and brands have clamored for it.

Doshi views the new product as the analytics equivalent of online advertising’s shift from pay-per-impression to pay-per-click, although that might be overstating its importance. Analytics services such as Omniture and Google Analytics already provide sophisticated insights about specific users, even if they don't provide a mechanism to directly reach particular subsets through email or push notifications. So the leap from "analytics without outreach" to "action analytics" is not as great as from "We have very little idea how effective these ads are" to "Oh, we're getting X number of clicks per penny."

But let’s dive in a little deeper. With action analytics, developers or publishers can send emails or push notifications to specific groups based on how they use a particular app. Say, for instance, that you book flights but never hotels on Kayak. If Kayak is using Mixpanel’s new “Engage” product, it will know what you tend to do in the app without having to ask, and send you a push notification to let you know that – hey! – it has hotel deals, too. Or a game developer adds a new level to his mobile game and wants to tell people about it without spamming everyone. So he picks players who have leveled up through every stage of the game and are at risk of losing interest. It's a highly targeted kind of upselling. 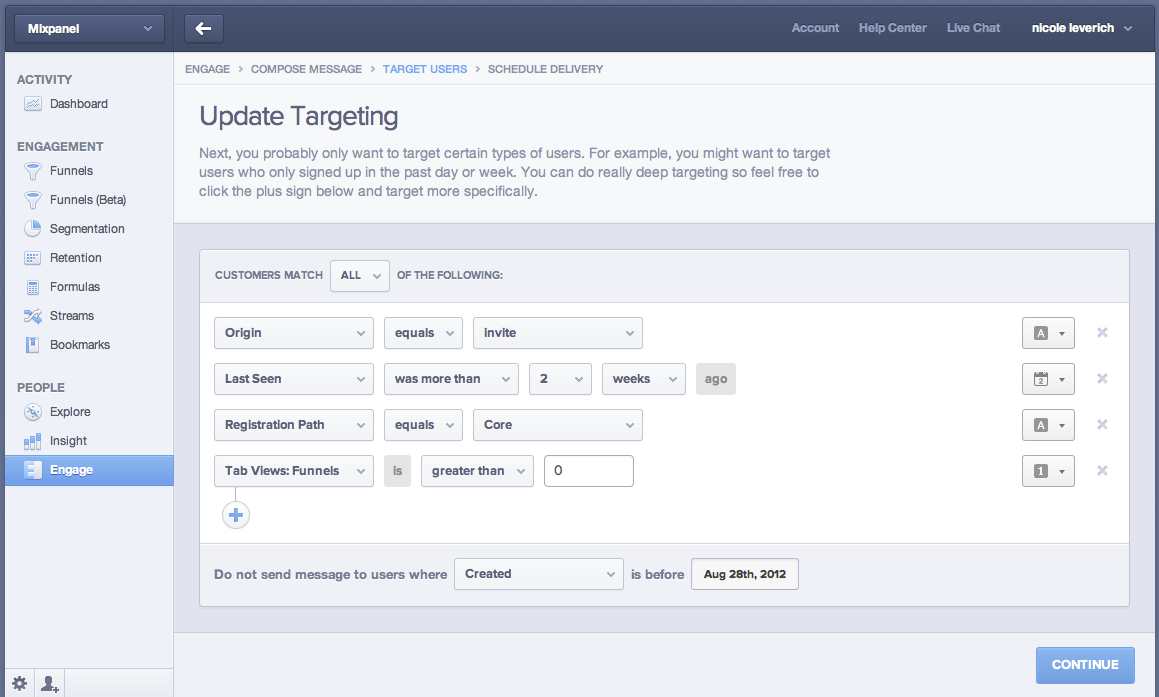 Until this point, Mixpanel has been a pure-play analytics company, letting developers gather then slice and dice data right down to the individual user. And the ability to target a very specific group of customers has also long existed -- Facebook and Twitter’s self-serve ads are examples of that -- as has the ability to assess analytics to determine which customers it make sense to reach out to. But few, if any, companies have seamlessly bridged the gap between the two goals, nor done so by leveraging dynamic data rather than predetermined lists.

You might think this kind of data-driven upselling could result in spamming, a criticism Doshi rejects. On the contrary, he says, the specific targeting negates “dumb” push notifications and emails that would otherwise go to blanket groups of users to whom the messaging may not even apply. This way, developers have a much higher chance of delivering their messages to the people who want to hear them. In other words a user wouldn't receive the equivalent of Viagra come-ons or Nigerian scams; he would only receive advertising based on his explicit interests or actions. Any user put out by overly aggressive marketing could always stop using the app.

Mixpanel is offering Engage free to subscribers of its “People,” feature, which allows developers to target customers on a person-by-person basis, and has plenty of runway with $10.25 million in Series A funding from investors including Andreessen Horowitz, Max Levchin, Marc Benioff, and David Sacks. It is also a graduate of Y Combinator.

Lawrence Wan, a digital advertising consultant in Shanghai, says the technology sounds promising. “In principle, this is exactly the right concept and technology needed by the digital media owners, especially ecommerce players,” Wan says. “If Mixpanel can help increase stickiness, repeat visits, deeper engagements and, for ecommerce players, transactions and high spends per transaction, it may become a killer app.”

The company’s immediate challenge will be in signing up customers. It claims more than 580 mobile and Web companies as clients and says it analyzes 6.2 billion actions a month. However, none of those partners have tested Engage -- instead, that onus has fallen on Mixpanel itself. Plus, the “analyze and engage” process is not immediately obvious to the uninitiated.

While the product might seem attractive to marketing teams that want to better track the results of their outreach expenditure, Doshi’s team has a lot of educating to do.