Just two days out of the digital womb, newcomer Frogo.tv is turning up the focus on full-screen video with a new website that features an endless flow of content, drag-and-drop playlists, and smartphones as remote controls.

Built by a small team of expats based in Beijing, Frogo pulls in content from YouTube – with more, including Vimeo, to come – for a “leanback” video-watching experience that lets you watch a steady stream of curated playlists. If you’re registered with the site, you can pair your smartphone with Frogo in order to control volume, add a comment to or share the video, and skip or pause via a basic mobile Web interface.

Frogo’s HTML5 technology is sharp, but it will compete in a tough market, specifically against YouTube’s “leanback” mode, which has recently been rebranded YouTube TV. The YouTube leanback experience is geared toward a smart TV experience, according to AllThingsD, but is also available on regular PCs. According to YouTube’s internal numbers, viewers watch twice as much video in that mode, which can also be controlled by a mobile device. At the same time, Frogo will also be facing off against Vimeo Couch Mode, which delivers a stream of selected videos to users at the click of a button.

Both YouTube and Vimeo, which have much deeper pockets, enjoy far superior user interfaces than Frogo, which looks amateurish by comparison. That’s mainly because Frogo’s designer only joined full-time about five days ago. Aside from him, the team has only three full-time developers, and a couple of part-timers. 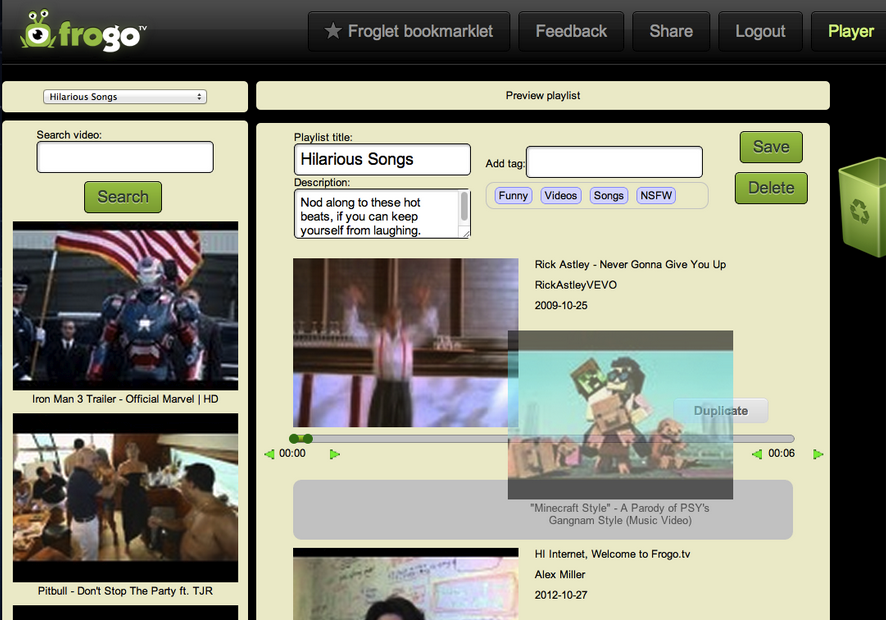 Perhaps Frogo’s biggest advantage is that it allows you to create playlists by simple drag-and-drop. That’s similar to functionality offer by Dropmark, a cloud collaboration tool, but it’s not offered by either YouTube or Vimeo. In fact, Vimeo doesn’t offer playlists at all, preferring users to build “albums,” which don’t offer continuous playback. YouTube, on the other hand, requires users to use “add” buttons for each video they want to include in a playlist. You can build playlists of YouTube and Vimeo videos with Embedr, but that requires a separate hosting website and asks that users copy-and-paste URLs or embed codes.

Frogo lets you build playlists within the website. You just go to the “Editor” page, search for whatever video you want by keyword, and then drag the videos into an editing box. You can re-order the videos by drag-and-drop. Frogo also offers a bookmarklet that can be added to your browser’s bookmarks bar, so you can add videos to playlists as you discover them in general browsing.

Frogo was founded by Alex Miller, an American who was most recently a senior product manager for advertising at RenRen, one of China’s largest social networks. He left the company soon after it went public in May last year and has been using the money he earned from the cash-out to bootstrap Frogo.

Miller describes Frogo as “a little like Pandora and a little like Pinterest” and says its key selling point is: “When you want to watch the Internet, just turn it on.” As it stands, Frogo feels very “beta” – perhaps even “alpha.” A “Discover” section throws up only a few playlist options, and while the functionality is all working, it is still very basic. This site has a long, long way to go. Relatedly, Miller and his team are now seeking investors.