Blogger given top job at a national newspaper – a world first?

This week in “News from New Zealand that's so crazy that you have to look,” a shit-stirring conservative blogger has been appointed editor of a national newspaper. As far as I can tell, it’s the world’s first case of a blogger taking over the top job at a newspaper.

Cameron Slater, a one-time sickness beneficiary* who runs a vigilante blog called Whale Oil Beef Hooked – say in a particular British accent and it sounds remarkably like a popular but profane exclamation – was yesterday named editor of the ironically** named Truth newspaper, a weekly tabloid that has been delivering scandalous gossip and stories of questionable veracity since 1887. This is the equivalent of Matt Drudge taking over the National Enquirer, or Michelle Malkin being given the reins of the New York Post.

In New Zealand, the appointment has elicited a collected “WTF?” from the blogosphere, although many of Slater’s fans have praised Truth’s bold move. Slater, a large man who refers to himself as “Whale,” is not your everyday blogger. As well as publishing posts with titles such as “Socialists Are Stupid,” he has staged a one-man campaign to get New Zealand to change its name suppression laws, which protect the identity of high-profile people charged with serious crimes. In 2010, he was found guilty of breaching name suppression orders when he published the names of an entertainer and an Olympian who were both charged with sex offences. His blog is the most widely read in New Zealand, registering about 600,000 page views a month. (New Zealand has a population of 4 million people.)

Slater will be making numerous changes to Truth, but probably the most significant is that he will launch a 24-hour news website for the publication. Rather than being a newspaper first, Truth will become an online daily publication with a weekend print publication. The paper is already down to a circulation of just 16,000 copies, small even by New Zealand's standards, which suggests Slater’s appointment is a last-gasp measure to keep the thing alive. 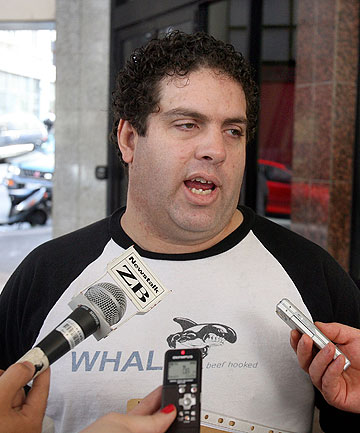 It’s relatively common for bloggers to have taken up jobs at print publications, and especially for print journalists to move into blogging – Andrew Sullivan (Newsbeast), Glenn Greenwald (The Guardian), and (perhaps) Clark Kent (The Daily Planet) are just a few who have bridged both worlds. But for an independent blogger to being given an editorship? That’s unheard of (at least, as far as extensive Google-searching tells me). Slater has taken an entrepreneurial approach to running his blog, posting to it on average about 20 times a day since he set it up in 2005. He has been very clear about his political affiliations – he is the son of a former president of the National Party, which is the centre-right party currently in power – and details of his private life. He has been jobless for years, and was at one point living off a sickness benefit he received on account of his depression.

“Prior to blogging,” he writes on Whale Oil’s “About” page, “I used to shout at the television news and rant at talkshow hosts.”

The best thing about this whole story is the press release announcing Slater’s appointment. “We took the pulse of the nation, and it had nearly bloody died,” Slater says in the statement, evincing true-blue New Zealand vernacular. “No bastard wants to read old news – they can get that online. We’ll be more of a views-paper that promises to deliver REAL news, REAL opinion.”

He adds: “The people are numb from the eyes down with the diet of PR’d crap they get now. I will not do it to them anymore – it’s not right.”

As much as newspaper editors might hate to admit it, there are uncomfortable truths in those statements.

Slater’s first issue as Truth editor will be November 8.

* I originally reported that Slater was on the sickness beneficiary, which is, in fact, outdated information. As he clarifies in the comments below, he was only on the benefit for a six-month period. It was widely reported in New Zealand. That he is now off the benefit has been less widely reported, which is why I made the error. I apologize.