We've said before that this is the Twitter Election. (In fact, 2012 might just be the Year of Twitter in general – more on that another time.) One of the fair criticisms of Twitter's role in the campaign, however, is that it's useful for capturing noise but not especially good at parsing it.

Twitter's own Political Index, powered by Topsy, is an attempt to measure sentiment about the candidates, but it is a rough and not particularly useful metric. Topsy evaluates sentiment by comparing how positively each candidate is talked about on Twitter. But because Twitter itself represents a limited cross-section of society and "sentiment" is such a slippery concept to grasp, there's no sense in placing any great stock in the ratings. (For what it's worth, Obama is sitting at a score of 32 out of 100, no change from yesterday, while Romney sits at 25, down three.)

Today, Twitter has launched another attempt to measure the texture of the presidential election. The Political Enagement Map visualizes how people interact with Tweets from the candidates.

Here’s how it works: Select Tweets, represented by a bar, from the left or right columns. Tweets are organized by engagement level, and the size of the bar indicates the level of engagement that Tweet received. Hovering over the bar previews the Tweet text, and clicking on it will show you the state by state engagement level. You can also search for specific terms to see Tweets from@BarackObama and @MittRomney about the topics that matter most to you.

The map is interactive, so if you select a particular Tweet – for instance, Obama's "Mitt Romney still won’t say whether he’d stand up for equal pay, but he did tell us he has 'binders full of women.'" – you can see that certain states are highlighted by darker shades of blue. The darkest ones represent the states that interacted the most with that particular Tweet. For Obama's "binders full of women" Tweet above, California, Oregon, and Washington (women-huggers) went nuts. 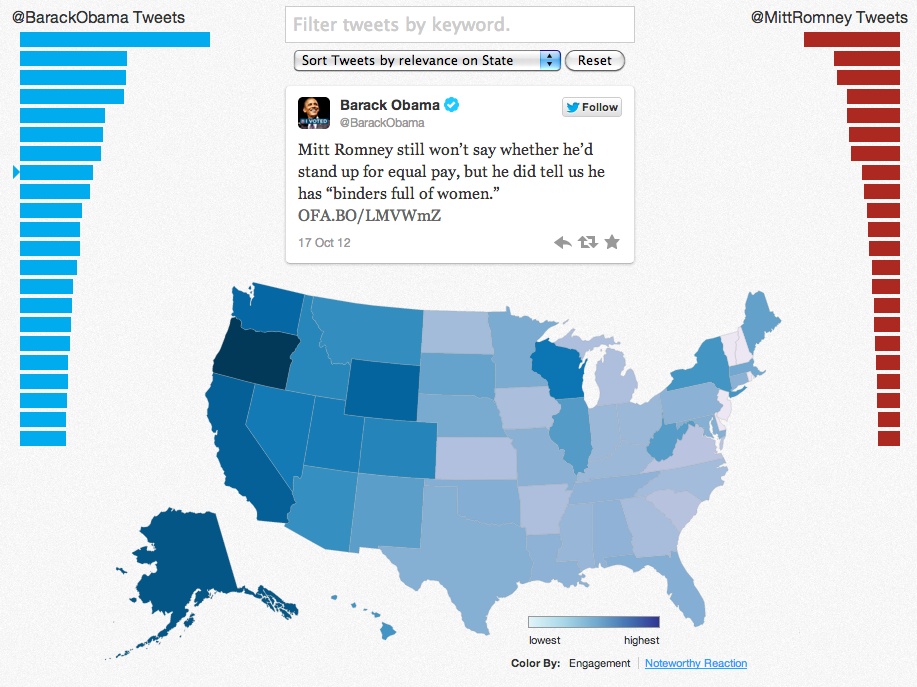 This map is a cool tool, but there's no need to get over-excited by what it shows. While the Tweet reactions ostensibly show a state-by-state response to particular issues, they're actually much more likely to be partisan responses to Tweets that touch on issues that people have already made up their minds about. So, when Romney says "coal is good!" of course Virginia is going to blush bright red. And when Obama says, "gay rights!" naturally California is going to go deep blue.

Who this tool might ultimately be most useful for are the campaigns themselves. Rather than get the barebones metrics of number of Retweets and Favorites, they instead get to see, quickly and easily, where particular campaign lines play the best – at least, among the people of Twitter. But remember, that's only a fraction of the voting population. What happens on Twitter is not necessarily representative of the rest of the electorate.