AOL has been down so long, it's starting to look like up

Good news! For the first time in seven years, AOL's revenue didn't shrink! The company said this morning that it brought in $532 million in revenue last quarter, flat with the same quarter one year ago. Which is to say AOL still hasn't seen any growth since 2005. Okay... maybe it's not such great news after all.

But AOL investors are happy. They pushed the stock up as much as 16 percent Tuesday, after AOL reported its earnings and promised a $5.15 a share dividend this December, financed by the $1.1 billion deal to sell and license its patents to Microsoft. AOL also posted a net profit of 22 cents a share, versus a 2-cent loss a year ago. That profit was well above the 17 cents a share analysts were expecting.

After three and a half years as CEO, Tim Armstrong is starting to see some success in turning AOL around. This is a notable accomplishment for two reasons. First, turnarounds in the Web industry are as rare as they are difficult. More often, they result in a company merely treading water and not really reviving. Second, AOL's turnaround was especially tricky because, for many years, its profits came from the aging dial-up subscription business that was a big business a dozen years ago.

Armstrong is making a lot of shrewd moves this year. He arranged the patent deal with Microsoft, giving AOL enough cash to buy back shares and offer a dividend. That won him the support of shareholders right in time to defeat a challenge by activist hedge fund Starboard Value. Armstrong has also succeeded in cutting some costs at AOL to shore up its profits.

AOL's stock is up 170 percent so far this year, compared with a 16-percent gain in the Nasdaq Composite. And the stock has a price-earnings ratio of 3.7. So on the surface, things are looking pretty good for AOL.

Things, however, look less good the more you dig beneath the surface. If you factor out the gain that AOL saw from the Microsoft deal last quarter – which would offer a clearer look at AOL's core business – the net profit over the last 12 months is a much smaller $90 million. Using that figure, AOL's price-earnings ratio rises to 43. The PE for stocks in the S&P 500 Index is 16.

Then there's the sticky question of AOL's subscription business. Although the Internet-access business is declining as people cancel their dial-up and broadband accounts, it has always been highly profitable. AOL doesn't break down the profits of its different segments, but in a 96-page presentation filed with the SEC, Starboard Value calculated that the access business has profit margins of 80 percent. Starboard argued that those profits were masking losses in AOL's display-ad sales and in Patch, its local-content initiative. 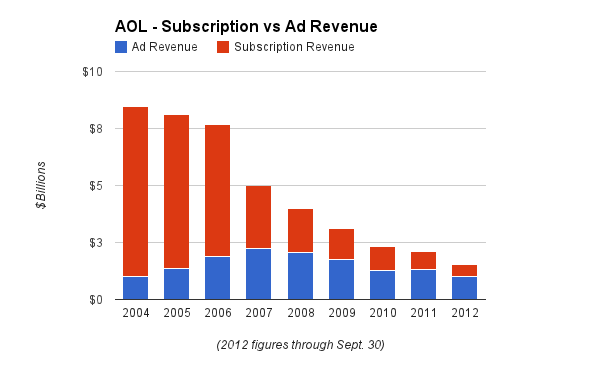 AOL has been working to stem the declines in its subscription business, with some success. It started bundling antivirus and identity-protection features into subscriptions, and the decline in subscription revenue improved to 10 percent last quarter from 22 percent in the third quarter of 2011. Even so, the business is declining by 10 percent a year, and so is its profit.

Armstrong has managed to reverse several years of declines in advertising revenue, but even here the growth rates lag the rest of the industry. In the first nine months of 2012, revenue from display ads rose 1 percent to $406 million while revenue from search ads were flat at $268 million. Google's revenue from search and display grew 21 percent in the same period.

AOL said ad revenue from its third-party network grew 20 percent in the quarter to $334 million. Which is impressive, but largely the result of a technicality. AOL jointly owns a Japanese display-ad business with Mitsui & Co. In February it bought a 3-percent stake in Ad.com Japan from Mitsui, enough to give it majority ownership and recognize its revenue as AOL's own. As a result, revenue from Japan grew to $25 million in the first nine months of 2012 from $700,000 a year earlier.

Meanwhile, projects like Patch, AOL's network of local news sites, continue to eat up cash. Armstrong said in a conference call that Hurricane Sandy had boosted readership of Patch sites, but he also didn't see the unit becoming run-rate profitable until the end of next year at the earliest. In the meantime, AOL will keep leaning on high-end video ads and low-end programmatic display ads. But the New York Times learned recently how troublesome programmatic ads can be.

Armstrong deserves credit for his progress in the difficult task of turning AOL around. He's done an even better job of pleasing investors and buying more time to make AOL a Web content company that can deliver sustained and growing profits. But he's not there yet. For now, AOL remains a company still dependent on profits from a dwindling Internet-access business. Nobody ever said that making money from online content was easy.