The math whiz – or, as he would refer to himself, aggregator of polls – predicted the outcome of the election perfectly (as of 1am). It's a win for data over gut. Because Silver reached his audience via Twitter and his blog, it's a win for new media over old media. It's a win for the one-man startup whose forecasts must now be taken so seriously that giants such as Gallup and Rasmussen must henceforth consider themselves only bit-players in the game of political polling. Tonight, Silver proved that they only tell a piece of the story. The truth has not been spoken until they have been aggregated, averaged, controlled for bias, and put through Silver's steam-powered algorithmaker. Punditry now must be based on math.

So now we can replace pundits with someone to read Nate Silver's blog posts, right? — Sam Weston (@sbones) November 7, 2012

And if Silver's the winner, who are the losers? Well, the Atlantic's taken care of that for you: It's a long list of pundits.

Oh, and by the way, Barack Obama will be President of the United States for four more years.

Also a winner in this election: Twitter. Tonight was the final, emphatic stamp of confirmation that Twitter is not only a broadcasting force, but a forum for ideas and discussion, for jokes and laments, for salutations and celebrations, and for being the most important virtual gathering place that has ever existed for political events. Seriously, who even talked about Facebook during this election cycle? Not the media. Tonight, the politicians hardly paid it heed, beyond a perfunctory cross-post (mind you, it was one that got 1.7 million likes; Romney's team didn't touch his page for the second half of the day). In fact, Obama lodged his first victory note by Twitter. Facebook, from where I was sitting, seemed close to irrelevant. (But then, maybe that was because I was on Twitter all night.)

Twitter owned the discussion. The high point: 327,000 Tweets-per-minute in the immediate wake of Obama's re-election, by far the most Tweeted moment of the election campaign. There were 20 million Tweets through the course of the day, making it the most Tweeted political event in US history.

This Obama Tweet (see picture above) became one of the most-Tweeted ever, with 369,000 Retweets as of 1am.

In other tech news, clean tech dodged a bullet thanks to tonight's result, according to GigaOm. "[I]f Mitt Romney had won, the next four years would be even more bleak than they already are for entrepreneurs, scientists and investors working on developing next-generation clean energy and clean technologies," wrote Katie Fehrenbacher.

And the other good news for tech? People loved the hell out of John King's giant iPad on CNN. 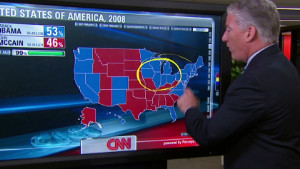 Now to the next four years. A Democrat-controlled Senate, a Republican-controlled House, and a Democrat in the White House. For a while, at least, they'll be as messy as the last four.