The Counterpoint launches with a lofty goal: Bringing sanity back to political arguments

President Obama has won a second term, but Congress is split: Democrats have the Senate; Republicans have the House. That means we can expect another two years, at least, of pronounced partisanship and political fighting. Of course, it's not always the case that one side is wrong and one is right. As the cliche goes, there are two sides to every story. The difficulty for the public is in assessing the validity of each side. That's where a San Francisco-based startup called The Counterpoint thinks it can help.

The Counterpoint, which is just a couple of days old, hopes to build a community of informed opinionators to discuss, identify, and highlight the best arguments that represent different points of views related to political news stories. The site's founder, Luis Perez, describes it as a mix of Reddit and Quora for topics that have no clear answer. Perez's aim: Nothing less than bringing objectivity back to political news.

The Counterpoint's algorithms and users highlight the strongest arguments for and against a news story's premise and allow informed readers to add facts and opinions to discussions on each topic, ranging from marijuana legalization to cuts to rejigging Medicare. Perez says he started the site because he felt readers haven't been getting the whole picture when reading the news. He feels that the likes of email, Facebook, Twitter, and discussion boards are too limiting when it comes to presenting different opinions and make it difficult to identify valuable content. Perez, a Wharton MBA originally from Caracas, beta-tested the site in Venezuela for its recent elections. "We hope that The Counterpoint becomes a channel not just for the US, but also for international political discussion," he says.

That's going to be tough. As political startups such as Ruck.us and PopVox have found, it can be difficult to attract an audience – let alone keep it engaged – to a site for political discussion. It's hard to determine why exactly that's the case. It may be that no-one has yet cracked the code, in which case The Counterpoint might as well try. It might be just general political apathy. But it could also be that there are already too many fora for discussion, many of which already accommodate and encompass political discourse. Twitter and Facebook are the most widespread and obvious, but there's also Reddit, Quora, the comments section of every news site, and a litany of other bit-players trying to muscle into the space.

Another factor worth taking into consideration is that if you have heard about an issue but haven't yet formed an opinion on it, there's a strong chance that you just don't care. It's a sad reality that people are happy with their biases, not knowing what they don't know, and not wanting to find out, which is why institutions like the virulently right-wing Fox News and the virulently left-wing MSNBC do so well. It would be great if The Counterpoint could disrupt that paradigm, but unfortunately it is a problem of culture rather than technology, and it's unlikely to be solved simply by encouraging people to read more, algorithms and up-votes notwithstanding.

Perez says he is a big believer in the wisdom of the crowd and that a key differentiator of The Counterpoint is that it uses a crowd-driven approach to highlight different points of view. Unfortunately for him, there's already one widely read site that relies on the wisdom of the crowd and has an almost indomitable advantage. It does a fair job of representing all viewpoints, not just on politics, but on any topic at all. It goes by the name of Wikipedia. 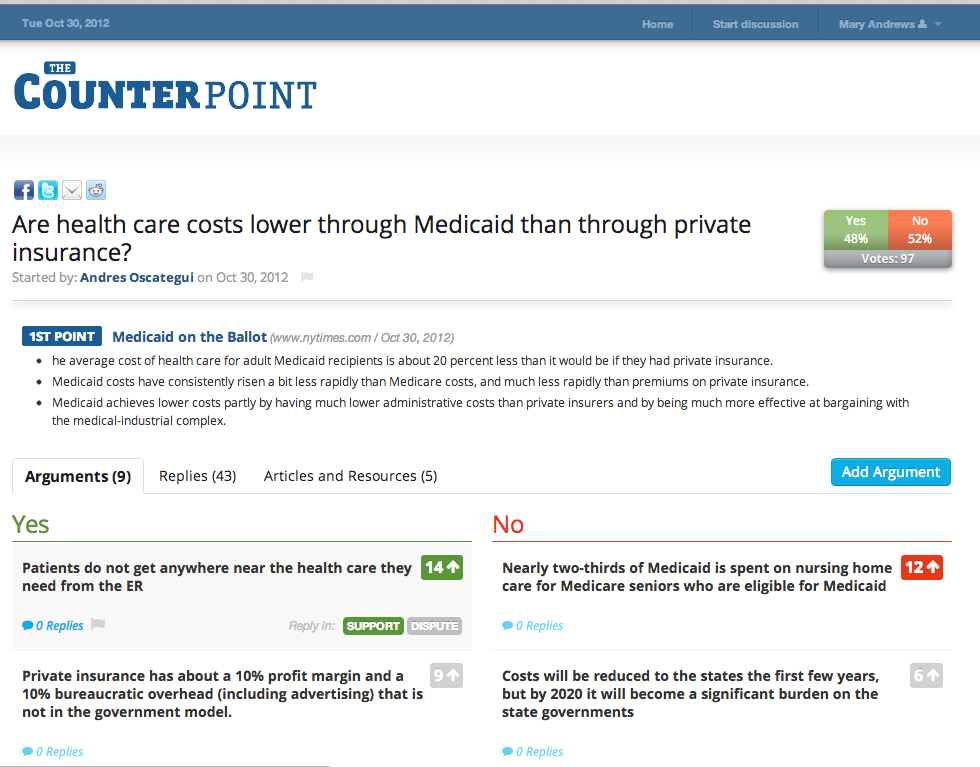