Newspapers take aim at Google News again. Maybe because they're no longer scared

For digital news publishers, nailing a prominent link in Google News has almost always been a good thing. It is a traffic boon. The automatic news aggregation service sends 4 billion clicks to news websites every month, according to Google. But some publishers – namely AP, AFP, and Rupert Murdoch – have long taken umbrage with Google, whom they have accused of leeching off of newspapers' content. Cantankerous Murdoch has called Google “content kleptomaniacs.”

Now, politicians and newspapers in Europe and South America are engaging in fresh revolts. In Germany politicians are considering legislation that would grant copyright protection to news excerpts that appear in search results, so publishers could get paid for them. France’s President François Hollande has threatened to pass a similar law if Google doesn’t start paying French newspapers by the end of the year. In Brazil more than 150 newspapers – representing 90 percent of the country’s newspaper circulation – opted out of Google News. Their reasoning: When Google News offers a headline and part of the first paragraph of a story, users are less inclined to click through to read the actual article. The newspapers acted despite the fact that Google News provides them a nice traffic bump.

Why so bold? One possibility is that Google News is in decline because of converging digital trends that are lessening its influence. The Web's big shift to mobile coupled with the explosion of social sharing, the increasing importance of human-powered curation, and tougher competition may be making the now old-school aggregator less potent. After all, when those Brazilian newspapers cut out Google News, they suffered only a 5 percent drop in traffic.

It's difficult to get good data on what exactly is happening with publishers' traffic referrals from Google News. One Web editor at a major news site told us that, anecdotally, referrals from Google News seemed to be on the decline, but he didn't have the numbers to back that notion up. (The editor didn't want the publication named because it considers such information private.) Marty Moe, chief content officer at Vox Media, which owns The Verge, Polygon, and  SB Nation, suggested that Google News is no longer alone at the top of the referrals food chain. "It used to be the main referral driver for many publishers, but as social has risen, it is one of several important components," Moe said in an email. An editor at another popular publication told us that less traffic has been coming from Google News. Then again other aggregators, such as the HuffingtonPost and the DrudgeReport, are also becoming less important.

Google's 10-year-old news service hasn't entirely lost its mojo. Google as a whole is still a hugely important driver of traffic. Google Search and Google News combined account for 30 percent of traffic to the US' top national news sites, according to a May 2011 study by Pew, which is now somewhat outdated. (Frustratingly, Pew didn't separate Search and News, so we can't tell you exactly how important the latter is.) At that time, for instance, Facebook hadn't yet reached 700 million users. Today, just 18 months later, it has passed the 1 billion mark. Yet in that same survey, Facebook alone emerged as the No. 2 or 3 referrer for most major news sites, accounting for as much as 8 percent of traffic to some of the top sites. It is also a popular news conduit among younger people, who are the future generations of news readers. 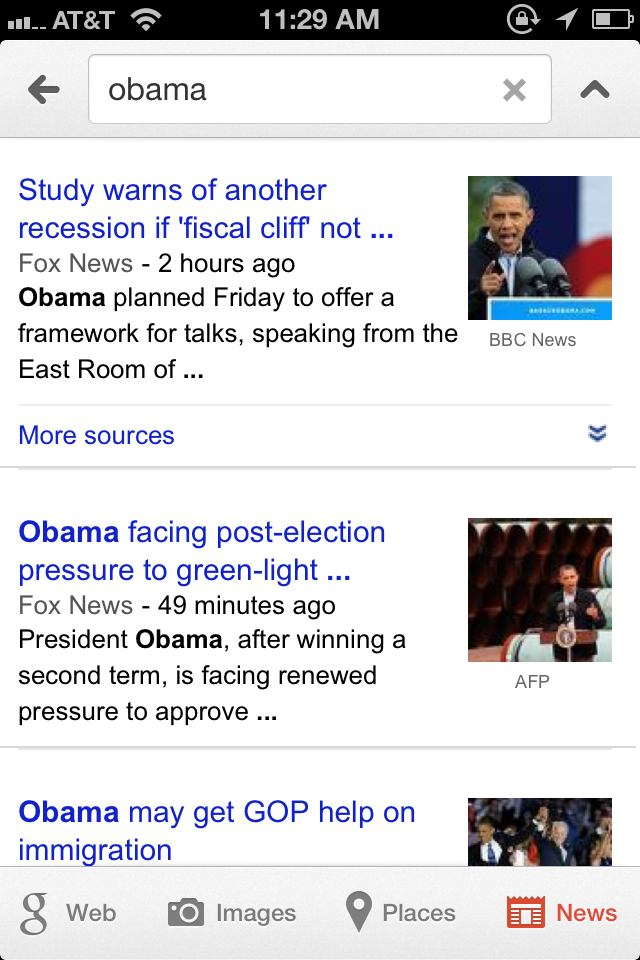 Google News on the iPhone 4

There are a lot of strong forces at play in the ever-tumultuous news industry that could compromise Google News' dominance. First, we now live in the Age of Mobile, and it’s not clear how well Google News performs on smartphones. From its iOS search app, the “News” tab does sneak into the homescreen, in the form of a button in the bottom-right-hand corner, but it is not especially prominent. Google News makes a lot of sense in the desktop environment, where there’s a lot of screen space that facilitates the display of long lists of links. But it’s less well suited to mobile, where, on the iPhone 4 at least, it's only possible to display three story links and a couple of excerpts.

That could be a problem for Google, because people are increasingly using their mobile phones to read news. According to a more recent Pew survey, published in October, 62 percent of smartphone owners use their phones to read news at least weekly, which makes it second only to email for smartphone activities (not including talking). The same survey found that 61 percent of smartphone news consumers read longer stories at least sometimes.

Another challenge for Google News has been the emerging mania for curation. At our recent PandoMonthly in New York, Spotify founder Daniel Ek said that the next step in the music company’s evolution will be helping people “make sense” of the abundant content. In a world of 20 million songs, he wondered, how do you decide what to listen to? He flagged the Pinterest-led curation wave as an important phenomenon. Pinterest proves that a mix of algorithms and human judgement can provide a superior content consumption experience.

Indeed, there’s evidence to suggest that many Web users are becoming more curatorial in their consumption habits, a point supported not only by Pinterest’s rise, but also by the growing prevalence of services such as Foursquare’s “Explore” feature, Twitter’s “Discover” section, Reddit, HotelTonight, Longform, Longreads, Jason Kottke’s blog, and Dave Pell’s NextDraft newsletter. In all those cases, people hand over part of their consumption decision-making to a third party. Spotify, Instapaper, Netflix, Amazon, Twitter, Facebook – they all increase the amount of stuff that competes for our attention on a minute-by-minute basis. As mobile and apps accelerate the proliferation and accessibility of content, it’s likely that we’re going to rely more heavily on filters to navigate this era of abundance.

Which leads us to back to social sharing, which is perhaps the most important blow to Google News’ relevance. That Pew media survey from last month also showed that the percentage of Americans who say they saw news or news headlines on social networking sites had increased from 9 percent to 19 percent since 2010. For people younger than 30, just as many saw news on social media (33 percent) as had seen any TV news (34 percent). Increasingly, news is coming to us through our friend and interest networks, via Twitter, Facebook, Tumblr, and LinkedIn especially.

Today, there's simply less need to seek news out via aggregation services. That’s a fact that Buzzfeed, which relies on social sharing for the lion's share of its traffic, has pretty much bet its business on. On most of its stories, Buzzfeed displays a "stats dashboard" that shows where each article's referral traffic comes from. In three randomly selected pieces (this one, this one, and this one), traffic from "Google.com" came in well below traffic from Facebook and Twitter, and in some cases Reddit, Tumblr, and Digg.

Finally, these days Google News just faces much more competition than ever before, from startups, apps, websites, and even traditional publishers, who have become more digitally savvy. Now that we’re in an era in which reading on smartphones and tablets is a norm, apps such as Flipboard, Pulse, Feedly, Prismatic, Zite, Flud, and Sumly, just to name a few, are all vying for attention, providing news reading experiences that are not only competitive with Google News but also better looking. Newspapers such as the New York Times, the Guardian, and the Wall Street Journal, meanwhile, boast slick apps and HTML5 sites customized for mobile. And for many readers, Reddit, which has focused on community rather than straight aggregation and is registering massive growth, provides yet another reason to never visit Google News.

This means that readers have more, and sometimes better, options for discovering and reading news, and publishers have other viable traffic-generating options. Perhaps that is why publishers in Europe and Brazil are acting now to slay the search beast. They sense a vulnerability that Google News didn't have even a year ago. Maybe, just maybe, they're feeling lucky.