Pardon the disruption: Magine reframes the future of TV to make it broadcaster-friendly

Open an app on your phone and start watching live TV with all the channels you’d get from cable. Pause halfway through and switch to your iPad, then pick up exactly where you left off. Scoot back in time to watch a show you missed from yesterday, then skip to the end with the drag of a finger. Sit on the couch and browse curated lists of programs on your smart TV. Watch the sports channel on the bus while on your way to work. And only pay month to month for the whole service.

This is the future of TV as envisaged by Stockholm’s Magine. The startup already has a working beta being used by 2,000 people in Sweden. The product has been three years in the making. It has 40,000 people on its waiting list, and the company has €6.5 million (US$8.3 million) in seed funding from family offices and angel investors.

Magine – say it like “imagine” without the first letter – is effectively a cable TV provider that operates solely on the Internet. It will compete squarely against Comhem, Sweden’s Comcast equivalent, and providers in whatever other countries it moves into – something it plans to do sooner rather than later, starting in Europe.

Last week at Stockholm’s SIME Internet media conference, Magine’s founders demonstrated the app on a sub-optimal wifi connection on stage in front of about 1,000 people. It worked seamlessly, streaming live TV, moving fluidly between channels, and jumping smoothly from point to point within specific programs.

Then, in an off-stage interview, founder and product head Mattias Hjelmstedt showed me the app working on a 3G connection on an iPad. I also played with it myself, and days later used an iPhone version that performed with the same fluidity purely off 3G. Make no mistake: Magine provides a great user experience.

However, this is not territory where startups can tread lightly. We have long been promised that the Internet would change TV for the better. It has, but only in bits and pieces. We have video-on-demand services such as Hulu and Netflix, which live in much different environments to live television. We have online TV channels, such as Current TV and the myriad offerings on YouTube. We’ve had applications that provide programming to compete with broadcasters. We’ve had Joost, Slingbox, Roku, Zattoo, AppleTV, and broadcaster-owned products such as BBC’s iPlayer, HBO Go, and all the on-demand websites for broadcasters around the world. None has been able to supplant or truly revolutionize cable television.

"TV,” as Magine co-founder and CEO Erik Wikström puts it, “is still the king of the living room.”

That’s why Magine isn’t trying to disrupt television. In fact, Wikström says the company is trying to help broadcasters. It doesn’t want to be seen as a bunch of “Internet cowboys.” It might be significant that Magine is one of the few Internet companies to have actually removed the “i” from in front of its name.

In that sense, it fits into a wider movement of Internet startups that seek to work with, rather than up-end, traditional incumbents. Prominent arrivals in this cooperative space include the universal film queue app GoWatchIt, subscription movie tickets service MoviePass, magazines-for-tablets bundler Next Issue, and Spotify, which Daniel Ek started as a way to provide a better alternative to piracy.

Magine is really just an aggregator of broadcast content and TV channels, making their shows truly portable and cross-device, potentially expanding their audiences. All the content is packaged as the broadcasters would present it on any other distributor, complete with ads. Magine doesn’t include any ads of its own, and it provides real-time data to broadcasters. The TV guide looks just like the visual schedule on any cable service, and viewers can go back in time seven days to see shows they otherwise would have missed. That time period is only restricted by the length of time for which the broadcasters have the rights to content they’ve licensed from studios. 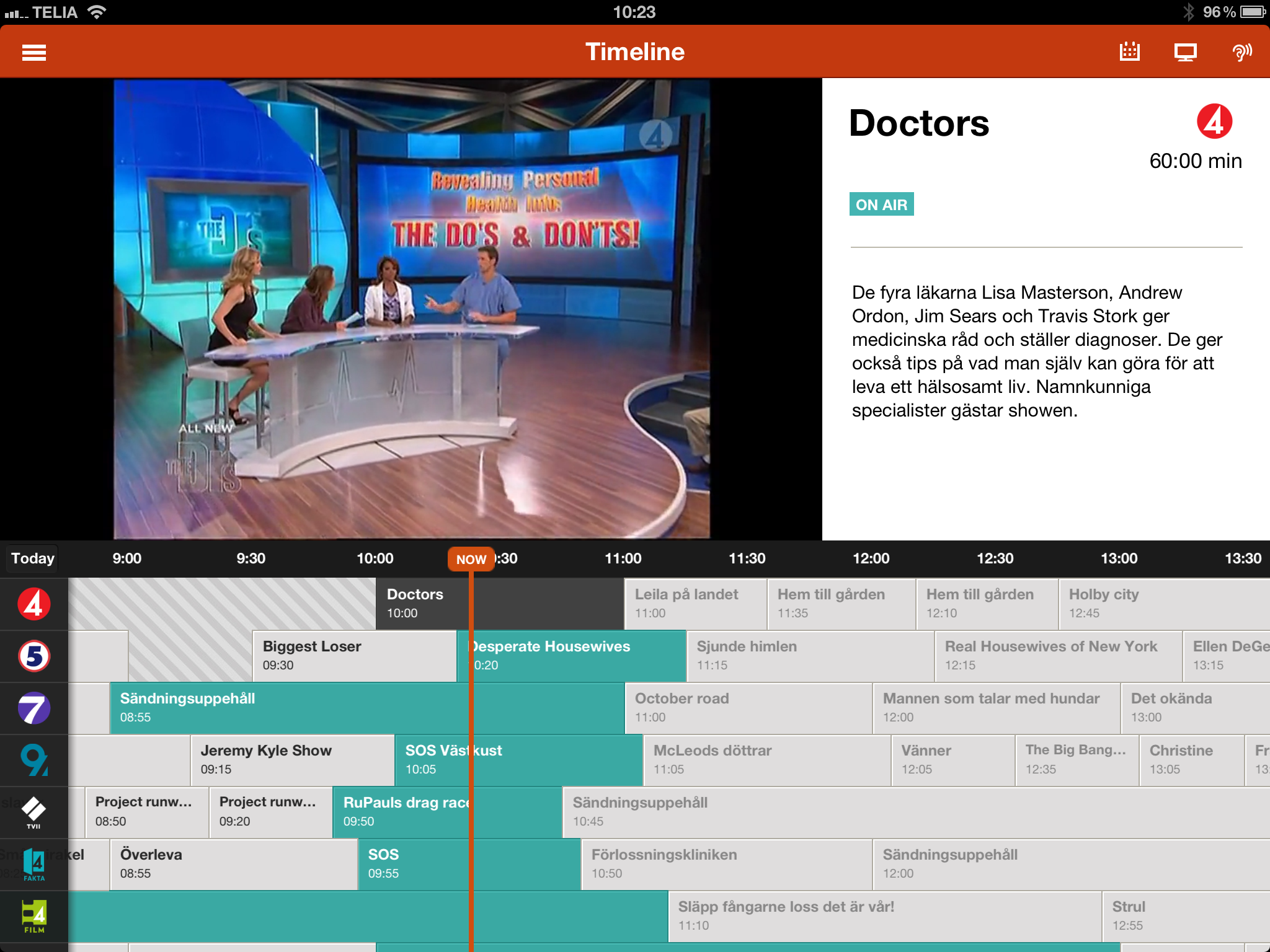 iPad view of the Magine app

Wikström sees Magine as a product for the mainstream consumer, but he says it could also help broadcasters connect with cord-cutters and the “lost generation,” the 18- to 24-year-old demographic that prefers to get their content online and on-demand. “We're not TV in a new device,” he says, “we’re TV in a new way.”

From a product perspective, Magine is the dream, says Jason Hirschhorn, the former co-president of MySpace and former president at Sling Media, maker of the Slingbox. “This service is a perfect complement to an existing TV subscription,” says Hirschhorn, who has also been a chief digital officer at MTV Networks and is now author of the Media ReDEFined newsletter. “This is really what ‘TV Everywhere’ should be. Not just certain programs on demand, but the ability to take your package with you and watch live and on-demand anywhere, as long as you are still a customer.”

But the pay TV industry doesn’t always work in rational ways. Magine’s success is anything but assured. Even though Wikström insists that broadcasters like the service, the company is bound to find itself mired in complicated and protracted rights discussions. For instance, Hirschhorn says that content providers in the US have dragged their feet on “TV Everywhere” partnerships, waiting for deal renewals and the dollars that come with them, even though it behooves them to have their content be portable.

“Windowing on content is how this industry works and it supports the cost structure,” says Hirschhorn. “So being innovative and first for your customer in terms of access takes a back seat sometimes to revenue maximization.”

For the time being, Magine isn’t even thinking of the US. The media consolidation there makes it pointless to even try at this point. Time Warner Cable, for instance, is not only a cable provider, it is also a content owner, even though it is now independent of Time Warner (yes, that’s confusing, but true nonetheless), which owns HBO, New Line Cinema, Warner Bros, and a bunch of others. There’s no way it would cooperate with an Internet-based competitor that would steal customers.

So Magine is at first concentrating on Europe. It expects to be in “two to four” markets by next year. Wikström demurred when asked how many broadcasters Magine has signed up, which suggests it is still facing difficulties in forging agreements. One venture capitalist told me his concern with Magine was that it’s so far unclear how successful the company has been in shoring up the licenses.

In response to emailed questions seeking clarity on its broadcasting license deals, Magine later said: "We have enough major broadcaster deals to launch right now, as well as multiple international deals with the leading content owners. These will be announced shortly after consultation with the respective owners." The beta version has 16 channels signed up to "beta agreements," and the company says it expects to launch out of beta with between 50 and 100 channels on board. 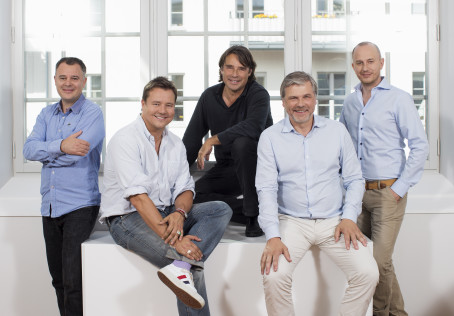 Aware of the challenge, Magine has built up a strong team that mixes pay-TV industry experience with technical expertise and marketing nous. Wikström is a serial entrepreneur who co-founded an early Internet consultancy called Icon Medialab and a venture capital firm in Beijing called China Venture Lab. Product head Mattias Hjelmstedt came to Magine from Voddler, a video-on-demand company. And chairman Michael Werner is a former executive with pay TV networks in Scandinavia, Italy, and Spain, as well as the founder of media investment firm SMI Media Invest. The startup also recently hired Andreas Liffgarden, the man responsible for negotiating Spotify’s bundling contracts with telcos in Sweden. It has a team of 38 people now and expects to hit 50 before the end of the year.

Wikström says Magine’s price of subscription will be competitive with cable providers and available on a month to month basis. There’s no need to lock subscribers into a year-long contract, he says, because Magine doesn’t need to subsidize a set-top box. The company is also trying to get the product bundled with smart TVs, and it will offer a “freemium” option for viewers who aren’t willing to subscribe. In the future, it plans to open up its API to make Magine a platform for third-party apps, with personalization features and social sharing integration coming soon.

It’s easy to forget that we are only at the beginning of the age of Internet-enabled and -distributed content – “Day One,” as Jeff Bezos calls it. It is possible that for some industries, perhaps even entertainment, disruption has passed its peak. If Magine prevails, we might well find that the future of television looks a lot like the television we know today, minus, perhaps, a cable company or two. And who’d really miss them?