Welcome to the Weekly Wrapup! Every Friday we collect some of the most memorable stories taking place on the social web. This week, the embattled John McAfee started a blog, more questions were raised about how the Israel-Gaza conflict played out on Twitter, and a piece of "business poetry" published on our site became a big hit.

A FUGITIVE BLOGS (AND TWEETS) 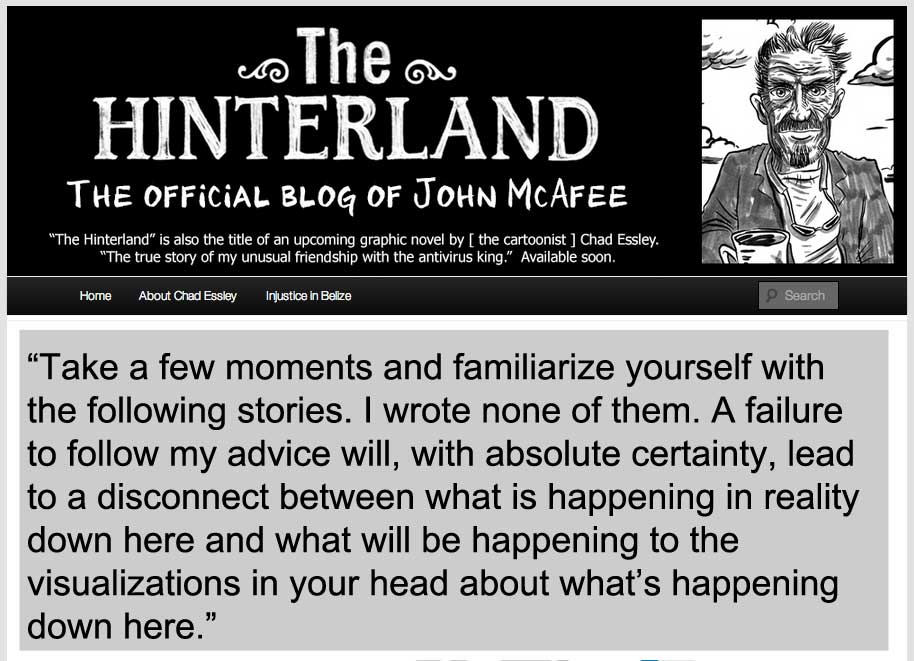 Over the past weekend, John McAfee, the anti-virus pioneer and now "person of interest" in a Belize murder case, started posting his on-the-run musings to a blog called "The Hinterland." On the blog, he talks about love, disguises, and journalists in a disjointed yet hard-to-resist style. Oh and he Tweets now, too. 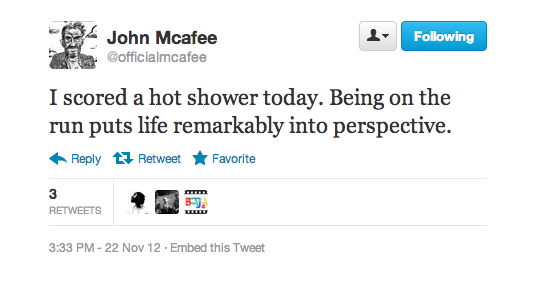 Ten of the biggest funding announcements this week, in GIF form.

THE ONION EXPLAINS THE SECRETS OF SOCIAL MEDIA

By watching this video, you too can learn how to "eliminate the need to provide value to anyone." (As PandoDaily's Head of Social Media, I hope my boss doesn't see this...)

YOU ARE COMMITTING A CRIME RIGHT NOW 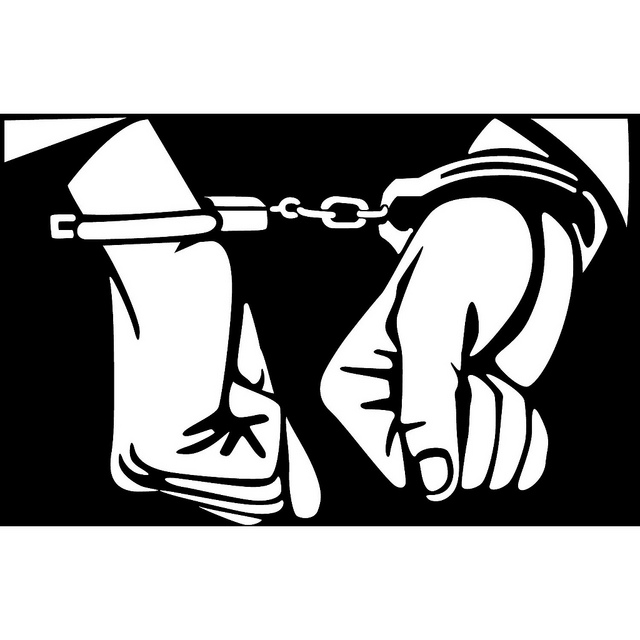 Read this fascinating blog post on "The Computer Fraud and Abuse Act," an outdated piece of legislation written in 1986 that says users must have "explicit authorization" from a web host before they can legally view his or her webpage. Robert David Graham describes a not-so-outlandish hypothetical situation wherein a person could get in serious trouble for accessing a "public" page:

But in our scenario, let’s say that article “31338” is a press release that is not intended to be published until tomorrow announcing the quarterly corporate earnings. While the article itself is online, a link to it won’t be posted to the home page until tomorrow, so not even Google spiders can find it. Because you’ve gotten early access, you can make a huge profit buying/selling stocks. SPEAKING OF BREAKING THE LAW... 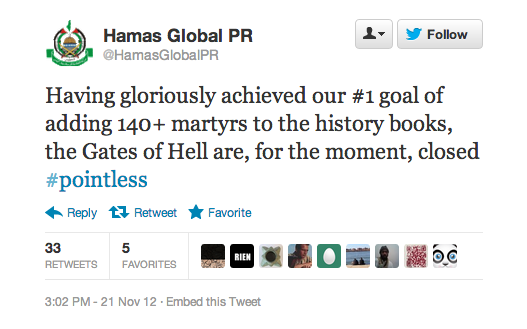 Is Twitter guilty of aiding terrorism? The Daily Beast's Peter Beinart ponders this question in response to a petition by Christians United For Israel which calls on Twitter to ban any Hamas-affiliated accounts.

Beinart writes about the slippery slope of such a petition:

But why stop at Twitter? What about Google, Facebook, or Verizon, all of which have almost certainly provided their “services,” in the form of google searches, social networking, and phone and email access, to Hamas or its members. For that matter, what about Pepsi and Coca-Cola, who have surely sold soda bottles to Hamas in the Gaza Strip? What about Exxon Mobil and Shell Oil, whose gas has very likely powered Hamas vehicles? And what about public radio and CNN, whose news services are available around the world, including in Gaza?

AND SINCE IT'S THANKSGIVING WEEKEND... 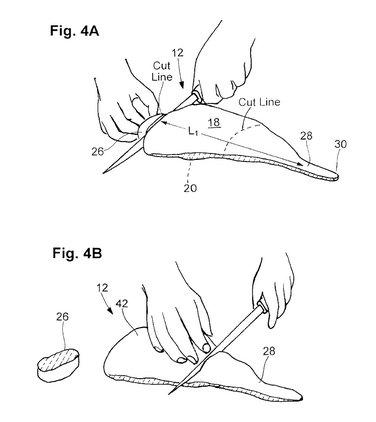 Anyone complaining that Apple's patents are frivolous (rectangles with rounded edges anyone?) should take a look at these U.S. patents uncovered by TechDirt for turkey carving methods. The patent shown above for cutting a turkey into individual steaks is on the books for the next five years, so watch out for litigious poultry enthusiasts.

Two researchers at City University London's Journalism School found that the Guardian's live blogs are getting 300 percent more views and 233 percent more visitors than conventional news articles they publish on the same topics. Now granted, the Guardian is incredibly good at liveblogging, and it would be interesting to see if these metrics stand up for other news organizations. Nevertheless, all news organizations should be aware of these stats. 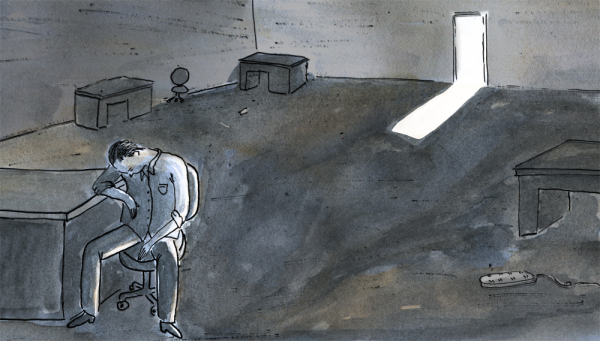 One of our Facebook subscribers called it "business poetry," and indeed, Francisco Dao's narrative of a failed CEO's last day is uncommonly beautiful for any kind of writing, let alone business writing:

It was over now. Two years of work and dreams replaced by a landing page. Even the t-shirts had been given away. He turned off the lights and lied to himself that he might have forgotten something. So he hit the switch and watched them flicker back on for one last look. For a moment he managed a smile. He remembered the note a buddy had sent him 23 months ago when they opened the office, "8 IKEA desks = $1,200, 8 Aeron chairs (used) = $4,000, Making your dreams come true = Priceless.” His smile quickly faded when he remembered his Mastercard was over the limit and past due.

Richard Nieva's analysis of Myspace and its latest gambit to reinvent itself inspired a lot of divergent opinions. Despite the fact that for the past few years Myspace has been little more than a punchline in and outside the tech world, many readers have high hopes for its plans to raise $50 million and take on Spotify. Joel Capperella wrote:

It is interesting analysis, but there could be a hidden value here that you are not considering.  Teenagers are not loyal to spotify by any means.  They simply do not want to have to hunt and search for their music, be enslaved to synchronization, nor be served up something at random.  Add this to the fact that the new myspace platform seems to offer up a deeper experience by 'following' an artist and there is, in my opinion, more than a 50/50 chance that it will stick.  The rev projections seem modest especially when coupled with specific media's ad sales engine.  Lastly it seems to me that the new design is creating more than just a listening platform  but a sort of linkedin for the creative industries.  It will be very interesting to watch. . .