Crowded by Klout, PeerReach moves from scores to fixing the mess of your Twitter stream

Twitter is a great information source, but its potential as a contextual search tool is yet to be fully realized. Part of the problem, as I have pointed out before, is that it does a lousy job of surfacing the most relevant information around a specific event within Tweet streams in real time. And yes, that’s even with hashtags, lists, and the “Discover” tab. You simply can't easily find the most relevant stuff amid the fast-moving stream.

A low-profile Dutch company that has recently closed an angel round of $310,000 is looking to address that problem with a service that combines analytics and search filters. PeerReach has used crawlers to index 50 million Twitter accounts. It quietly launched its website two weeks ago and says it wants to make the social Web more relevant. 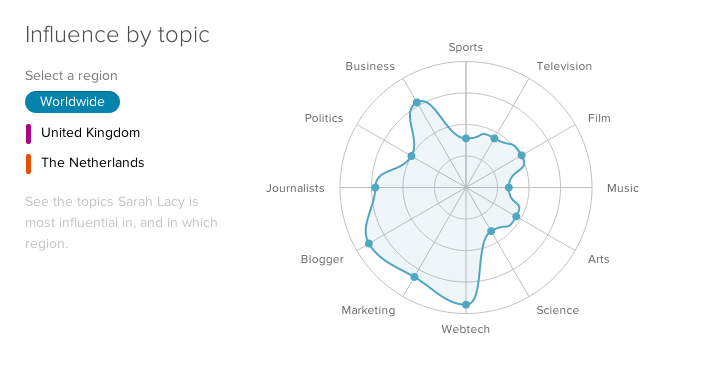 Like Klout, PeerReach analyses Twitter profiles according to follower counts, demographics, and interests, then provides a summary of their statistics. Our fearless leader @sarahcuda, for instance, is shown to have an influence in “Webtech” and Tweets mostly about the same topic, as well as venture capital, business, and journalists. Her most influential followers, according to PeerReach, are TechCrunch, Pete Cashmore, and Kevin Rose. (Side note: Sarah says she talks to none of the three, so this might not be a great reflection of the real world.)

Perhaps recognizing that no-one cares about influence ranking anymore, PeerReach will soon release a product that automatically filters search results that are relevant to whoever is signed into the service at the time. In other words, if you go to PeerReach’s search engine, you’ll be able to search for a topic – say, #Obama – and the engine will deliver you results that make the most sense for you based on your profile, as measured by influence, interests, followers, and so on. It will also offer you the ability to add further filters to the results. For example, you’ll be able to indicate at the click of a button that you only want to see Tweets from journalists or politicos, or only Tweets from males or females, or just the ones from Twitter accounts that have more than 10,000 followers.

PeerReach is less about ego and influence, in other words, and more about relevant content.

The Amsterdam-based startup was founded by Zlatan Menkovic and Nico Schoonderwoerd. Menkovic previously founded imonline.nl, a Dutch online community that at its peak had 600,000 members. After his social network had its ass kicked by Facebook, he founded a design company responsible for a mouse that looks like the Robocop of computer pointers. Schoonderwoerd, meanwhile, has a PhD in theoretical physics and specializes in Big Data. He previously started a real-estate search engine and Twirus.com, the first service to supply trending topics for Twitter in foreign languages.

PeerReach, whose angel round was led by Shanghai-based Marc van der Chijs, the co-founder of Chinese online video site Tudou, will face tough competition in the analytics and social relevance space from the likes of Topsy and FollowerWonk, as well as the likes of Klout, Kred, and PeerIndex, not to mention, on the business side, Twitter’s own analytics service.

It hopes to make money by selling its APIs to firms that want to find market insights via PeerReach’s analytics. There it might face an uphill slog competing against others, like Klout, who have deep pockets and offer their APIs to companies for free. It will also face a name-recognition challenge. Even though Klout is a kind of weird startup that has little utility for actual consumers, it has become the go-to product for brands, such as hotel chains or car rental companies, who want to know how "influential users" are.

PeerReach also has to be cautious above relying too heavily on one social network. Aware of that shortfall, however, the company plans to add Google+ and Facebook to its points of coverage soon, with more to come in the future.