Hold the conspiracy theories: The real reason why Apple is slumping

For a company at the peak of its game, Apple sure had a dismal week. The stock slumped 9 percent without any negative news, and in the midst of what could be its strongest quarter ever.

In fact, Apple's stock is down 24 percent since Sept. 21. Months after people started predicting Apple would be the first trillion-dollar company in the world, the stock's market value is having trouble holding above $500 billion. That's still a massive figure, but it's also cheap: Apple's price-earnings ratio of 12 is as low as it's been in ten years.

What happened? That question is driving a lot of speculative theories about Apple. But the reality is, sad to say, much more mundane.

On Wednesday alone, Apple's stock fell 6 percent. At first, nobody could come up with a convincing explanation. But the financial press, like nature itself, abhors a vacuum. And soon enough the market's confirmation-bias engine was running in high gear. It must be the last sentence in this otherwise bullish story on a Taiwanese web site! Or it must be this IDC report restating the obvious, that the iPad's share of the tablet market will edge down (to 50 percent from 54 percent over the course of four years)! Or that the stock was approaching the dreaded “death cross” on technical charts!

The most likely explanation was a boring one. Some stock-clearing firms were raising the loan deposits necessary to buy Apple shares on margin. That would not only decrease speculative demand for the stock, it could prompt investors to sell shares if they didn't want to pay the extra deposit. But the reason for raising the margin requirement was telling: Clearing firms had a “high concentration” of Apple shares on margin – more shares in a single stock than they were comfortable with.

And that gets to the real reason behind Apple's stock blues. Its market cap had gotten just too freaking big. Fund managers don't like having too high a percentage of their holdings in a single company, even if that company is Apple. They diversify to limit the risk of one company tumbling. Because, should Apple's stock start to drop, it has a disproportionately large effect on their fund's performance. And Apple's stock is dropping.

Funds don't even have to have bought Apple heavily for it to make up a significant portion of its total holdings. Let's say a mutual fund buys enough Apple shares to fill up 10 percent of its portfolio. If Apple's stock doubles, that figure could rise to 18 percent. Between September 2009 and July 2011, Apple's stock did double to $350 a share. And it doubled again to $700 a share between July 2011 and last September. In our theoretical portfolio, Apple would now be 31% of its holdings.

That's nice as long as Apple keeps rising, but it makes investors especially anxious if Apple's future looks uncertain, or if the stock falls. They may trim their Apple holding even if there's no tangible bad news, simply to limit their fund's exposure to future declines. Meanwhile, potential buyers may not emerge, since many other funds feel they're already stocked up on one of the world's biggest stocks.

Of course, all this could change in a single day of trading if a critical mass of investors becomes convinced there is good news ahead. Some of the remaining Apple bulls defending the stock believe this could well happen. Brian White of Topeka Capital noted stronger than average sales among Apple's suppliers, suggesting “the strongest new product ramp in the company’s history.”

Apple's stock has become a victim of the company's success, growing so large it's now a single-stock proxy for the entire consumer-tech industry. It's a longtime seller of computer hardware, but it's also created two major software platforms, both popular with developers. With iTunes, it's become one of the world's biggest media businesses. And with iCloud, it's an early player in the emerging market for cloud services. Its reach spans from mobile devices to e-commerce to digital content.

With no single sector driving Apple's success – as search ads, for example, do for Google – the issues driving Apple's stock are the ones affecting the tech industry at large. And again, all of these issues involve unresolved questions: Will talks over the fiscal cliff lead to a recession next year? What new innovations or products will generate future growth? Will increasing competition in markets like mobile devices cause profit margins to dwindle? These are questions for Apple, and for tech in general. 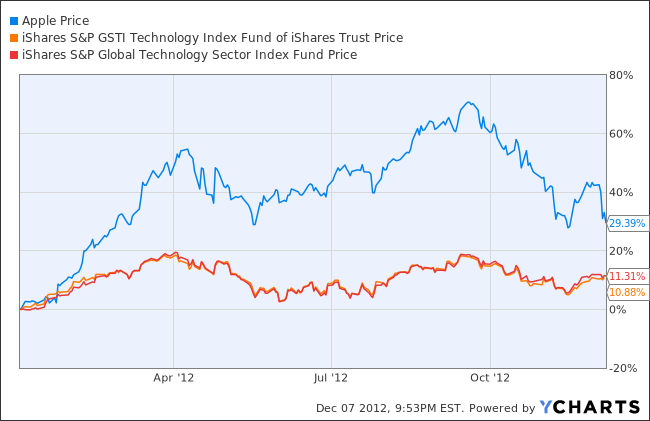 As the chart above shows, Apple's stock performance this year has resembled the trajectories of broader tech indexes. With one difference: Apple's stock rose more during the first part, and declined more in the past few months. Much of the gain was the result of the quarterly dividend Apple announced in March. Investors love a dividend party, but if Apple doesn't hand out extra party gifts, they will clear out. So far, Apple hasn't indicated whether an increased dividend is coming. In other words, more uncertainty.

Apple is still planning to buy back shares during the next three years. And it still has years of strong growth ahead. All of that is a given, yet the stock remains in a slump. It turns out the reasons for that are fairly pedestrian -- concerning technical factors like liquidity and vague specters like uncertainty, and not so much reflecting the health of its business operations.

Such matters make for boring headlines, and so we can expect silly theories about why Apple's stock is ailing. Blame it all on Apple Maps, if you must. But the reality is much more mundane.