Google and Facebook launch war against abstract patents. Good! Kill these ones first

Some of the top tech companies, including Google and Facebook, are asking the US Court of Appeals to reject lawsuits based on abstract patents. Glory be! As epitomized by the Apple vs Samsung court battle, out-of-control patent claims are perhaps the biggest existential threat to innovation today. For the ultimate primer on the topic, check out Planet Money’s investigative report on patent wars from July last year.

Ever the helpful tech blog, we’ve put together a list of absurd abstract patents, and a couple of applications, that the courts can kill first. So let’s have at it.

ComScore’s claims on the right to verify ad viewing! In August, ComScore took out a lawsuit against AdSafe, Double Verify, and Moat, claiming that it holds patents that protect its right to verify whether or not a digital ad has been seen. [Source: PandoDaily]

Apple’s email clickables! US Patent 5,946,647 says only Apple can let you click on things like phone numbers and Web links that weren’t already linked and have been sent to you in an email. Apple has sued HTC on that very issue. [Source: Engadget]

Twitter’s pull-to-refresh! US Patent application 20,100,199,180 would prevent anyone other than Twitter from being allowed to use the “pull to refresh” mechanism to update content via touchscreens. [Source: Dustin Curtis] 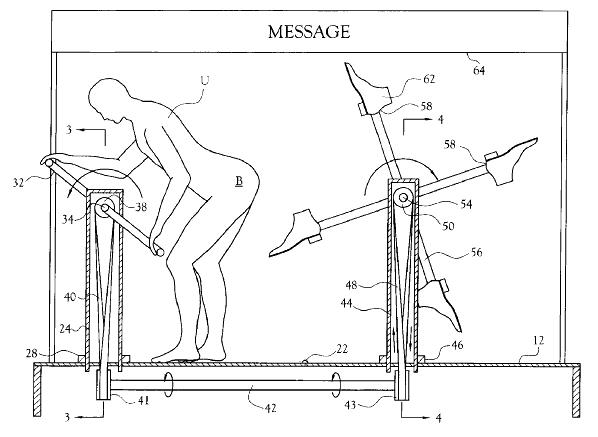 Apple’s scrolling on a touchscreen! US Patent 7,456,850 gives Apple privileged domain over the action of dragging your finger down to scroll on a touchscreen device. Or, as Apple’s patent abstract helpfully puts it: “[T]he present invention allows a user to select one or more items in the first window, move the selected item(s) to within a predetermined distance from an edge of the first window for a predetermined period of time and cause the viewable portion of the data and/or document within the first window to scroll in a corresponding direction.” Oh yeah, that's how I was going to say it. [Source: Conceivably Tech]

Apple’s switching apps while in a phone call! US Patent application 20,080,168,379. I mean, seriously, can anyone explain why Apple’s name wasn’t on the amicus brief filed to the Court of Appeals? [Source: GSM Arena]

Google’s face-to-unlock! Just in case you forgot that Google is totally guilty of coming up with ridiculous patents, too, we’ll point out here that it owns the rights to using facial recognition to unlock a smart device. US Patent 8,261,090. [Source: Cnet]

Patent troll i2z’s multiple window data display! Earlier this year, i2z tried to claim that Hipmunk has to pay it to license a patent that describes a method to display data in multiple computer windows. Hipmunk struck back by preemptively filing a lawsuit to defend its technology. [Source: GigaOm]

Helferich Patent Licensing’s text-message links! Chicago-based Helferich Patent Licensing owns US Patent 7,499,716, which describes the delivery and redemption of notifications to devices. Nearly 100 companies, including Apple and Disney, have paid HPL $750,000 for the license fee. The New York Times is now leading a legal battle against HPL. [Source: Paid Content]