BuzzFeed reeling from Oatmeal-induced nausea...just when it was getting serious

It had all the elements of a ridiculously clickable BuzzFeed feature: a rape joke, a Web humorist with an enviable fan base, red crayon, and tell-tale signs of moral hypocrisy.

To BuzzFeed contributing writer Jack Stuef, The Oatmeal, a cartoonist who has gained Internet fame thanks to his crude drawings and nerdy humor, must have seemed an attractive target. Here was a chance to take down a perhaps too-popular Internet rock star who, with an ill-advised joke that compared his F5 key to a “rape victim,” appeared to have overstepped the boundaries of common decency.

To BuzzFeed, it must have looked like surefire pageviews. The Oatmeal’s huge following – more than 340,000 Twitter disciples and counting – guaranteed high interest no matter what. A contrarian take on the humorist would be a bold move for a smart publication that had already stamped its social media-savvy credentials on the Web and was now trying to evolve into a serious journalistic force.

Instead, for Stuef, the episode turned out to be a lesson in the perils of writing a hit piece on someone more popular than you. For BuzzFeed, it would turn out to be a serious credibility blow, just at the time that the media darling was positioning itself as a refuge for quality longform reporting.

After failing to get an interview with The Oatmeal creator Matthew Inman, Stuef relied heavily on Internet research and third-party sourcing for his excoriating profile on the writer and designer, entitled “The Secrets of the Internet’s Most Beloved Viral Marketer.” Stuef criticized Inman for pandering to Reddit, for depicting himself in his comics as a fat, loser stay-at-home nerd when he is actually a fitness buff, and for misrepresenting The Oatmeal as a humble one-man operation when in fact he employs several family members and makes hundreds of thousands of dollars a year.

One woeful misstep by Stuef, however, turned a story that was generally accurate but wet with disdain into a widely mocked, discredited embarrassment for BuzzFeed. It would lead to an avalanche of acidic comments on the BuzzFeed story and a trial-by-torture on Reddit, where readers fairly questioned the veracity of the entire story. Stuef made only one factual error, but it was a howler. Not only had Inman written a tasteless joke, Stuef charged, but he was also an unfunny SEO traffic whore who happened to be an Obama-hating father.

It was that last detail – that Inman was a staunch Republican with a young daughter – that was problematic. It was gleaned from a profile published on an obscure website called Sodahead, and it was dead wrong. (Inman’s funniness, on the other hand, is up for debate.) 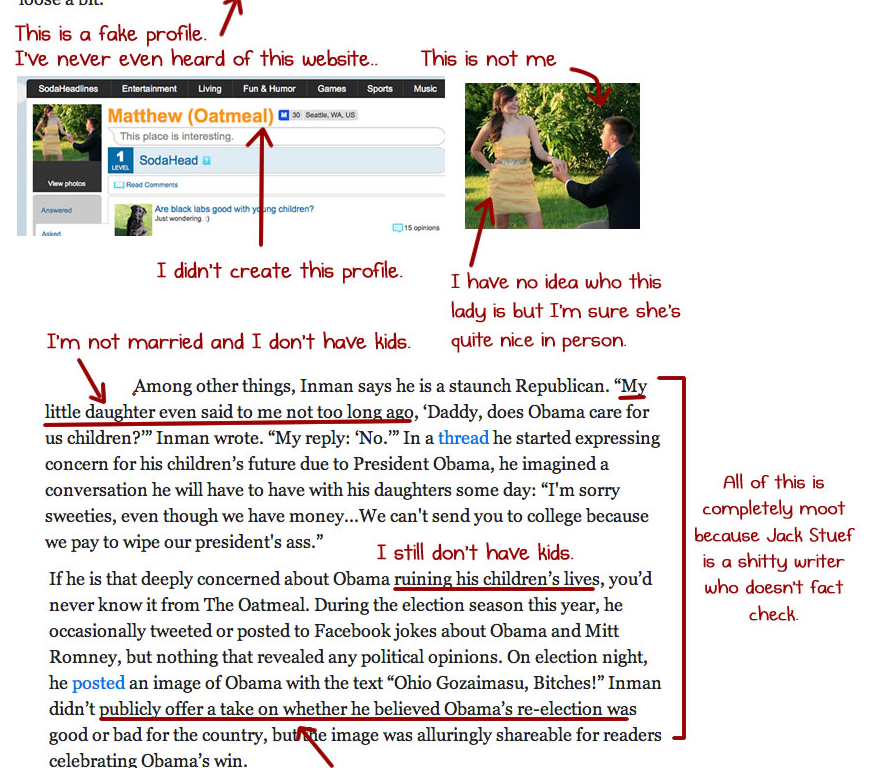 In a scathing comic response published on The Oatmeal, Inman said he had never heard of Sodahead, he doesn’t have kids, and that he had voted for Obama in both 2008 and 2012.

“Did you actually attempt to write an honest review of my work, or did you just go around the Internet looking for examples of things that reaffirm that you don’t like me very much?” Inman asked in angry, red virtual scrawl.

Inman dedicated the rest of the post to responding to what he considered borderline libelous smears against his character. He didn’t contest any other facts in the story, but he did angrily defend his own honor, at times calling Stuef a “jackass,” a “lazy journalist,” and “a bitter, uninspired, bottom-feeding ass.” He also took care to screencap Stuef’s story so he wouldn’t have to link to it and thereby reward BuzzFeed with bonus traffic.

Inman concluded his takedown with a note addressed directly to Stuef:

You point out the comics that pander but gloss over the ones that don’t. You reveal all these “secrets,” which reveal all these things I’ve been publicly saying for years to aspiring writers. You ignore the fact that 99.9% of the reason I have so many readers is because I MAKE PEOPLE LAUGH. You question the integrity of my writing, and you do it on BuzzFeed. Seriously, BUZZFEED. Then he posted a gif of a “birthday card” that Stuef had made while working for Washington DC gossip site Wonkette. The card apparently insulted Sarah Palin’s youngest child, Trig, who has Down’s syndrome. (As with Inman’s rape joke, it would be tasteless to reproduce it here.)

BuzzFeed removed the references to the incorrect biographical details drawn from the Sodahead profile and added an update at the bottom of the story that read:

A previous version of this piece linked to a profile that implied Inman was married, had children, and holds certain political beliefs. The profile is a fake. Inman refused to comment for this story, but posted an extended challenge to it on his website.

Asked for comment on the matter, BuzzFeed editor-in-chief Ben Smith said in an email response: “The original article had a serious factual error, which we corrected fully and within an hour of its publication three days ago, and which we deeply regret.”

Because the original BuzzFeed story was published four days ago and Inman’s response only went up yesterday, Smith’s comment suggests that editors discovered the error before the spat went public. In a follow-up phone call, Smith said: “No reporter wants to make a big mistake and have to print a correction,” but he declined to comment further. He wouldn’t say whether or not Stuef, a freelancer, would write for the site again. Neither Stuef nor Inman responded to emailed requests for interviews.

There is some suggestion, however, that the embarrassment runs deeper at BuzzFeed. Yesterday, BuzzFeed co-founder and CEO Jonah Peretti, who today is the subject of a warm Business Insider profile, Tweeted a series of seemingly unprompted comments that all played on the “don’t judge someone by his worst mistake” theme, including:

This is likely not the kind of attention that BuzzFeed wants so soon after trumpeting the appointment of former SPIN editor-in-chief Steve Kandell to spearhead its longform journalism project. Kandell was hired to “pioneer the project of producing high-quality narrative journalism for the social Web,” BuzzFeed said in a press release that announced the appointment last month.

BuzzFeed’s executive editor Doree Shafrir told Paid Content at the time that there’s an opportunity to do compelling longform journalism that originates online. “Right now a lot of the best long-form stuff originates in print and we’d like to change that,” she said.

At a time where there is heightened sensitivity about fact-checking and accuracy in reporting following the ever-unfurling scandal that exposed science writer Jonah Lehrer’s fabrications, BuzzFeed could have done without a howling fact error in one of its banner stories. Actually, because other online-only publications, including Tumblr, The Verge, and PandoDaily, are also trying to ramp up their longform content, it’s an error that online publishers in general could have done without.

It is, however, especially harmful for BuzzFeed, because the site is striving to distinguish itself as a serious publication while shedding its reputation as purveyor-in-chief of cat-related memes and share-bait “stories” such as “10 Faces You Make When You’re Stuck In A Bad Relationship” or “Nic Cage As Every Character In ‘The Hobbit’ Is ‘The Hobbit’ Movie We All Dreamed About.” Given those goals, this failure of fact-checking does not reflect well on the site. When Inman wrote “You question the integrity of my writing, and you do it on BuzzFeed. Seriously, BUZZFEED,” he may well have struck a raw nerve.

The idea behind BuzzFeed, as Peretti explained at PandoMonthly in September, is to capitalize on the viral effects of social sharing through the likes of Twitter, Facebook, and Reddit by creating content that is attention-grabbing and eminently spreadable. Hence the grabby headlines, photo-heavy listicles, and offbeat humor. The traffic and revenue that content brings, meanwhile, is supposed to help support the serious, but more difficult to monetize, journalism that the site publishes.

The sad thing about the Oatmeal story is that it risks drawing attention away from the fact that Buzzfeed has been producing quality journalism in abundance. Michael Hastings, most well known for reporting the Biden-bashing comments that brought down General Stanley McChrsytal, has taken his uncompromising political and war reporting to the site, exemplified in his recent piece on David Petraeus in the wake of the scandal that ended the General’s CIA career. BuzzFeed’s politics section, which features the work of McKay Coppins (formerly of Newsweek and Daily Beast), who today was named section editor, is widely respected. Already, too, BuzzFeed has posted some quality longform stories, including a history of Google Reader (“Google’s Lost Social Network”) and an in-depth look at parasomnia (“Can You Die From A Nightmare?”).

“I care a lot about the quality of the content we create,” Peretti told Business Insider. “I care about if we’re moving the conversation, and does our reporting move the conversation? I care about telling the public new information and breaking a story. I care a lot about whether we’re consistently creating content that people think is worth sharing.”

Considered in that context, this early wobble in BuzzFeed’s mission to present “serious news... with cats” (rather than the other way around) must be disconcerting. While Inman’s response was thin-skinned and disproportionate, it struck on a very real problem at the worst possible time for a site just embarking on a trip into New Yorker territory.

What perhaps stung just as much, however, is that Inman beat BuzzFeed at its own game: He won the pageview battle. The original BuzzFeed story attracted more than 70,000 views and was Tweeted about 700 times, while attracting about 3,500 Facebook Likes. Inman’s response post, on the other hand, has generated nearly 4,500 Tweets and 18,000 Likes. Two posts on Reddit – probably the biggest source of The Oatmeal’s audience – have garnered more than 5,000 combined “upvotes” and attracted more than 3,000 comments, many of which are supportive of Inman.

Meanwhile, the comments on the BuzzFeed story have been flooded with Inman supporters, many of whom have proven only too ready to sling their own bile, all of it directed at Stuef. In short order, Inman was able to invert the usual power relationship between publisher and subject by turning against Buzzfeed the very forces on which it typically relies: social media and the power of community.

No-one came out looking good from this incident, but there was one clear loser. Weirdly, it wasn’t the guy who wrote the rape joke.