Meet Easilydo: The productivity app you didn't know you were waiting for

If Easilydo were a startup focused on only one of the things it does well, then this would still be a glowing review. The fact that the app solves multiple problems in one swoop – and a few easy swipes – suggests that it has the potential to quickly become indispensable on any smartphone.

In short, Easilydo takes care of the all the inane, piddly tasks that bog you down. I’ve been using a test version for a week to run various boring aspects of my life. Right off the bat I noticed it nailed contacts. Give the app access to your Gmail and it will pull in contact information from email signatures and add it to your phone’s address book at the tap of a button. If it notices that you have someone’s details entered into your phone more than once, it will automatically merge the duplicate entries into one listing.

I've been using the contacts feature every day and have added 13 people to my address book who would otherwise have dangled in the ether. The app calculates that it has saved me 20 minutes in doing so. I believe it, and I love it for that. I need those 20 minutes.

If you give it enough permissions, Easilydo, which launches today for iPhone and is announcing $4.3 million in venture backing from Mayfield and USVP, will alert you to friends’ birthdays and let you post messages (pre-written, if that’s how you roll) to their walls direct from the app. It will track your UPS packages. It will send you meeting reminders and offer to dial you into conference calls. It will give you bill payment reminders and file your receipts into a dedicated Gmail folder. It will let you RSVP to events, add photos to contacts, view offers from your Facebook newsfeed, hug your mother, and feed your cat when you go away for the weekend. In the next update, it will solve the Series A Crunch. 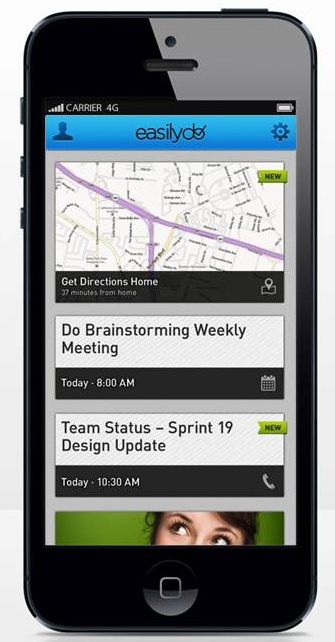 Okay, it’s possible that exactly three of those points are exaggerations. But you get the picture. Easilydo, as the name demands, will help you get things done without having to dance between various apps. It fits neatly into the Stay Disorganized trend I elucidated a few weeks ago. (Quick primer: Don’t spend time on spreadsheets, lists, folders, and filters – apps are increasingly able to do all that for us, and on a very personalized level.)

The Mountain View company's co-founder and CEO Mikael Berner says the app is all about making our lives easier. “The one thing we’re trying to focus on for the consumer is saving them time and making them more efficient by doing things for them,” he says. The app isn’t supposed to be an uber app that does everything other apps already do; it’s just meant to help us better manage the things we care about, he says. “We try to pick up the things that fall between the cracks of other apps.”

Berner was the founder of BeVocal, a company that specialized in automated customer self-service through speech-recognition systems. In 2007, it was acquired by speech recognition company Nuance, maker of the Dragon auto-transcription software. Berner’s cofounder, Hetal Pandya, was previously a director at Nuance, where the two worked together before starting Easilydo in January last year. At Nuance, Berner was in charge of automating customer service and making it as intuitive as possible: How do you make it easy for customers to pay a bill, check a balance, or find out why their service got cut off?

Soon enough, Berner got the idea to expand that approach to consumers in general and deploy it via a smartphone app. He was not naive about the technological challenge it would entail. While at BeVocal, he was responsible for overseeing the development of interactive voice response systems for Wells Fargo and AT&T. Still, the project turned out to be “at least three or four times” harder than he had anticipated.

Today, the app handles 24 tasks. To manage that, it required substantial architecture innovations. He and his team of nearly 20 engineers – half of which are based in China – spent six months working on that. Essentially, the architecture works in a way that lets Easilydo create triggers for the discovery of specific tasks, which are then glued together. The structure goes: “When X happens, offer to do Y, or always do Y.” For the time being, Berner thinks, the design has reached its limit in terms of the number of tasks it can offer without overwhelming the user experience, but there is an opportunity for third-party developers to build on the platform. His list of tasks that could be added to the app runs to about 100 items.

The startup plans to make money by taking a cut of transactions performed via the app – hotel bookings, say, or gift cards purchased – and by offering a paid version of the product that comes with premium features. Ads won’t have a role, even though the app is free. “We’re very serious about saving the user’s time, and if we started to advertise things, that would go against that principle,” says Berner.

For the future, Berner envisages a distributed “Do It” button, which would behave much like Facebook’s “Like” button. It could be embedded on third-party sites and tied to specific tasks that the app could perform. For instance, if you were visiting Amazon.com and you had “buy Mom a gift” on your to-do list, Easilydo could suggest a gift that you could purchase from within the page. You would click “Do It” and it would be done.

Easilydo’s most obvious competitor is Google Now, which also provides users with personalized prompts and information. But Google Now stops at "find and deliver," whereas Easilydo is very focused on execution. “We don’t want to be a task management company,” says Berner. “We want to be a company that can help do things for you.”

The startup will face other challenges. To be truly useful, it needs users to hand over a lot of permissions: to Facebook and Google accounts, LinkedIn, and Twitter. Many users may balk at the privacy implications of that.

Interacting with friends through the app could also throw up awkward situations. Whenever you post a message to someone’s wall using the app, the note carries a message saying it has been sent from EasilyDo (a Facebook requirement). It also offers pre-written messages. The branded auto-messages could well cheapen the social act of saying “happy birthday” or, as Easilydo suggested I write on the wall of a friend who was mourning the death of Ravi Shankar, “Sorry to hear this news!”. You thought Facebook demeaned empathetic acts of acknowledgement? Welcome to the next level, baby.

Of course, you could always just edit the message before posting it, or – crazier yet – switch to the device's calling function and speak to your friend over the phone.

Despite the potential drawbacks, however, Easilydo has found early favor in Canada, its test market. There it has seen 20,000 downloads, resulting in an App Store rating of 5 stars from 78 reviews. For this writer, that spells "homescreen material."