More power to the pen: Ganxy delivers bundles of joy to authors

The emerging age of premium micropublishing is not limited to magazines. Tools for publishing and promoting one’s own words while skipping traditional publishers are also on the rise in the world of ebooks. Among the players vying for attention in the space is an under-the-radar startup called Ganxy. Today, the New York-based company is rolling out a feature that lets authors sell their books online in bundles.

Ganxy’s main product is an embeddable “showcase” that displays a book’s sales information – including cover art, promotional blurb, rich media, and “buy” buttons – within a drag-and-drop template. The Ganxy-hosted showcase – here’s an example for Mark Cuban’s “How to Win at the Sport of Business” – can be hosted on a website or dropped into a Facebook page, posted to a third-party blog, or the like. While Ganxy is primarily focused on ebooks, it also caters to music, as seen in this showcase for a John Lennon tribute album. 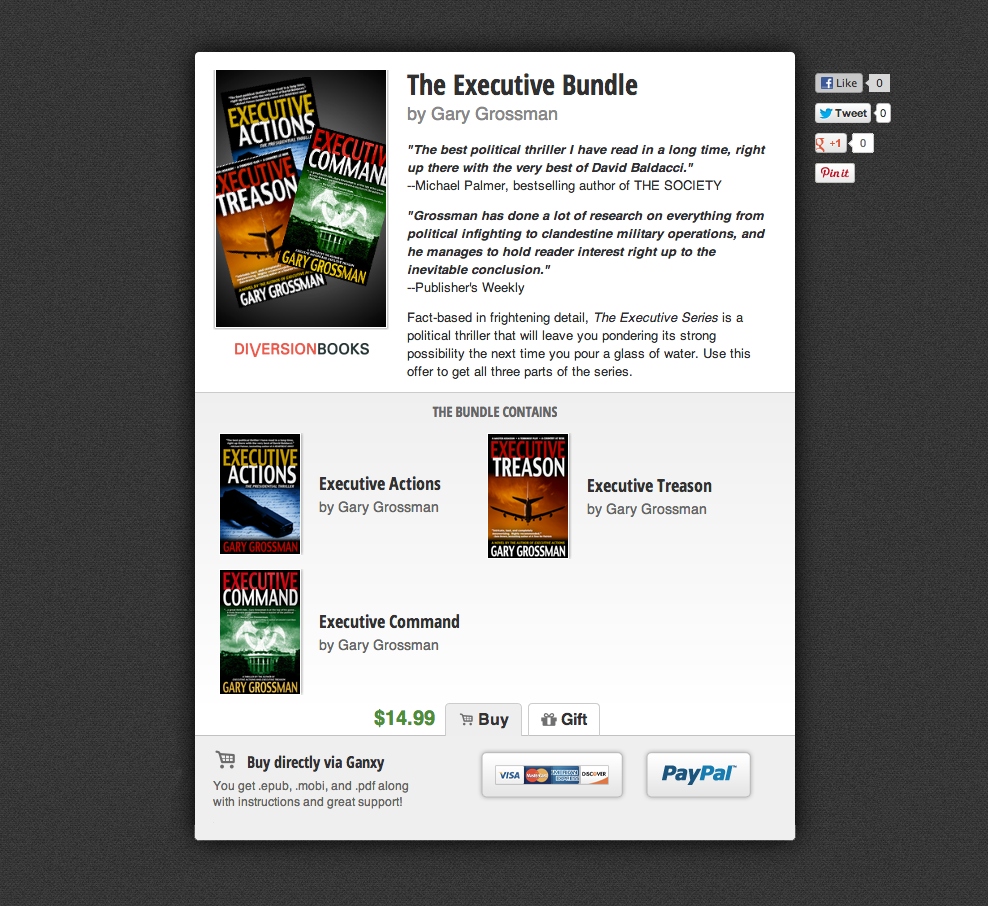 Authors can sell their ebooks through major online retailers – Amazon, Apple, Barnes & Noble, Walmart, Target, Books-A-Million – and through Ganxy itself. The benefit of selling through Ganxy’s ecommerce platform is that the authors get to keep 90 percent of the proceeds. Now that Ganxy offers bundling, they also have the opportunity to expand their income opportunities beyond what is provided by the big retailers.

Apple, Amazon, and Barnes & Noble offer a workaround for selling multiple ebooks in which an author merges multiple files into one and essentially creates an uber-volume. But that option doesn’t offer the flexibility of the Ganxy bundle. With Ganxy, the seller can set up a bundle in minutes, offer flash sales, change the price in real time, and easily add or remove content. It’s all in keeping with Ganxy’s idea of giving content owners more flexibility over how they sell and promote their products.

Tools like Ganxy and Storybundle are making it easier and cheaper – free, basically – for writers to self-promote their work. Ganxy takes just a 10 percent cut on direct sales. Used in conjunction with tools like PressBooks, which offers a publishing platform built on WordPress, they also significantly lower the barrier for people who want to make money from their work. As Marco Arment, founder of Instapaper and creator of The Magazine, has pointed out, that might not be a great thing. A flood of subpar content on the market could compromise the value of the micropublishing ecosystem. Lord knows there’s enough self-published crap on Amazon as it is.

On the other hand, these tools open up interesting opportunities for established writers to publish and distribute work that traditional publishers might have deemed commercially unappealing. New York Times writer Mark Oppenheimer provided an example of that in October when he published an ebook about Dan Savage, using PressBooks and Ganxy. In an age of shrinking marketing budgets, when publishers increasingly expect writers to do a lot of their own promotional work, such tools also present a useful way to establish an online presence and sales channel, while also tapping into social media.