You spend most of your life listening to music through shitty headphones. If you’re lucky, you can afford to pay for a decent pair – something like the Parrot Zik headphones, which will give you noise cancellation, bluetooth controls, a wireless experience, and a $400 hole in your pocket. The sound quality will be great, but it’ll still be apparent that you’re listening via wires that feed into your ears.

No matter how hard Carla Bruni pouts in an ad for your headphones, they aren’t going to make your music sound like it would if you were sitting in your living room listening to it pump through some quality speakers. With headphones, you miss the subtle variations and resonances that you get in a room, where the sound bounces off objects and fills the space. Unless, that is, they’re playing through a free app cooked up by a team of scientists at the University of California, Davis. Today, that app, Rondo, is available to the public for the first time, and I can tell you: you’re going to love it. (You can download the app here; but also be aware that if you search for "Rondo" in the App Store, there's another app of the same name that is not the player you're looking for. Be sure to download "Rondo Player.")

The Valley meme, in case you haven’t been watching reality shows on Bravo recently, is that entrepreneurs are young and funky, all pep and pride, ready to change the world from a Y Combinator-supported basement. But sometimes they’re not. In the case of Dysonics, they most certainly are not.

The people of Dysonics are, in fact, a group of grey-haired scientists who have been developing their patented audio technology for 15 years. They started their company with $750,000 in funding from Rawah Partners and angel investors, having graduated from an incubator at UC Davis called the Engineering Translational Technology Center (ETTC). The company holds three patents in audio engineering.

So what does Rondo do? By listening to your music through the app, which automatically syncs with iTunes while not taking up any more space in your iPhone’s memory, you can get a “3D” audio experience. The music sounds rich and deep, as if you are listening to it from the couch in your living room with a bourbon in hand. I’ve tried the app with both music and an amateurish podcast, listening through my iPhone’s earbuds. It transformed thin and tinny audio into a layered and “deep” sound. After a few minutes, I forgot I was wearing the ear buds at all. It was as if the sound were seeping into my audio field through the stretched skin on the flappiest part of my ears.

Given that the guys at the company have been working on the technology for 15 years, it might seem strange that they’re only now finding a way to come to market. But for Dysonics to reach this point, a few things had to happen. First, headphones needed to become almost ubiquitous. That was achieved when smartphones went mainstream. Then motion sensing had to become widespread and affordable. Thanks to accelerometers in iPhones, that happened too. Finally, because half the technology is algorithms, it needed a platform. Once again, send your bouquets to the people at 1 Infinite Loop, Cupertino.

The last big tech innovation in headphones was noise cancellation, says Robert Dalton Jr, co-founder and CTO of Dysonics, and the youngest of the grey-hairs. Dalton’s company wanted to push headphone quality experience further. “We want to give you the same experience over headphones that you can get listening to your speaker system,” he says. 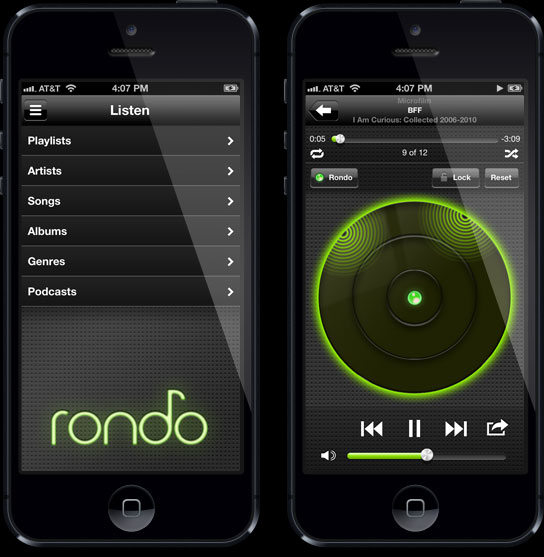 Dalton compares the way the technology works to Google’s Street View. Just as Street View takes a panoramic photograph and produces a three-dimensional effect by “stitching” photos together, Dysonics pieces chunks of sound together bit by bit.

This is where the motion sensing comes in. It’s important, because if the software doesn’t respond to motion during the model-recording process, the sound quickly loses its realism. By responding to motion, the tech can convince your brain that the sounds it is hearing are outside of your head. Take that, brain!

To capture the full “room” effect as realistically as possible, the company puts its recording hardware in the middle of a model room, then records in 360 degrees. It’s also similar to the immersive 3D video technology that allows viewers to watch the footage later and choose whatever angles they want. Former Guns N’ Roses guitarist Slash recently released a single on Facebook using such 360-degree video tech. Important news: You can now watch Slash’s glorious hair from every angle imaginable.

“We can record a band and make it sound like there’s music all the way around you,” says Dalton. And in that fact, the company spies opportunity. It sees potential for the development of a new audio format – like .mp3 or .wav – that is totally optimized for headphones. But that's a ways down the track.

In the meantime, the Rondo app offers three “ring” settings from which you can choose your audio preference. By tapping the innermost ring, you get a sound experience that makes it seem as if you are listening to a song from inside a very small room (like, you know, the bathroom). The middle ring provides the sound you might get in a moderate-sized space such as a living room. And the outermost ring replicates the experience of listening to a song in a concert hall.

Dalton says Rondo is just the first release in what could be a range of applications for the technology. One could imagine that the company might well be thinking of building its own headphones, too, so that it’s not reliant on any one software platform. That would put it squarely into competition against the likes of Skull Candy and Dr Dre’s Beats.

So far, Rondo integrates only with the iPhone’s in-built music player, via iTunes – that means no Spotify, Rdio, or MOG, for now – but Dalton says it will soon come to other platforms and work with other services. The app will be free for a limited time, with a price tag likely to be attached in 2013. As well as revenue from app sales, the company plans to make money by working with other companies who might want the software, and perhaps by expanding beyond software altogether.

On a personal note, I hope Spotify is top of Dysonics' "to be added" list. Because I don't use iTunes, I've had to revert to a non-Rondo experience for listening to my music. Now, alas, all my tunes sounds like a cheap imitation of the real thing.

How strange it is that the "real thing" turns out to be a simulation.