The three guys from Connecticut who built a paid voice-translation app that is about to hit 1 million downloads have created a new "tabletop" product for the iPad. And their message to investors: We still don't want your money.

SayHi Translate's just-released TableTop Translator is designed to sit on a table between two people and translate whatever they say to each other in their different languages. The app, which is on sale for $2.99 but will go up to $5 after Christmas, is available in 40 languages. 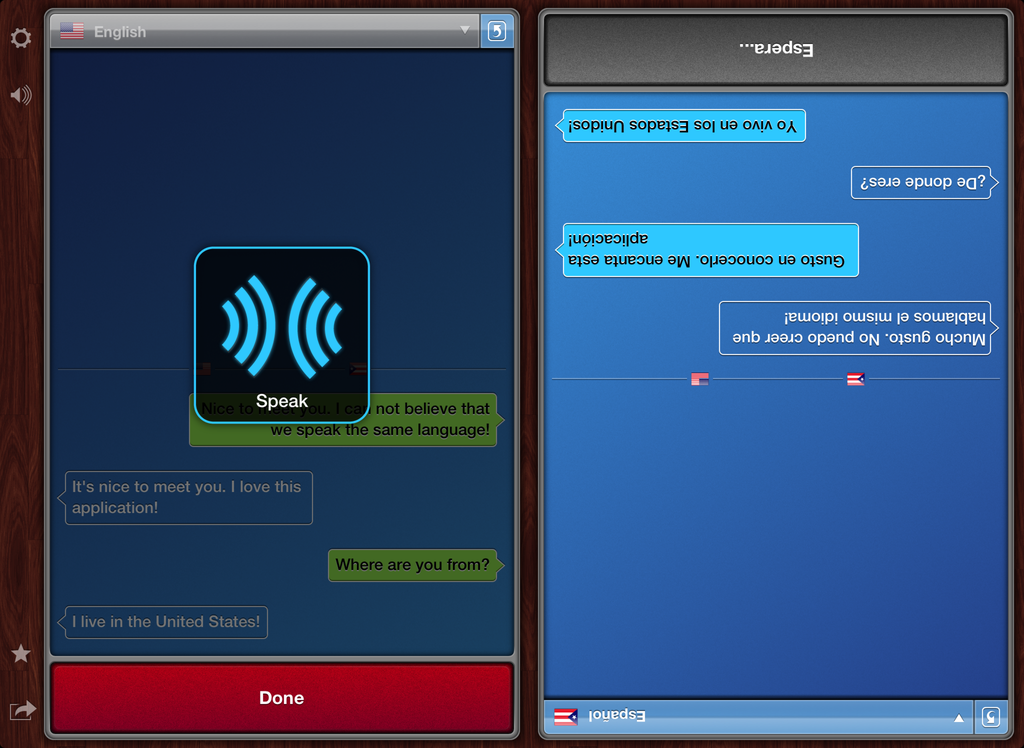 While the SayHi iPhone app (99 cents until Christmas, $2.99 thereafter) is useful for learning or communicating phrases and sentences, the TableTop Translator is likely to be more useful for long conversations. The translation interface is split into two parts that are flippable, so each part of the app can face the people on either side of the table. If you've ever had a drink with foreigners in a bar who don't speak your language, you'll know just how much potential this has.

It's been quite a year for SayHi Translate. Back in May, the app shot to number three in the paid rankings in the App Store, sparked by positive coverage on numerous blogs, including Lifehacker and Gizmodo. Since then, an iPad version of the app featured on the Today show, sending it to number one place in overall paid iPad apps, much to the startup's surprise.

"Traditional media still has legs," says SayHi CEO Lee Bossio. "Even with no links, viewers of that program just downloaded it like crazy." Since then, without a dime spent on promotion, SayHi's iPad app has been a permanent fixture in the Top 200 Paid category.

Despite the success of SayHi, Bossio says he and his two co-founders – you know, the entire team – wanted to launch a table-top version so people could face each other instead of a device. (For a look at the new app in action, see Bossio's demo video.)

The guys, who have bootstrapped the operation and work from their apartments, have fended off strong investor interest, including from venture capitalists, who still check in with the team from time to time. Bossio says he's glad they've resisted the temptation to take funding.

"We've created a new bespoke iPad app and made SayHi Translate even better, all based on our users," he says. "That's what is making us money, not the direction of investors."

Taking investment is a life-altering decision, he says, and while it might be sexy to do it and get featured on tech blogs for doing so, the SayHi guys are happy to just focus on their users. "We still want complete control over our decisions," says Bossio. "We love building our apps for our customers, on our own time."

Meanwhile, Bossio says he is unconcerned about the advent of Google Now, an Android-based service that has a translation function that doesn't require users to open an app. He points out that while Google Now is great for casual use, it is not yet available on all Android devices, and SayHi was already able to rise to the top of the App Store even while competing against Google Translate, which is free on iOS.

In the meantime, SayHi Translate and the TableTop Translator will continue to compete against Vocre and iTranslate Voice, and it is pouring a lot of effort in developing apps for Android. Bossio says he expects SayHi's translation apps to hit 1 million downloads early in the new year.