How to tell the difference between a social media maven, a ninja, and a guru

Social media can be a beautiful thing. It can bring people together in times of crisis. It can be a self-regulating "truth machine" during breaking news events, and as a delivery system for wit and humor, it's without rival in the modern era.

But for every @acarvin and @robdelaney who prove the value of social networking every day, there are literally thousands of snake oil salesmen who threaten to ruin it for everybody. They are the "social media ninjas," the "social media gurus" and the "social media evangelists." Francisco Dao simply calls them "smankers." And according to a study by FollowerWonk shared by Ad Age, there are 181,000 of them on Twitter which honestly sounds a low estimate.

But how do you tell the difference between a "ninja" and a "guru"? A "maven" and a "marketing expert"? For that, we've created a helpful guide so you can hire the social media bullshit artist that best fits your company's needs:

Formerly known as an "SEO guru," the social media guru changed his name in 2010 after reading on a fortune cookie that "social media is the new search." Has never actually used social media.

Has cancelled his email account and now communicates solely via Snapchat sext. There is a 50/50 chance you've seen his genitalia on Chatroulette.

Malcolm Gladwell is the maven's spirit animal, hence the name he adopted after finding a discarded copy of "The Tipping Point" at Starbucks. Doesn't realize Malcolm Gladwell hates social media.

Used to be big on Hot or Not. Actual prostitutes wish he would stop calling himself that. 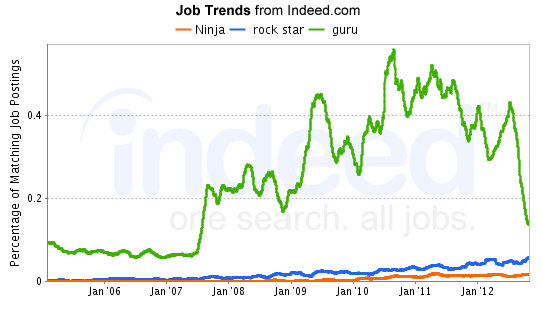