Among the growing number of ways with which publishers are experimenting to make money is in-image advertising. Just as Google's AdSense matches ads to text-based searches, in-image advertising – or visual commerce – contextually links items displayed within images to relevant products on shopping sites. Want that watch Angelina Jolie is wearing in that red-carpet picture? With visual commerce, you could get it by clicking on an in-picture icon that links to a shopping site.

Helsinki, Finland-based Kiosked is one of the major startups doing this, and it has just forged a partnership with Getty Images that will automatically monetize images published on the websites of participating publications.

Kiosked’s technology indexes an image, looks at the metadata provided by Getty, and matches the products shown within the picture to links on ecommerce sites. Effectively, the technology converts the images into dynamic storefronts, which are automatically localized for every market.

Getty is licensing to Kiosked its PicScout image identification platform, which scours the Web to identify instances in which the agency’s content is used. That way, the publishers don’t have to do any of the image tagging themselves – they need only to sign up for a Kiosked account. 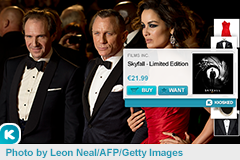 An example of Kiosked in action.

Kiosked cofounder Antti Pasila compares the technology to a visual version of Google’s AdSense in the way that it contextually matches commerce to content. Publishers only need to install a small script onto their sites, just as they would for a banner ad, and then that script will go through the Web page, recognize what components are images, identify the content owner, check if it is licensed to Getty, and then fetch keywords and metadata in order to enable to match product links to parts of the image in real-time. To make the matches, Kiosked draws on its library of tens of millions of products.

In the first phase of Kiosked’s pilot program for publishers, 10 mid-sized magazines in fashion, entertainment, and sports in the US, the UK, and the Nordics will use the technolgy to automatically tag products displayed within images sourced from Getty. For example, a photo of Tiger Woods on the golf course might be tagged with links to Nike’s store, pointing out where to buy the shoes he’s wearing, or linking to his biography that’s for sale on Amazon. Every time a sale is made, the publisher takes more than 50 percent of the affiliate payment fee – which typically falls somewhere between 4 percent and 8 percent of the sale – while Getty and Kiosked split the remainder. None of the magazines has agreed to say publicly that it is testing the product.

The partnership doesn’t mean all images on your favorite news sites will soon be plagued with little “K” logos that denote product links, however. “Our system wants to have really good matches for the products,” says Pasila, “so if we don’t get an extremely good match, we don’t want to show everything.” The links show up only when a reader mouses over the image, or when he taps on it on a touchscreen device.

Christian Toksvig, Getty’s vice president for business development, says the arrangement is significant because it’s one of the first times the company has licensed its meta data with the intent of fostering ecommerce, rather than selling licenses to actual content. The agency has a similar partnership with Kiosked competitor Luminate. It’s likely we haven’t seen the last of such deals. “We certainly hope that there will be more of the same type,” says Toksvig.

Partnerships with the likes of Kiosked and Luminate could one day provide a way for Getty to make money from images that are used on blogs and websites that haven't paid for the license. That could help get around the problem of people posting Getty’s images to Pinterest, for instance, without having paid for the privilege. “We just want to create business models that enable publishers to monetize that content and to bring some of that back to us and to the owners of those images,” says Toksvig.

Kiosked, which is backed by $5.75 million in funding, much of which comes from Rovio chairman Kaj Hed, won’t only have to contend with other startups in this visual commerce realm. Larger companies are also eyeing up a piece of the pie. Pinterest, for instance, will be a major competitor when it inevitably decides to switch on its affiliate marketing model, and Google and Amazon are well placed to compete on similar grounds, as well as on the performance-based marketing and lead generation fronts.

Meanwhile, Kiosked might find that publishers take a lot of convincing to adopt the technology. Many still have bad memories of the keyword advertising provided by the likes of IntelliTXT that sullies Web pages with unsightly double-underlined words that lead to advertisements. On the face of it, Kiosked's technology is less intrusive because it at least only displays its links when a user takes action on a picture, but there's a fair chance readers will react negatively when they unknowingly scroll over a picture and the link icons suddenly clutter up the experience.

Meanwhile, while Kiosked has limited operations in the London and Moscow, most of the 50-person team is based permanently in Helsinki. Securing partnerships with the world's top brands and publishers will be a tough ask from that vantage point, which is not exactly a hotbed of the media or ecommerce worlds. However, Kiosked already works with retailers such as Angry Birds, DreamWorks, Uniqlo, and Agent Provocateur.

As we discussed in a recent story about Brian Lam's gadget site The Wirecutter, the affiliate marketing model is poised to make something of a comeback as consumers get more and more used to shopping from their tablets, and as publishers embrace alternatives to display ads, which are notoriously ineffective and getting cheaper by the day. And tying the affiliate approach to photos rather than display ads and text links provides yet another alluring possibility in the ongoing experiment of monetizing digital publishing. How successful might it be? Well, it's too early for that yet. As with many of these new publishing monetizing models – from micropayments to "leaky meters" – the answer for now is "We'll get back to you."