Young people are screwed... Here’s how to survive

Hey kids, you’ve all read "The Hunger Games," right? Almost all young people have read the best-selling books or seen the Hollywood movie about Katniss Everdeen, a smart and ambitious young lady whose life prospects are diminished by historical events that predate her. What little hope she has is seemingly reduced to nil when a bunch of old people drop her into an arena and force her to fight with her fellow children in a battle royale to the death.

But that’s just fiction, right? Your loving parents and grandparents would never screw up their world and then throw you kids under the bus...or would they?

Actually, they already have.

Last week, the economics blog Calculated Risk ran a chart that tells a pretty compelling story. To an economist, this chart means that the magnitude and duration of the 2007 recession’s impact on unemployment outpaces that of any prior post-war recession. To young people, it simply means this...

You kids are screwed.

In fact, teenagers today probably aren’t old enough to remember the “Dot Bomb” recession of twelve years ago. But even at its peak, that really bad recession did not reach a level of unemployment that matched the one we are still currently experiencing. With the Federal Reserve losing its appetite for quantitative easing, the last bullet in their holster, and both political parties deciding to half-ass the fiscal policy debate, it’s safe to say that...

You kids are really screwed.

As mentioned in one of my recent articles, unemployment for young people is about double the national average. Student debt is now the single largest contributor to the nation’s credit delinquencies. And it’s one of the few debts that you can never expunge through bankruptcy. Stated differently...

You kids are so damn screwed.

Finally, young people need to understand how much their grandparents’ generation has ruined things for them. The average American retires with less than $70,000 in savings, but an elderly man and woman receive about $275,000 in medical care during that time — and you kids are paying for it by inheriting trillions upon trillions in Medicare bills that granny and grandpa never intended to pay and will be too dead to worry about soon. And you California kids can thank them for passing Proposition 13 and Proposition 30, which relieved them of having to pay taxes in favor of you having to pay even more taxes. In other words...

You kids are beyond screwed.

But there’s some good news in all of this. Some of us have already been through this "Hunger Games" melee, and we can serve as your Haymitch Abernathy — you know, the drunk, ranting mentor who teaches Katniss how to survive the great battle that awaits her.

So here are a few pieces of advice for how to navigate this terrifying world:

Lesson No. 1: In 2007, the first thing to go was the bullshit. So you better learn how to make something. 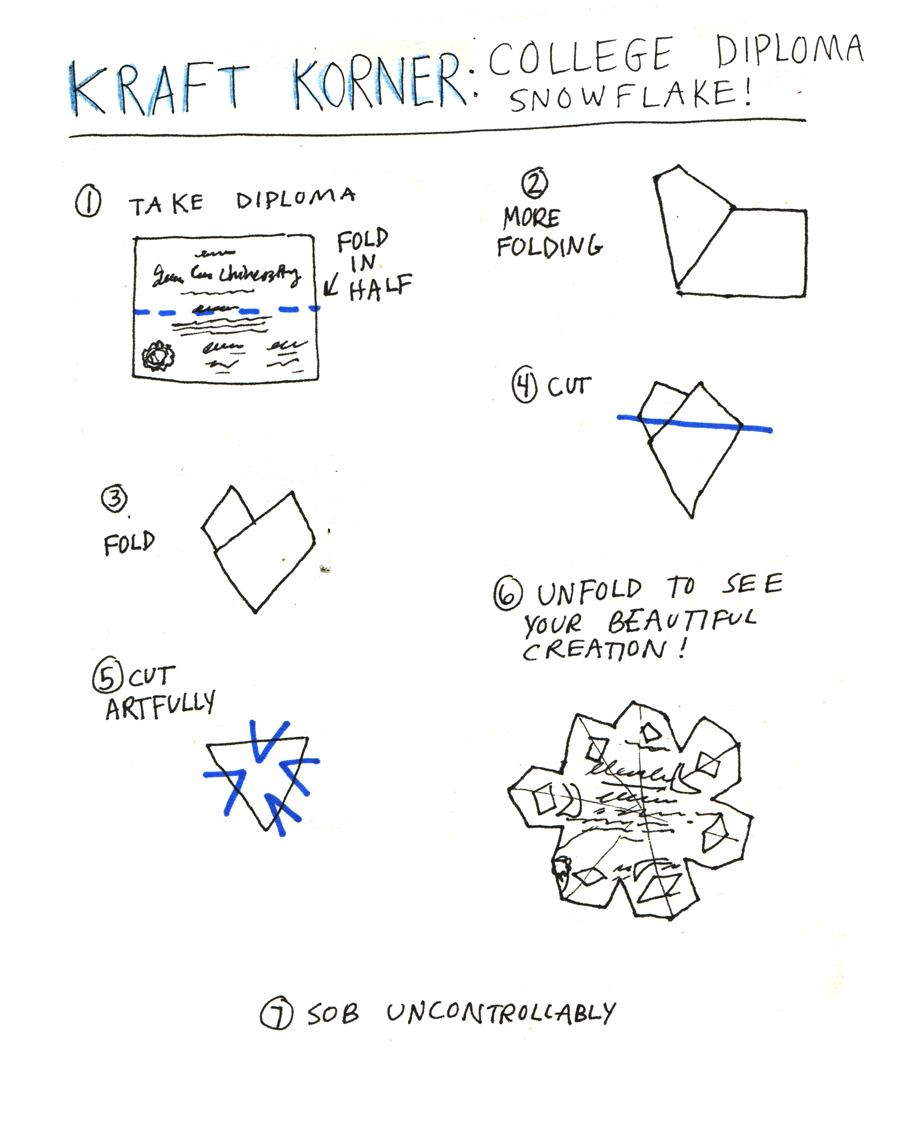 There’s a reason why unemployment is still very high, even though corporations are making record profits. It’s because after they were forced to cut about 10 percent of their workforces, many of them realized that, well, they never needed that many people to begin with.

Companies cut out the bullshit. And, unfortunately, many of the cerebral jobs that were going to ambitious young people were right in the thick of it. This included young lawyers, who pretty much can’t get jobs right now. This included young people in marketing and finance, two departments that do not bring in revenue or keep the factories running.

But guess what isn’t bullshit… making things. There are millions of unfilled jobs in America, and most of them are careers where you actually have to make and build stuff. If you grew up in an affluent environment, then you see your software engineer friends getting jobs easily. But it’s not just them. There are countless labor jobs — everything from HVAC to plumbing — that still pay big dollars. But rich kids don’t even know what those jobs entail.

My advice to young people is to figure out how to make something. That means either working with your hands, or learning how to type code with them.

Which brings me to the next lesson...

Lesson No. 2: No, education is not the answer.

If you can get into an ultra-top-tier college, then go ahead and do it. An Ivy League degree is worth getting, at least for undergrad. The value of a law or business degree is becoming more and more questionable each year.

But for the rest of you, it may be worth skipping college altogether.

The world doesn’t need any more girls with Spanish degrees from California State, Long Beach. Sorry, but it just doesn’t. We need you gals to learn how to build software in equal number with your male peers. They are no smarter than you, and they are definitely way less organized and far less attentive to detail. So go show them what you are made of.

But won’t a college degree pay for itself? It probably won’t. According to UC Berkeley’s website, a four year education will cost you $210,000 in tuition and living expenses, and a private education could run you way more. A part-time job at Starbucks will eat into very little of that sum, and you will be forgoing a real job during that same time. And — if I can convey just one point in this whole article, let it be this...saving money takes forever. Even if you do get that coveted six-figure job, you will find that it takes forever to save $210,000. Decades even.

Buy a few O’Reilly books — it will run you about 60 bucks. Go find a few software engineer friends and ask them to help you. Nerds are friendly and altruistic. And software code is no more boring and no more cryptic than learning how to conjugate your Spanish gerunds. Who knows, you may even have what it takes to start a company, but even if you don’t, you can get some valuable equity along the way.

Lesson No. 3: Your parents and grandparents don’t understand your world. You should probably ignore them. 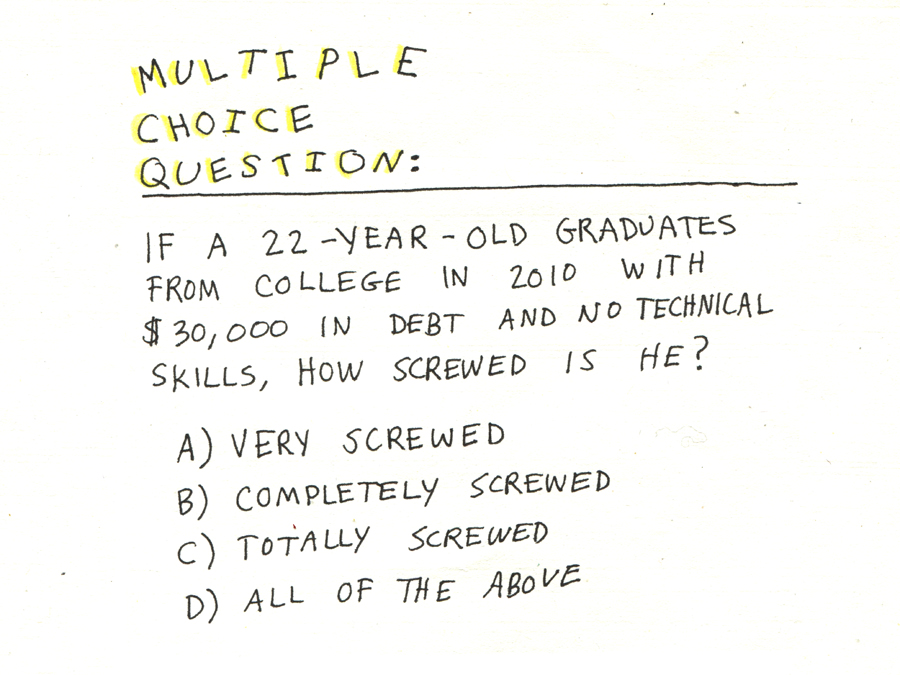 Your parents and grandparents want what is best for you. But they do not understand your world in the slightest. You should probably ignore them.

They grew up in a world so unbelievably different from your own, that they couldn’t possibly understand what things are like for you. They don’t know what it is like to fight hard for an unpaid internship. They don’t know what it’s like to watch entire career paths suddenly disappear or become far less desirable: like Journalism, Medicine, and Law. In their day, getting a job in Medicine or Law was a ticket to prosperity. And newspapers actually hired people.

Parents and grandparents don’t understand the extent to which careers need to evolve in the modern day. No longer can you get a job at some company and expect to stay there for three decades. What you do for a living may not even exist in ten years.

Every young person is an entrepreneur now, in one way or another — they must forge their own unique career path, and they need to think five or 10 years ahead. There is no rulebook anymore for how to build a career. Certainly not the one your parents read in 1981.

In summary, the “conventional path” has become so narrow, that it hardly even exists. You can’t just go to grad school and "become" anything: a lawyer, a banker, a doctor, a journalist, a manager. Some of these jobs are on hiring freezes, and some of them are so fraught with frustration that they are best avoided. I don’t know a single doctor who thinks that Medicine is the best career path for their kids. And the same logic is applying to more and more professions. The well has been poisoned.

If you have successful friends, you will be successful. It’s pretty much that simple. If you hang out with a bunch of losers, you too will adopt their loser ways and not achieve anything. Regardless of whether or not you go out and network, please make sure that your friends are ambitious and hard working people who you admire.

But if you hang out with quality people, you won’t need to worry about networking. Your friends will be your network. The only reason you are reading this article is because Sarah Lacy has a lot of friends who are very high quality, and they not only supported her PandoDaily ambition, but also put money into it. And even though she is nobody, she does have quality friends.

It works. I’ve seen it work innumerable times. Your friends bring you up or pull you down. There’s no in-between. Make sure they are pulling you up.