In 2003, Ziv Navoth sat down and wrote a short story. The next day, he wrote another. And then the next. He repeated the pattern for about another 180 days, until he reached the point when he was ready to publish a book of them. Aside from getting his stories published in magazines, that was about the only way he could hope to get them in front of readers.

In 2007, when that book, “Nanotales,” came out, his PR firm tried to get it good placement in book stores. The rules of the bookseller world, however, are that you have to pay for the best spots by the window or on the feature tables within these stores. No problem. Navoth was willing to do that. But when his PR people took an offer to one of the UK’s biggest book stores, Waterstones, the retailer turned them down. Waterstones didn’t want their money. The reason? People just don’t buy short-story books.

And so was planted the seed for Paragraph Shorts, a free iPad publication launched today that features a selection of shareable short stories.

At the time of the release of “Nanotales,” Navoth had just joined Bebo as vice president of marketing and business development. The social network had launched an initiative called Bebo Authors, which coincided with a short story competition. Within three days, Bebo received about 3,000 submissions. Navoth realized that there were clearly a lot of great short stories, and they still formed an important role as a means of expression. So he came to wonder if the Waterstones rejection was more a function of the shortcomings of a book as a means of distribution more than anything else. After all, short stories had been packaged that way since the invention of the printing press. Given that about 570 years had passed since that time, it was probably a reasonable idea to rethink that model.

Paragraph Shorts does for short stories what Flipboard does for news, but on a smaller, more manageable scale and with a human hand guiding the curation. Every week, it will publish seven stories, give or take one or two, blending text, audio, and video, and presenting the tales in a richly designed format. The periodical will feature the works of great authors such as John Cheever, Flannery O’Connor, and Jonathan Franzen, alongside newer voices such as Etgar Keret, Chimamanda Ngozi Adichie, and April Ayers Lawson. Sometimes, the app will also feature music. Upon opening the first issue of Paragraph Shorts, you’re greeted with a song by High Highs.

Paragraph Shorts won’t be accepting pitches from authors, and is instead choosing to focus on work that has already been published in the likes of the Paris Review, the New Yorker, Esquire, and through video sites like The Moth and TED. In the cases where Paragraph has an agreement with the publisher – such as it does with the Paris Review – it publishes the story in a format that’s native to the app and includes a subscription ad to the original publication at the bottom of the story. 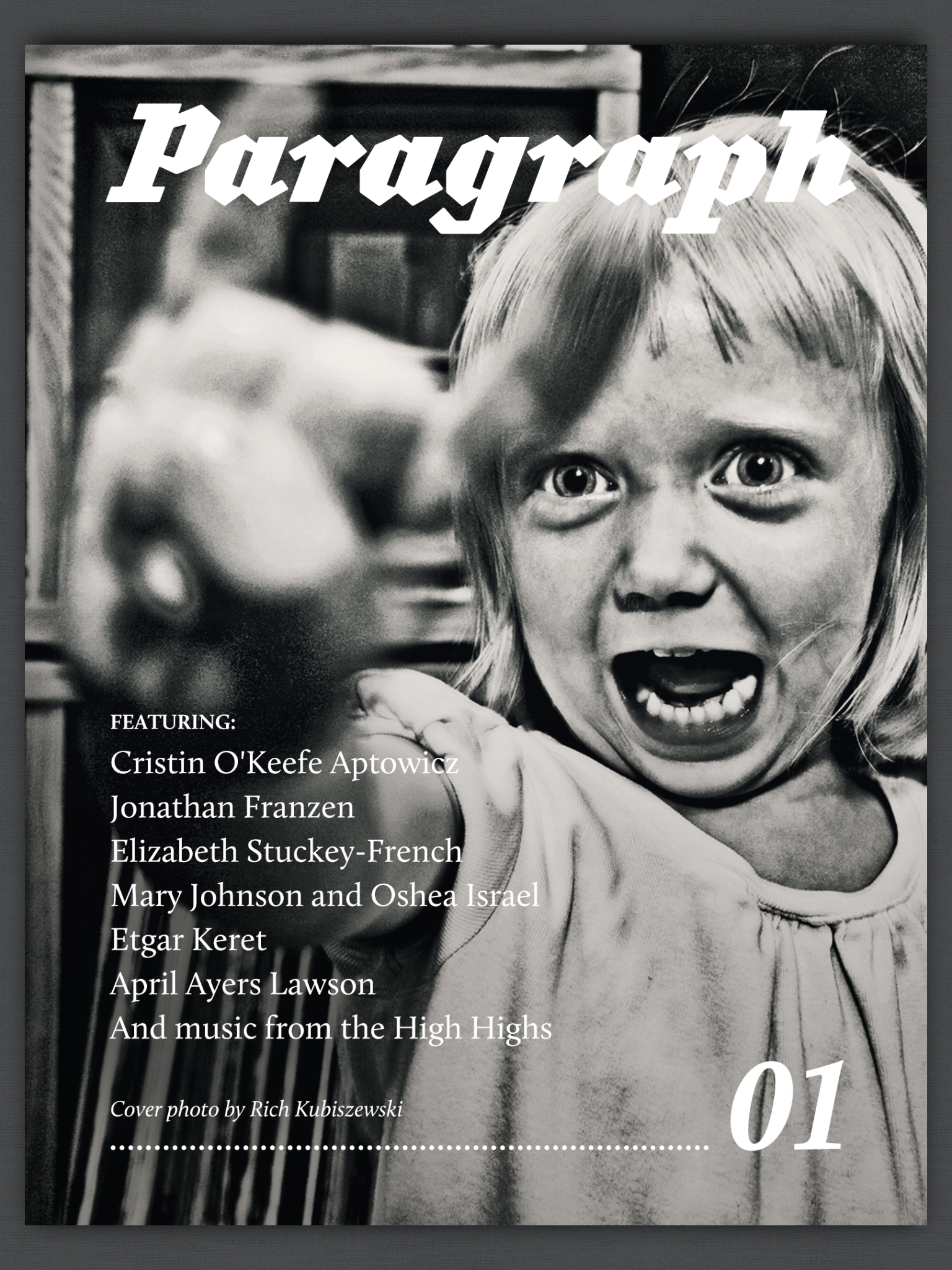 Issue one of Paragraph Shorts

For other publications, such as the New Yorker and Esquire, it publishes the story as it appeared on the original website (the app just displays the Web page within its frame) but presents an option to convert the story to “read” mode. That way, the original publishers benefits from the traffic while the reader gets a well-designed reading experience that suits the iPad. Whenever a story is Tweeted or posted to Facebook from the app, readers are taken to the place where it was originally published.

Navoth, CEO and co-founder of Paragraph, which publishes the app, says he wanted to replicate in digital form the experience of walking down a street and stumbling upon a cool cafe that you just have to go into. “It’s a place and you go there and it’s hard to put your finger on it, but you just have a great experience,” he says. “We wanted to create a more immersive experience.”

That’s the reason Navoth chose to publish Paragraph Shorts as a native iPad app rather than a Web app – he feels that the native experience is still superior to publishing on the open Web when it comes to providing that rich, immersive environment. But that creates other problems for Paragraph Shorts that could put up barriers between readers and the stories. Because they are richly designed, each issue takes some time – about a minute – download. That’s really not a lot of time, but when you’re competing with content that flies around Twitter at the speed of clicks, it could limit the attention the stories within Paragraph Shorts get, especially because the stories are good enough to engross a reader in their own right, without having to rely on rich-media enhancements.

Another problem is that each issue takes up more memory within the limited-space iPad. Again, that’s a competition problem. If a publication of short stories has to compete for space alongside movies, music, other magazines and Newsstand apps, and other apps in general, they might not stay on devices for long.

Paragraph Shorts might ultimately be better off if it were lighter and therefore instantly accessible and easier to get to. It would also be better served if it were available across platforms, another problem that a Web app would solve, so people can read the stories on their phones or desktop computers. Navoth says he is considering breaking the app out into the open Web, and he mentions that when he started conceptualizing the product about a year, apps still seemed the obvious way to go.

In the meantime, he hopes the app can be a be place you’ll go if you have 15 minutes to kill and you want to do it in a quality manner. Key to that experience is the role of curation, which is ever more important in a world in which we’re flooded with content on a minute-by-minute basis, and in which all forms of written content have to compete with each other for the reader’s attention. “A good editor, a good curator can cut through the noise and give you the good stuff.”

Paragraph (not to be confused with the publication, Paragraph Shorts) is a bootstrapped operation housed in a New York-based digital media agency called bMuse, of which Navoth is a partner. It also has a couple of other publishing products, Convertabook, which converts book files into digital formats, and Holopad, an interactive publishing platform for iPad. Navoth wants to build an audience for Paragraph Shorts before he starts experimenting with monetization models, but he is considering at some point charging for exclusive material and added functionality, as well as soliciting sponsorship.

There is reason to be bullish on the future of the story. Even though the first couple of phases of the Internet seem to have increased our appetite for snacky content – YouTube clips, Tweets, Facebook photos, listicles, blog posts, and the like – more publishers are starting to bet on longform narrative. That’s being helped in part by the shift of reading habits to tablets and smartphones, for which readers have indicated a willingness to read longer content. Noticing the trend, a raft of new publications, including Atavist, BuzzFeed, The Verge, and Tumblr, have recently started investing in narrative non-fiction, and the likes of Byliner and Kindle Singles have arrived to enable more longform.

Short fiction, however, hasn’t enjoyed so much digital attention, and Paragraph Shorts represents one of the first concerted attempts to wrench it into the social Web. Navoth thinks that people will be willing to share more short stories if it’s easy for them to do so. “If anything we’ve seen in the last three or four years is a barometer for this, then people share great stories, whether it’s a picture of a cute cat or a long essay that they read in the New York Times,” he says. “People care less about the format per se and more about whether this is actually good or not.”

For the Paris Review editor Lorin Stein, Paragraph Shorts couldn’t have come at a better time. “Our circulation is higher than it’s ever been, but most magazines have got out of the habit of publishing short fiction,” says Stein. What has taken us away from short fiction – whether it’s anything inherent in the technology we use today, or the way we now live, or if it’s just a series of accidents – is a legitimate question, he says. But it’s a situation that doesn’t have to prevail forever, he says. “It seems to me that the kind of problem that dedication, smarts and good technology can help solve.”