If Tencent wants WeChat to go global, it has to stop international censorship

Tencent's WeChat – or, as it's called in China, Weixin – is one of the hottest apps on the planet. In less than two years, it amassed 200 million users and it is already starting to erode the popularity of Sina Weibo, the Twitter-like service that has dominated social sharing in the country for the last three years. Tencent is determined to take WeChat outside of China's borders and has embarked on concerted marketing pushes in Taiwan, Hong Kong, and Southeast Asia. It even has hopes that the mobile messaging app will succeed in the US.

Last night, however, came news that all but assured WeChat will never do well in the US, and could perhaps threaten its success in other countries. Tencent has started censoring "sensitive" words and terms not just in China, but internationally. Tests conducted by the blog TechInAsia have shown that the Chinese characters for the name "Southern Weekend" – a magazine at the center of a separate censorship controversy – are blocked when sent between users in China, Thailand, and Singapore. The name of the magazine was allowed to be sent in English, however.

These are the words that will sink Tencent's US aspirations for WeChat: 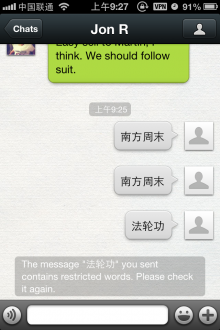 Screncap via The Next Web

This will be a very unwelcome development for many international users of WeChat. If American users in particular know that their private data is being processed and monitored in a hands-on way on China-based servers, they will likely revolt. As a friend based in Vietnam said on Twitter last night, "For me, this would be an absolute, immediate dealbreaker for any app." As a WeChat user, I feel the same way.

In the past, Tencent has blocked other sensitive terms – such as the banned spiritual group "Falun Gong" – on WeChat within China, but this blockade was the first major case of topical censorship on the platform. It's hardly surprising, though, because all other Internet media services and social networks are subject to the same controls. What's more concerning is that this case of censorship has crept out of the country, and that it seems downright personal – the service is apparently determining not only what can be broadcast, but what you can say to your friends.

In the past, Chinese social networks have only had to worry about censorship in regards to users inside the country – because, proportionately speaking, so few users of China's Internet properties access the sites from overseas – but WeChat, which has the potential to be more international, presents a new challenge.

The advent of the mobile age has opened up the possibility for China to compete on a global stage and develop Internet products in parallel with the rest of the world. In particular, many entrepreneurs, investors, and businesses within China consider themselves to have an advantage over their Western counterparts when it comes to expanding into developing countries, such as India, Brazil, and those in Southeast Asia.

Companies like Tencent, Baidu, and UCWeb see enormous opportunity in those fast-growing and fast-developing markets because, in infrastructural and user behavior terms, they bear many similarities to China. For instance, many users in those countries have never had access to a desktop computer, are experiencing the Internet for the first time through mobile, and don't enjoy the advantages of large, powerful data centers or a history of widespread broadband. Chinese businesses also have a track record of monetizing low-on-income but high-on-time users, thanks largely to their success with micropayments and online games.

Tencent reportedly believes that WeChat will one day be bigger and more important than its desktop-based instant messenger, QQ, which has 700 million accounts. That's significant – QQ was Tencent's first and most popular product, and it continues to provide the backbone for the $60 billion company. That's the equivalent of Facebook suddenly inventing a new, equally popular social network. Starbucks, Nike, and Cadillac have already run marketing campaigns on the platform, even though Tencent has said it's not too interested in monetizing the product just yet.

Until now, WeChat has been allowed to spread beyond China without having to deal with a big censorship blowup. Now it's being put to the ultimate test. For users in China, it's business as usual. For everyone else, it's time to reassess.